It’s Independence Day, and the annual fireworks along Lake Champlain are set to begin.

Adam Rankin gets a telephone call from his former boyfriend, Dave Peterson, who’s back in town for the festivities. It’s been a year since they separated and parted ways. Dave has moved from their small upstate New York town to Albany, where he works as a paralegal. Adam stayed behind, working as a chef in a Greek restaurant and feeding the homeless on weekends at a local shelter.

The two men reconnect over the holiday and sparks fly. Can they rekindle the flames between them, or will their romance burn out? Will this be the start of a new beginning? 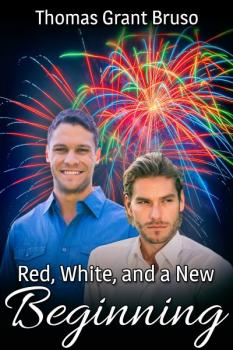 Somewhere in the haste of the moment, I found myself asking Dave back to my place, for a drink, small talk, a reason to keep the conversation alive, and him close to me.

His presence in Oakville rewound a time when life was simpler, happier, and more worthwhile-most of it, anyway.

I was testing him, teasing with my choice of words ("What does a man have to do to get some decent company around here?"), reeling in the bait as unwavering, fast and cleverly as I could.

Although when we got back to my apartment, something in Dave's charming demeanor turned dour from the easygoing man I had met earlier that night. I heard the click in the back of his throat; he made it when he was anxious about something, had a hard time to come right out and say it, or when he felt vulnerable, cornered like a caged animal.

"I need a drink," he said, nonchalantly, the tone of his voice taking on a heaviness, someone who was in trouble.

"Does a teenage boy live here?" he asked stepping around the chaos of week-old clothes strewn carelessly around the room and fast food containers crumpled on the floor next to my X-Box machine.

"The latter," he answered, tossing his coat over the back of the recliner, and smiling.

"You were always a hard liquor kind of guy." I turned and headed into my kitchenette, a shoe box-sized space designed for one. Opening the corner cupboard and reaching for a short, thick glass, I heard Dave mumble, "Your place." He said it as though he was making a vaguely strange remark about my life.

He rolled up his blue-and-white checkered sleeves and marched further into my already messy existence. "You had your life in order a year ago." He opened up his hands, a quizzical expression on his furrowed face.

"What's that mean?" I asked, handing him his drink and wiping my sweaty hands on my pants.

He sipped it, winced, and smacked his lips. "Our life wasn't as cluttered as yours is now, that's all I'm saying." He shrugged, his language loose and cutting.

"Hoarding can be unhealthy."

"So is living alone."

Dave turned to the window so I wouldn't see him smirking. He lifted the glass, emptied it.

"Want another?" I asked.

"No." The lines in his forehead deepened as he bit back the biting sting of the drink going down. He handed me his glass.

His middle and forefinger brushed the tops of mine, a mutual satisfaction. Our gazes locked.

"You hungry?" I asked, scrambling for something to say, the awkward moment lingering too long.

Dave pulled away, and turned, rearranging a small pocket of space on the cluttered sofa, pushing aside a pile of unread newspapers and mystery magazines onto the cushion next to him before sitting down.

I wiped sweat from my face. "I'll turn on the A/C," I said, reaching behind him in the window and cranking the dial to high cool.

I plopped myself down on the recliner, letting out a contented sigh.

"It smells funky in here," he said.

He waited for me to continue. "Chinese takeout," I said.

"Have you forgotten how to cook decent, more substantial meals since our life a year ago?"

He grinned, showing me his unnaturally white teeth. "I see you haven't lost your sense of humor."

"I've lost everything else since us."

Dave shook his head, grunted unenthusiastically, as if my pity party for one was nauseating.

The air was heavy and solid, and the elephant in the room was excruciating; it was hard to breath or think logically with so much pressure pounding on my chest.

After a painful moment of silence, I asked, "Why are you here?"

He looked up from staring down at his wringing hands. "To see you."

"After a year of not talking on the phone. No emails, or Skype, or Twitter. You even stopped following me on Facebook."

"I didn't think our friendship was."

"Our breakup wasn't amicable," he said.

I rolled my eyes. "What did I do to make you hate me so much?"