After Zoe Cohen catches her boyfriend with another woman, she decides losing her virginity is just the solution to shake up her straight-laced life as librarian. Tired of waiting for Mr. Right, she’ll settle for Mr. Do Me Right Now. To achieve this end, she uses the exclusive dating service, 1NightStand, to set up a rendezvous, but never expects her destination to take her to the fey Otherworld. Once she meets her match, Sinnon, a wickedly seductive Leanan Sidhe, she knows she’s in for an explosive experience. With a name and body for sin, he tempts her like no other. His touch commands her total surrender. But this night is on her terms, and the happy ending he desires may come at too high a price. Zoe may lose her virginity, but will she forfeit her heart to Sinnon in the process? 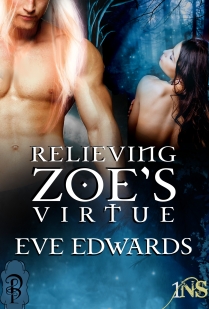 Dressed in fantasy-faire clothes, the men put her wardrobe to shame. Supple leather pants hugged rippling leg muscles and contrasted nicely with the silk and linen shirts spread over broad chests. Oh yeah, she swam in testosterone land. Long hair rivaling the colors found in a crayon box spilled over their shoulders. Geez, these rejects took their role-playing fantasies a bit far. Did they dye their hair or are they wearing wigs? That was the question of the day.

She shook an inward finger at herself. Time to be serious. Had the loonies slipped through Madame Eve’s screening measures? Her gaze wandered up to their faces. Big mistake. Just like their bodies, their countenances were made up of ruthlessly perfect lines.

What were a gaggle of models doing there with her, anyway? As she examined their features, a sinking feeling settled in her stomach. Their cruel beauty screamed something other than human. Glowing hair and eyes the colors of the rainbow and, yes, pointed ears rounded out the otherworldly package. The whole effect seemed too convincing to be an act.

The men…creatures…crowded around her and gave her smiles full of sharp teeth. One with dusky blue hair bent over her and ran a finger down her cheek, and she cringed backward. What the hell did he think he was doing?

Blue Hair licked his lips. “Oooh, a new toy! A pretty human has fallen into our midst. Have you come to play? We’ll have so much fun.” He looked up at the others and gave a predatory smile. “She’s intoxicating, isn’t she?”

Terror encased her heart, and she scooted back on the couch until she hit something hard. Craning her neck, the sight of more leather-clad bodies barring her way startled her. Hightailing it out of there sounded good right about then, but she hadn’t a clue as to where she was. Shit, what if one of these psychos is my hook-up? Would he even protect her? She was so going to sue Madame Eve and 1Night Stand…if she made it out of there alive.

Her heart rate took off like an airplane, and her raspy breathing filled the room. The males’ presence suffocated her. All her synapses fired for escape, fear threatening to shatter her into a thousand pieces like a china doll.

“Fools, get away from her.” A silky voice cut through the silence. “She’s mine.” 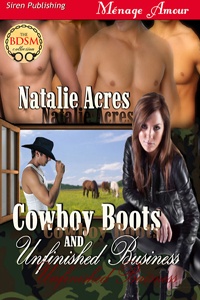 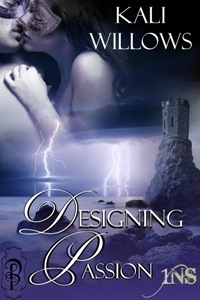 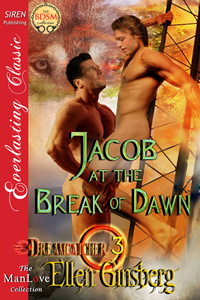 Jacob at the Break of Dawn (MM)
Ellen Ginsberg
In Shelf
$5.99