When fourteen-year-old Keth's dad is transferred to planet Aleyne, he doesn't know what to expect. Certainly not to discover Dad grew up here, and studied with Ardaval, a noted Aleyni scholar. On Aleyne, Keth’s psi ability develops. However, psi is illegal in the Terran Federation. After a dangerous encounter with two Terran teenagers conflict erupts between Keth and his father. Keth seeks sanctuary with Ardaval. Studying with the Aleyne scholar Keth learns the truth about his own heritage. After Keth's friend's father, Mazos, is kidnapped, Keth ignores the risks and attempts to free him. Little does he realize who will pay the cost as he becomes involved with terrorists. 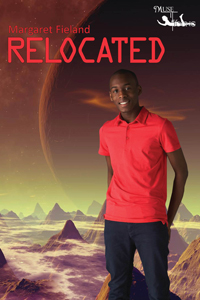 The walls of the entry-way felt as if they were closing around me, and I paced from one side to the other.

Ardaval said, "Have you decided what you plan to do?"

Ardaval took me by the arm and propelled me toward the library. “While you decide, you can study more of Raketh Namar’s poetry.”

“Are Shaffa and Darus coming over today?” I hoped so. I wanted to talk to Shaffa, convince him my way would prove right.

“Later this morning.” Ardaval pushed me gently into a chair. “Try to concentrate.”

Ardaval set me to studying Looking for my Fears.

Looking For My Fears

Muted buzzing in my ears

to cleanse my mind, root out fear’s blight.

Darus and Shaffa trooped into the library shortly after second meal. I glanced up from studying to find Shaffa staring down at me.

“Have you decided to mind your own business yet?” Shaffa crossed his arms over his chest.

I shook my head again.

“You’re a gorag.” Fat lot of support I got from him. I glared at Shaffa and stomped out of the library and into the courtyard to study. The usual brilliant sunshine did nothing to improve my foul mood.

Behind me Darus said, “His the choice.”

I continued to study in the courtyard, and Shaffa and Darus stayed in the library. We didn’t exchange another word all afternoon, but Shaffa couldn’t block the anger and frustration he radiated. I wanted to punch him. By bedtime, I hadn’t come up with a single useful idea.

I climbed into bed, trying to breathe evenly, hoping to calm myself. When the whirling in my head slowed, I entered a state of razan, picturing myself approaching the port, walking around, and finding Mazos. I pictured myself talking to him. I tried to picture his captors, but their faces refused to come into focus. Finally I fell asleep.

I dreamed about the alternate futures, just like on the mountain top. First I dreamed of my Aleyni lovers. We gathered in a softly lit room. Pillows decorated the floor, and we were kissing. All of us. The dream dissolved and I stood in a bedroom putting on my Space Force uniform. The older Henrietta lounged on the bed, and I realized we’d been arguing. Both dreams refused to come clear, like a day when the fog rolls in. I woke shaking, my throat dry, too tired to do more than gulp some water, roll over, and let sleep reclaim me.

A new dream started. I found myself strapped into a chair. Someone stood in front of me and another man stood to one side. I heard nothing of their questions or my answers. Real, except I observed only. This dream dissolved, and I started another. This time I stood in front of a building, and again I heard nothing, but my dream-self shook, afraid.

Right after first meal Shaffa and Darus arrived. Shaffa stomped over to the table in the library where I sat and glared at me.

“You’re going to try sneaking onto the port, aren’t you?” Shaffa’s whole face appeared tight and his voice radiated disapproval. “It’s not your task to do.”

My stomach churned whenever I pictured Mazos at the port, and anger pushed red up my neck. “It is mine. Mazos would never have been captured except for me.” Why couldn’t he see things my way?

Shaffa’s voice rose. “You didn’t snatch him. No one controls another’s choices. We make our own decisions,” Shaffa shouted.

I stared at Shaffa. “My choice is to sneak onto the port. Better than sitting here, doing nothing, the way you do.” I couldn’t understand how Shaffa could simply sit by and wait for Noki and Amiz to decide what to do. If strange men ever snatched my dad, I’d be after them in a minute. I’d never understand the Aleyni.

“Just like a Terran, rushing off to action without considering every option.” Shaffa slapped the table in front of me, and I jumped up from my chair, aware my whole body shook.

“What do you suppose those soldiers are doing to Mazos they couldn’t do to you? Have you considered that? How will having both of you in their hands help Mazos?” Shaffa’s voice sounded low, and he gritted his teeth and clenched his hands into fists. He looked like he wanted to punch me “You have no idea who took Mazos, why they took him, where they took him, or that any of it is in any way your fault. You're a gorag for assuming you know all that. All Tagga said was the men who snatched Mazos claimed he was an anti-Terran sympathizer and they were going to make him talk.”

“Brad would never do anything like that. Terrorists must have snatched him, and we know they were Terrans, so he has to be at the port. Where else could he be? ” I pictured myself doing nothing while Mazos endured torture or whatever. I’d never be able to live with myself if I did. “I’ll feel better if I do something.” I glared at Shaffa, defying him.
“Well, learn to accept the consequences of your actions instead.” Shaffa stomped off. I stared after him. Sickness rose in my throat. Would Shaffa ever forgive me?