Grieving the loss of her beloved father, Chellie is convinced to take time off from her work-a day job to enjoy a secret retreat at a hidden Oahu bungalow. Property of the womanizing ex of her best friend, Chellie agrees only after being assured her privacy.

Overworked, burnt out and sour on life, Scottish film star Cameron McClain nearly had to be hog tied by his manager to take a holiday at his secret escape destination on the Hawaiian North shore. Two lonely people overwhelmed by life…same time, same gorgeous locale. Reluctant guests alone on one of the world’s most beautiful islands---except they are not alone…. 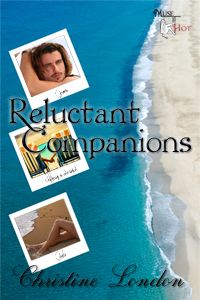 A movement, a shadow disturbed her peripheral vision just enough to jolt her from her uninvited anguish. Forcing her senses to sharpen, she sniffed back the need for a tissue and tiptoed to the edge of the lanai. Wrong part of the world for Sasquatch, she thought, briefly wondering if the Hawaiians had similar legend. Too laid back…Polynesian paralysis would prohibit such disturbing musings. They were the invention of overworked, stressed people trying to escape the insistent demands of the modern world. No such burden here in the land of Mahalo and hang loose.

It occurred to her that it was not the world she’d just left behind. She was about as far away from relaxed as an over processed perm.

The rain had ceased, the liquid chorus continued from every leaf and petal as they shed the weight of the passing storm. Straining to differentiate any foreign sound from the thrum of droplets splashing along on their journey from foliage to earth, she held her normal breathing in check, mouth open as means of silencing her own autonomic noise. Scrolling the immediate horizon like a cat burglar avoiding detection, she reached for the bamboo railing to steady her.

Bounding through the slick underbrush flashed the silhouette of a man in forward trajectory, a parabola of doom the likes of which she’d not seen since her friend Jill had taken a spill off her snowboard on the slopes of Lake Tahoe’s Diamond Peak. That had cost Jill six weeks in traction and her gift for belly dancing.

“Shite.” The ensuing male explicative sounded like the fated call of a condemned man.

Undergrowth rustling, banana tree quaking, the ground cover had swallowed whoever it was that had evidently survived the fall. A part of her didn’t want to stick around to see what emerged from the forest floor, but her sense of philanthropy held in check her initial urge to turn tail and run. The banana tree shook violently a long moment later, large elliptical leaves bending, seeming to disappear into the undergrowth as though some great herbivore were consuming them.

It took Chellie another indeterminate amount of time to realize her jaw was slack and she was indeed gaping at the commotion in dread and morbid anticipation. Like a newborn colt standing for the first time, the specter of a man emerged from the plants, body slick and smeared with the russet earth, hair drenched, spaghetti-like in wild abandon, frame struggling to attain upright stature in a curious combination of strength, embarrassment and anger. Whites of his eyes glowing in the dusk, he continued his colorful diatribe.

His eyes snagged on her, his expression escalating from irritation to rage. “And who the fookin’ hell are you?” He evaluated her face a second longer, realizing that her eyes were dropping to inspect him…the whole of him…filthy, wet and… “Shite,” he rasped again, yanking the banana leaves he held at his sides at lightning speed to cover his privates. The ensuing image of him was of a Michelangelo statue run through the mud, covered by a mutant fig leaf.

She clung to reason just long enough to see the humor in the image before her. She also couldn’t help but notice that the man was spectacular. In the light of the ascending moon, his skin looked like polished marble slick with sweat and dirt, but undeniably sculpted. And the effigy of his face was worth the price of admission alone. He was the most extraordinary surreal mixture of anger, self-reprimand and pure animal earthiness.

“The owner of this private estate. So take your damn banana leaves and get out.” She struggled to maintain an expression worthy of being taken seriously, feigning the sudden need to wipe at something at the corner of her mouth.

“So you’re a squatter as well as a liar.” He looked up at her in inflamed irritation. “I’ve the keys to prove you wrong.”

“What keys? There’s not a door within twenty miles.”

“That’s where you’re wrong. I’ve the true owner’s jeep parked just the other side of the stream leadin’ here.”

She leaned further over the railing in growing indignation. “And that’s supposed to convince me of your authenticity.’”

He moved forward, making his way to the stairs that ascended to the lanai. “I’ve me bleedin’ gear in the bedroom to—.” He paused half way up the steps, rotating one of the banana leaves to cover his rear. “Why the hell do I owe you any explanation? I’ve been here three days now and have no intention of sharin’ the surroundin’s with some…some…woman.” The final word he emphasized with particular disgust.

She instinctively backed away, he presenting a very large, threatening countenance that screamed menace. Reaching for a cylindrical shape on the lanai table, she kept her eyes on him. Grasping it by Braille, she raised it over her head like a nightstick.

His expression melted from angst to humor in a flash. “What ya goin’ ta do, spray me to death, woman?” He snorted, tension draining from his body like water through a sieve.

She shot a glance to the object in her hand. Bug spray? Shit! Stay cool. Raising it higher over her head, she shrieked, “Back off, buddy.”

His abdomen contracted in mirth. “Unless you’ve been trained in the modern martial art of fumigation, I think I’m safe.”

“Fine, smart ass, but you’re gonna have to…” She slid her eyes to his groin and back in one lightning glance. “…Drop your leaves to get it away from me.”

He folded over in a spasm of laughter. She moved toward him. In a blink, he recovered full stature. She froze.

“It appears we’re at a stand off.” He pulled the leaves tighter against his body. “Let’s compromise. You put the insect repellant back in its place and I shall relieve you of the substantial burden of havin’ a naked man on the doorstep.”

She lowered the can. “Now you’re talking. Five minutes to get your stuff and hit the road. "