A haunted ocean liner, a woman with a family mystery to solve, and a man who can talk to ghosts—what do they have in common? A timeless love and the very real threat of murder, that’s what. Lisa, a host for the TV program Ghost at Home, and Michael, a medium also for the program, share a past together. But it remains to be seen if they have a future…. When the program gets offered to spend a weekend of ghost-hunting on The Gem of the Sea, Lisa sees her chance to discover what really happened to her mother the day she died on the great ocean liner. But over the course of one passion-filled weekend, Lisa and Michael must fight a malevolence the likes of which neither has encountered before. Will they win or become two more of the unquiet spirits haunting the old ship? 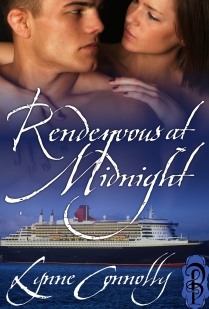 When she arched up to him, he felt her hands on his bare chest, caressing his nipples, tweaking them, and he couldn’t stop. Not that he wanted to.

Lifting up, he looked down to where she touched him and then smiled. “You’re ahead of me.” He slid the button on her blouse open but stopped when she twitched nervously. “What is it? Is there anything wrong?”

His heart sinking, he leaned to one side and watched as she sat up. She gave him a wry smile. “No, not that.” Glancing down, she began to undo the buttons herself. “Continuity.”

He rolled on to his back, laughter taking him. “I forgot. You only brought one?”

“Yes. I brought another outfit to do the intros in, and I have two of those, but we’ve started to shoot, so I’ll have to keep these reasonable.” She chuckled, joining in with his amusement. “I could send them to the laundry, but it’s probably closed.” She slipped the blouse off her shoulders and his laughter died. She shot a look back at him, over her shoulder and caught his expression and she stopped laughing, too.

He saw her swallow before stepping across the room to the closet and pulling out a hanger, which shook a little. Good. This encounter made him nervous, too. He desired her more than he could remember wanting any woman before, and if it went wrong somehow, he didn’t think he could live with himself.

When she unzipped her pants and slid them down her legs, it was his turn to swallow. She kept her back to him while she draped the pants carefully over the crossbar of the hanger and settled the crisp white blouse over the top.

With every sinew he possessed yearning to leap off the bed and grab her, Michael forced himself to lie back and enjoy the view. There was a lot to enjoy. Smooth, fair skin, curves he ached to run his tongue over and cup in his hands, only separated from him by the length of the room and her underwear. A white satin bra and matching panties. He doubted they would be as smooth as the small amount of skin they covered, but he’d enjoy taking them off.

She came back to him and his whole body sighed in relief, as though afraid she might have carried on, walking out the door. Her smile said otherwise.

“Oh baby,” he managed, before dragging her back into his arms, where, for now at least, she surely belonged.