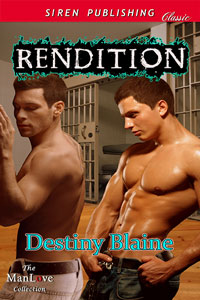 Heat Rating: Sextreme
Word Count: 30,281
4 Ratings (5.0)
Contemporary Alternative (M/M, Gay)
In Bookshelf
In Cart
In Wish List
Available formats
PDF
Mobi
HTML
ePub
Cover Art by Christine Kirchoff
Reviews
Lawyer and Forrest are victims of circumstance when they try to get Forrest's kid brother out of a bad situation with drugs with the local gang, they end up inadvertantly being in the middle of a huge drug bust which they end up going to prison for. On their ride from county to the prison, they meet Big David. He sets some rules and lets everyone know he runs the prison and if he wants you, he gets you.
Can Lawyer and Forrester find their way safely through prison when the kingpin has targeted them both? Or will Lawyer's claims of Forrest being his open up a whole new level of mistrust? Sometimes digging down deep and admitting the truth to yourself is the hardest thing to do.
Once again, Destiny Blaine has given me everything I wanted and more!!

Shirley W.
This is the 79th book of Destiny Blaine's offerings that I have read. Offhand, I cannot remember one that I didn't like, but for me, this one rates within the top three! The book blurb covers the storyline amazingly well and with the authors seasoned talent, she executed this storyline with precision and professionalism that many authors must envy. I've noticed that her recent books have changed slightly. She is now more raw, edgy and current and not afraid to push certain boundaries that some authors shy away from, I admire her courage in pushing her readers to these boundaries and an example of this, is the male rape scene within the first few pages of the book. I predominantly associate Destiny with "ménage" which she is undoubtedly the "Queen Of" but all m/m writers beware! she is out to steal your limelight and readers and I have no doubt that she will succeed!
Lorraine L.
Read more...
Excerpt

“Don’t you think I’d remember if you were seeing someone on the sly?” Forrest was suddenly on the defensive. He shook his head adamantly. “No, you weren’t seeing anyone else. I don’t remember anyone. You were pretty much a homebody. The only time you left the house was when you were with—”

“Say it.” Lawyer’s voice was thick with lust but he didn’t try to hide it, and as he stalked him, his body went rigid. His cock was bone hard. “I want you to say it, Forrest.” He also wanted to take another kiss and then another. He wanted Forrest down on his knees, sucking his cock, nuzzling him with his cheek, and staring up at him like he wouldn’t barter or trade for any other position.

“You weren’t seeing anyone else,” Forrest deadpanned, putting some distance between them by turning his back to him and gripping the bars.

“Matter of opinion.” Lawyer glanced down at Forrest’s ass. One thing about those prison pants, they showcased a fine male tail.

He immediately became on guard. If he’d noticed Forrest’s tight butt looked good in orange, others would, too. Shaking off the weird possessiveness he found quite disturbing, he asked, “See anyone out there yet?”

“That’s comforting. With your lungs and no one showed up? That should tell us something.” Lawyer turned his attention to the security camera. He wondered who was watching them. Was someone on the inside reporting back to Big David? Would David receive insider intelligence about what happened in their cell or was he behind the camera watching them now?

“It tells me we’re all alone down here.” Forrest stepped in the corner and untied his pants to take a leak. As he stood there relieving himself, his back stiffened. His breath grew ragged. He hurriedly yanked up his pants, flushed the toilet, and haphazardly washed his hands.

“Don’t worry. I won’t come on to you while you’re standing at the pisser.”

Seemingly aware of every transparent drop of water falling to the floor, Lawyer swallowed back any limited fear and admitted, “Carmen accused me of having a thing for you.”

Forrest smirked. “She tried to convince Michelle of the same thing. Michelle asked me about it.”

“How come you never said anything?”

Forrest climbed up to his bunk and grabbed a sports magazine. He rolled on his stomach and flipped through the pages. “It didn’t seem important at the time.”

“Maybe it can wait.” Forrest took a deep breath, mouthed a few words, turned a couple of pages, and added, “Besides, I’m talking to Big David on the worksite. We’re working out a—”

Lawyer slapped his hand against the magazine, crumpled the pages, and tossed it aside. His belly was in his throat. His heart was in his hand. “What are you saying? What do you mean you’re working out a deal? When did you discuss a deal?”

“While you were talking to other prisoners in the chow line.”

“What kind of deal did you work out, Forrest?”

“I’m not sure yet. We’re discussing it on the site.”

“So you already knew you’d have job detail with this monster?”

“Suspected, yes.” Forrest was too calm.

Lawyer narrowed his eyes. “You’re not telling me something.”

“I’m telling you what I know.”

“And pretending you’re just a-okay with this?”

Forrest came to an upright position and swung his legs over the bunk. “I am a-okay with this, Lawyer. When I walked in here, I didn’t come here with the same pretenses you mentioned. We’re in a maximum security penitentiary. I’ve been told what to expect. I know what can happen. My father spent most of his life in one of these five-bar establishments.

“On the bus you talked about tests and trials. My first one is today at twelve. You asked how far I’m willing to go to stay alive. Well at the moment, I don’t know. I can’t answer that, and maybe I’ll never know.

“I’m not like you, Lawyer. I’m not strong where others are weak. I’m not brave where others are cowards. I’m not capable when others are failures. I’m in that crowded majority that is expected to look up to people like you in situations like these and just do what I’m told.”

Lawyer walked around to the side of the stall, peered out to make sure no one was looking, and then bracketed his arms around Forrest’s middle. Mashing his cock against Forrest’s erection, he whispered at his ear and asked, “Is that what we are, Forrest? Are we lovers now?”

Forrest cocked his head and released a lust-laden hiss. “This is bound to get us in trouble. We don’t want time added to our three days.”

“Tell me about it,” Lawyer said, sliding his hand inside Forrest’s pants and tugging his cock. “Hard time has been a bitch.”

Forrest laughed and nipped at Lawyer’s lips. “It could’ve been. And it still could be. David is looking for one or both of us to satisfy him.”

“The David situation is handled.”

“No one handles David, Lawyer.”

“I do,” he whispered, stroking him. “Damn you’re so fucking warm.”

“Is this why you wanted me transferred? So you can play with me whenever you want?”

“What will they say if they catch us? Hmm?” Lawyer pulled up and pushed down, gripping Forrest’s cock with a heavy hand. “They imprisoned two innocent men, and now they know it.” He backed him against the concrete wall.

“True.” Forrest turned around and placed his palms on the ledge, spread his legs, and never even flinched when Lawyer yanked his pants down.

Lawyer stripped away his pants and cradled his own balls. “I’ve been reading some interesting material.”

“Uh-huh,” Lawyer crooned, rotating his wrist as he stroked him, twisting him gently one way and then another. “I’m pretty sure you’re a power bottom.”

“It’s not that.” He frowned. “I’m not interested in labels.”

“Maybe not.” Lawyer licked Forrest’s lobe before he slapped his butt. “But I bet I can interest you in something else today.”

“Let me get you wet.” Forrest shoved his cock in Lawyer’s hand. “Let me give you head. Let me feel those heavy balls at my chin, your cock swelling inside my mouth.” He threw his head back. “Oh God, Lawyer. You’re making me—ah fuck.” He swayed hips from side to side. “Let me make you come.”

Before Lawyer could protest, Forrest was on his knees in front of him, going at his cock with a lathering lick. He glided over Lawyer’s shaft, up and down and up and down again.

Lawyer’s hand rested on top of Forrest’s head. In his periphery, he saw a bale of hay. The mare behind them stirred, stamping at the ground as if she were irritated because two humans were fucking in her stall.

Electrifying sensations rushed through Lawyer’s cock as Forrest rode him with his mouth. Still, he needed more.

The slurping sounds of oral sex drove him insane. He pounded Forrest’s constricted throat, loving that wicked swipe on the underside of his cock.

Still, he wanted something more meaningful. He needed an absorbing kind of closeness, more intimacy.

“Come here.” Lawyer tried to force him to his feet.

Forrest’s mouth stayed on Lawyer’s cock. He came to a squatted position and looked up at him with those heavy, lust-filled eyes.

“God bless! You’re killing me here!” He grabbed him under the arms and hauled him to the hay bale. As soon as he sat on the prickly seat, he pulled Forrest to him.

Facing outward, Forrest sat on Lawyer’s dick, sighing as Lawyer impaled him. He draped Lawyer’s legs with his own using his feet to pump his body up and down at a rapid pace.

“Fuck yeah.” Lawyer gripped his waist and guided him.

“Grab hold of your dick,” Lawyer said, coaching him.

“Hell no,” Forrest said, bowing his head. “This is fucking hot.”

Lawyer wished he could see around him. He closed his eyes and imagined the image they created. He pumped harder inside Forrest’s channel as he fantasized about looking on from the front. Forrest’s fuck face would be marked with pleasure, forthcoming satisfaction as his thighs tightened against Lawyer’s.

His hard cock would jiggle one way or another as he thrust at air. The sexy image was just too much. More than anything else, the realization that the picture in his blasted head was very real in that moment made him hornier still.

Damn it, he wanted his cake and wanted to eat it, too! He longed to watch and see how good they were together.

As soon as they were released, he planned to watch. They’d make their own home movies and enjoy hours upon hours of positional play, working out together as they discovered the best fuck positions for the most intense man loving.

Lawyer grabbed Forrest’s hips and slammed him back against him. He pushed him forward and rammed him once more.

“There we go,” Lawyer crooned.