Fiery and stubborn Madeline Raburn never thought life on her own could be so trying. The daughter of an influential New York businessman, Maddy has always had the best of the best…as long as she abided by her parent’s wishes. When sent to Italy to meet their choice for a potential husband, she enforces a respite from her overbearing family. She thought running away might be the answer, but when she meets Ryan, her situation becomes a little more complicated…. Honorably discharged Sgt. Ryan Davison has traipsed through Europe for three years, compliments of the U.S. Army and the war against the Germans. Now tired and in desperate need of rest, he’s determined to forget the pain and deaths he’s encountered. Landing in a quiet harbor town in Morocco, with its sultry weather and tantalizing views, he believes he’s found a quiet respite from the haunting days of war, until Maddy stumbles into the bar…not looking for trouble or love, but finding both. Life takes a drastic turn for Ryan and Maddy as their building attraction tempts them into the exotic world around them, but will they have to fight for their passion and love once their past catches up with them? 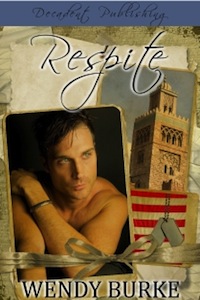 Madeline was hot, thirsty and dirty. She wanted to sit under a moving fan in an unladylike manner. chug a few continental beers, and then wash her face…and in that order. Maybe she had entered the establishment a bit more noticeably than she would have liked; after all, she wanted to appear she actually belonged in this part of the world as opposed to running away from another. She centered herself, took a deep breath and tried not to get angry with the somewhat backward way of thinking that many of the men in this region exhibited.

“No ladies!” the bartender admonished, “No alone ladies.” He waved his hands across the bar, insistent that she not sit. Ignoring the barkeep, she stripped off her fedora, shaking out her thick, dark curls. “No alone ladies.”

Madeline tossed her hat on the bar, then carefully eased herself onto a stool. After stretching her neck for another good look out into the street, she relaxed a bit. Without thought of local mores, she dug into her shirt and pulled out a slightly damp ten franc note. “Whatever you have that’s cold will be fine. I have my own money.” The owner glared at her. Maddy was sure he’d never seen a woman touch herself in public in such a manner. “I’m not looking for a date…I’m not a prostitute.” His eyes widened, but it didn’t faze her. “Listen, I’m hot, you have cold beer and I have money. Let’s do business.”

“Fahz, give her a beer,” a male voice called.
“You vouch, Mr. Ryan, you vouch?” The proprietor wanted to know.
“Give her two, Fahz, my tab.”
Madeline turned toward the comforting American accent. “Really, that’s not necessary.” She hadn’t travelled alone all this way the last two months, to suddenly need the assistance of a man. Especially since she was still trying to make sure she had ditched the two who thought she needed their accompaniment. She was a young independent woman and could take care of herself. Her autonomy came much to her parents’ dismay. They were the old-fashioned type, wanting her to find a nice young Italian man, settle down and happily crank out a plethora of progeny. That life was theirs, however, not hers. Maddy wanted adventure.

As much as she flaunted her unwillingness to need the assistance of the male gender, one glance into this American’s cobalt eyes had her thinking about bending her own rules. Maybe she could make an exception.