Resurrection: Stephanie After the Lilithan

In Professor James’ final tale, former Lilithan vampire and newly divorced scientist Stephanie just can’t get over how much she misses being a vampire. After a harrowing car accident during a frightful storm, Stephanie meets Mestiphles, the giver and taker of vampire power on both sides of the coven wars. His charm and seductive powers sweeten the demonic offer he extends, but will Stephanie accept Mestiphles’ dark opportunities? 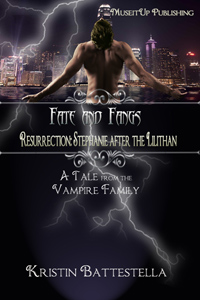 Resurrection: Stephanie After the Lilithan

I wouldn’t be driving home alone late on a dark, rainy night like this if I were still married to Dr. Appolito. No, the sun would be shining, no traffic would stand between the Museum day job and the casual suburbs were he here to drive and chatter like the happy days before the Lilithan. Yes, our union ended not long after our encounter with Lilith. Over those long months, she became the phantom wedge between us.

“Do you ever think about her?” I asked him one night as we climbed into bed. It seems like such a long time ago, when we could pretend things were back to normal, as if immortality and death and vampires had never touched us.

“Think about whom?” Michael lay back on the pillows, content with the remote control. Was he ‘cool’ with it or merely oblivious to my difficulty? Does it really matter either way? He stared at the television, seemingly not hearing my words or meaning.

“Lilith.” I asked again, “Do you ever wonder what happened to her?”

“Lilith has never crossed your mind?”

Michael looked at me, sincere, but not understanding at the same time.

“Only when I think about how thankful I am we’re rid of her.”

I knew then our marriage was over.