Business magnate Luca Venancio is returning to Rio to pay his respects to his late brother, and to seduce his once fiancée, Daniella, back into his bed. Five years ago she left him without so much as a word, shunning him and the rich life he could offer in exchange for his younger, reckless brother. Now Luca wants revenge—seduce her and dump her, that's all he intends to do.

Blackmailed into a violent farce of a marriage, Daniella had no choice but to comply to protect Luca's life, even though it meant never being able to see him again. Years later, a twist of fate reunites them, throwing her plans of fleeing Rio out of the window and the love of her life straight back in.

Luca's flawless plan soon becomes complicated when he discovers Daniella is expecting his brother's child. It becomes even more complicated when old passions return. Can he actually go through with seducing her, bedding her, and then discarding her? 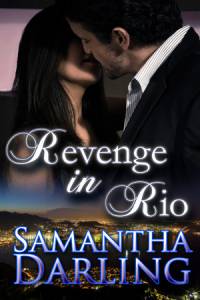 "I was dazzled by the story" Liezel's Book Blog

"...it made my heart ache, and made me cry. I love the pacing of the story, the characters and the twists that come along with it." Book Freak

"If you are looking for something with sizzling sex, lovers reunited, heartbreak, and a beautiful story line that is short, this book is perfect book to curl up with and spend the afternoon reading. You don't want to miss this." Escaping Reality One Book at a Time

"I loved it." Romance Bookworm

"I will get out here," Daniella said, reaching for the door handle.

"No, keep driving," Luca ordered, glaring at the chauffeur and pressing the central lock button.

Although he hadn't been back to the house, he clearly remembered where his brother had lived. It had been his parents' home and he'd grown up there. He would never forget the decrepit building that had desperately needed restoring. Paint had chipped and flaked off of the dreary walls, and the rooms were so small they felt claustrophobic. He'd spent many nights sitting on the roof listening to faint arguments between his parents, whilst he dreamed of a better life.

"You don't think I at least deserve an explanation? Some minor clarification as to why you just left me in the dark?" Luca stared at her intently, and she opened and then quickly closed her mouth again, biting down on her bottom lip until it darkened to a deeper tone of pink.

He kept his eyes on her, not even blinking, as he looked her up and down. She was a shadow of the vibrant girl he remembered; the Daniella he had known five years ago. Sitting beside him now she was scared, the fear was wild in her eyes, and she was clearly malnourished, evident from the black sack of a dress, which hung off her delicate frame.

"When did you last eat something?" It was more of a demand than a question.

"Excuse me?" He finally had her attention.

"You heard me. When did you last eat something?"

"That's none of your business." She pulled the cardigan tighter around her midriff and turned away from him.

Fair enough, she may have been grieving for the last twenty-four hours. It was bound to have been a grueling short space of time for her to comprehend Miguel's death and have the customary quick funeral. But what about before Miguel's death? The circles under her eyes and fading blue marks across her jaw were old; her skin and hair were dull and lifeless and told a story.

They sat in silence as the chauffeur strategically maneuvered the Bentley through the favela's never-ending maze of winding roads, passing makeshift house upon house, small street markets, and gangs on each corner. Luca's eyes fixed on the house in front of them when the car eased to a halt a few meters away from their destination, and he recognized it instantly as his childhood home.

Reaching for the door, Daniella pulled on it a couple of times before he pressed the central locking release.

She looked over her shoulder and whispered, "You really have to go now."

He had given in far too easily years ago, this time he was a different man; a man who always got what he wanted, however cruel and ruthless he had to be. He had to remember that. Love had left him weak and feeble. It had taken time to gather himself and learn to never let emotions take over. Work was his haven, a place for him to focus and throw himself and his energy into. He would prove to Daniella that she had made the wrong choice.

Placing a hand on her shoulder, Luca's fingers brushed against her dark curls and the nape of her neck. "I'm not going anywhere this time." He leaned closer, his gaze fixed on her mouth. "I've come for something and I intend to get it."

Be Your Everything (MF)
Peri Elizabeth Scott
In Shelf
$2.99