Vanessa Franklin is a physician in England. When a handsome, half-naked man staggers into her hospital and collapses she does her utmost to save him. Yet he arouses her in ways she scarcely thought possible.

During a cardiac arrest she defibrillates him, only to find herself hurled back a century to fogbound London, where she discovers they are both members of the Pentacle, a group of vampire-hunters.

Now begins a race to prevent the vampire lord they had once dispatched, from being resurrected. Yet deprived of each other’s body for over a century, their rekindled passion could blind them to their danger. 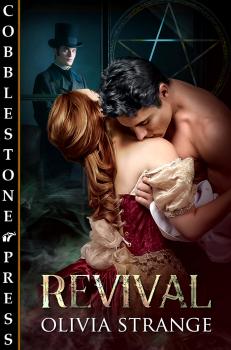 More From The Pentacle

Dense fog swirled against the windows of the hospital, but its Accident and Emergency department was full, as it always was on a Friday night. Inebriated patients and irate relatives and friends cajoled the staff to have their casualties seen as soon as possible.

“We’ll get to you all as soon as we can,” called out the senior charge nurse as the situation around the reception area rapidly became intolerable. “We have several road casualties and some real emergency cases to see to first.”

His speech was greeted by moans and expostulations of irritation sufficient for the two heavy security men to step forward and calm the situation.

Doctor Vanessa Franklin had been on call as the Accident and Emergency consultant for forty-eight hours straight and felt every one of them. Her eyes were beginning to prickle and her body cried out for sleep, but there was no way she could assuage her tiredness. The patient on the operating table was losing blood from the stab wound in his neck, despite the pad that the casualty sister compressed the wound with.

“All right, what have we got?” she asked Doctor Roberts, pulling on her latex gloves over the sleeves of her green operating gown. She watched her young registrar gather himself together, blinking repeatedly at her query. He’ll have to get that nervous tic under control or he’ll never get a consultancy, she thought. She was aware she made him nervous, especially when she caught him gazing up at her with that puppy-dog expression of his. The truth was he irritated her, because at twenty-nine he was only a few years younger than her, but despite having decent medical and surgical skills he somehow lacked the self-confidence needed to make it to the top of the profession.

Tim swallowed hard and focused on the case notes he’d made. “This is Stephen Fowler, a nineteen-year-old male who sustained a stab wound to the neck in a fight after being ejected from a night-club by the bouncers for drunken behavior. He picked a fight with another young guy, who stabbed him and is now in police custody. Stephen passed out and was still unconscious when the paramedics reached him. Someone tried to sit him up—”

“They did what?” Vanessa snapped, rolling her eyes.

“Started convulsing,” she intercepted. “Of course he did. Pumping blood from a neck wound and then being sat up when he should have been laid down in the recovery position; he would have developed lack of oxygen to his brain and a fit would be inevitable.”

“The paramedics stabilized him and applied compression to the neck wound. They didn’t think it was a carotid artery injury, rather a jugular vein. His hemoglobin is only 10.5 grams per deciliter though.”

Vanessa nodded. “So he must have lost at least a pint of blood. Okay, so let’s have a look and while I repair the blood vessel you’d better cross-match him for a couple of units of blood ready to go up to the acute surgical ward with him.”

Flexing her fingers and accepting the pair of artery forceps being offered to her, she nodded to the sister to release the pad. Immediately, blood spurted out of the young man’s neck and Vanessa went to work.

Made Men 7: Love on the Brain (MFMM)
Dixie Lynn Dwyer
In Shelf
$4.99
Tweets by
sirenbookstrand