On Hilo, hard case, deadly, off-world criminals are preying on the elderly. After his best friend’s niece is killed, Galactic P.I. Majestic Kane is asked to find the killers, help the old folks stand up to the threat, and put a stop this criminal activity once and for all. But to get it done, Kane finds he must get mean, mad dog mean. 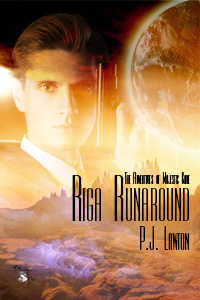 It took a couple of seconds for Kane to recognize the second man for what he was; a 2G android. He’d never seen a droid with facial hair, or for that matter, any hair at all. I guess it’s an improvement since the days of the first generation silver metallic droids. Well, they could change their looks but they couldn’t change the blank stare of the eyes. Actually, droids do not have eyes, just sensory units. This always gave them away, whatever clothes they wore, and however they tried to disguise themselves.

Kane quickly dismissed the android. His eyes locked with those of the beardless man for a few seconds as they sized up one another. The man turned to the android and resumed his conversation. This meant either he was showing Kane respect, or he’d simply figured Kane was no threat. It really didn’t matter much to Kane, either way, so he ordered a syn-beer. When the bartender brought his bottle, he didn’t ask if Kane wanted a glass. Kane asked for Big Al. The huge bartender quietly looked at Kane for a second, and then moved back down to the end of the bar and started washing glasses.

With a shrug Kane lifted the bottle to his lips, but before he could even take a sip, he was roughly jostled behind. The smell of unwashed bodies nauseated him, and he turned to find the three air pool players glowering at him. Their spokesman was the ugliest of the three, with no teeth and a scruffy beard. He sneered. “Hey man, we don’t like your kind in here.”

“Well,” Kane said, “Since I don’t like stinking, unwashed, halitosis-ridden bozos, I guess it makes us even.”

It took Rotten Teeth a good couple of seconds to realize he was being insulted; words with four syllables words obviously threw him. Suddenly the light bulb in his pea brain came on, but it was already too late. Kane simply continued their dialog with a straight right jab, flush on the end of the guy’s big red nose. Kane knew he’d broken the man’s nose, because he felt and heard the cartilage snap. When he was light-heavyweight champ of the Enforcement Athletic League he’d perfected his right jab, and it was still his deadliest punch. The man fell backward against a nearby table, eyes watering and blood streaming. One down, two to go.

Without a pause, using his left hand, Kane grabbed the beer bottle and swung it to the left. It caught the second of the wannabe tough guys just above his left ear. The bottle shattered as the guy shuddered and collapsed. Two down, one to go.

The third man tried the age-old trick of grabbing Kane around the throat from behind. Kane quickly shoved an elbow into the attacker’s solar plexus. The thug sagged to his knees, choking and gulping for air. Kane gave him a right cross in the temple that almost broke his wrist. Talk about hard-headed. Just as he got ready for a knife-hand strike below his nose for good measure, he heard the familiar sound of a slide ejector of a sonic disruptor. From right behind came a rasping voice.

“That’s enough. Touch him once more and I’ll blow out your spine.”