Katie McGowan is bi-polar, and she’s run the gamut of medications, but nothing works anymore. Everyone says her she should have a microchip implanted in her brain that can regulate her mood swings. But Katie doesn’t want to be a robot. In a tough love move, her husband, Scott takes her to the Moon—and dumps her. Katie’s stuck on that God-forsaken “rock” and thinks she’s space sick. But she’s wrong; she’s pregnant. Now the surgery’s too dangerous and she has to go off her meds until the baby’s born.

Scott’s elated that he’s going to be a father and assumes Katie will take him back. He has no clue how badly he’s hurt her, how thoroughly he’s broken her trust—or that he may not get her back at all. 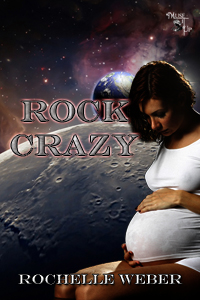 They were on Earth, at a bar near Champaign, Illinois, part of the Chicago metropolis, which had sprawled across the Midwest and even down to Cairo, Illinois, where it merged with the equally sprawling Greater Memphis Area. They were there to sing karaoke, and Katie McGowan was ‘sober,’ as usual. She was on too many medications to mess with alcohol.

“You can’t do this,” it said. “This is inappropriate behavior.”

Katie tried to stop herself, but she couldn’t. Her arm rose, as if of its own accord, and poured the pop on the woman’s bleach-blonde, over-processed head. The woman came off the stool and shoved Katie. She flew across the room, seemingly in slow motion. Of course she threw her right arm out to break the fall, and she still hit her head on the floor. But the pain in her wrist was worse than the headache.

“I told you not to do it,” The Voice said. “Now, at least stay down. Don’t try to fight her. You’ve already lost.”

Katie lay there gasping for breath, smelling the old, stale, spilled booze and beer that had seeped into the floor. Someone helped her up. It was Scott, her husband, and she was wrapped in his arms while holding her wrist. The woman wanted to come after her again, but people restrained her.

“Get her out of here!” the manager demanded.

Scott half-carried her outside. She was hysterical and still screaming. The other woman followed them out to the car.

“What’s wrong with you? Are you crazy?”

Katie couldn’t answer. All she could do was scream. Just scream. No words, just that high-pitched wail that was a good octave above any note she ever managed to reach when she sang.

“Now why can’t you reach this pitch when you sing?” The Voice asked. “Stop it or you won’t be able to sing at all. Ever again.”

She threw herself across the hood of the sky-car, feeling its warmth. She kept screaming, and the pain flared in her wrist again. Her throat was sore, and her voice was going…gone. The screaming subsided, and she began sobbing, hoarsely. Darn it. Her physical voice really was gone! The Voice was merging into the background, but now her mother was there. Linda Snodgrass had been dead for over five years, but she still appeared and yelled at Katie.

“You stupid girl! I told you ladies don’t fight. What did you think you were doing?”

“Quit whining, or I’ll give you something to be sorry for.”

Her mother faded away, and she started hearing what was going on around her again.

Scott was there, and the manager, and the woman who had shoved her, and several bystanders, but all she could do was cry and say, “I’m sorry,” over and over.

“Who’s she talking to?” the woman asked. “She really is crazy!”

“Get her out of here!” the manager yelled.

“I’m so sorrrrrreeeeeee,” Katie wailed hoarsely. Someone stayed with her while Scott went back inside to get her sweater and his keys. She was powerless to stop this stage, as well. The sobbing and apologizing would go on for another hour or so. It was part of the pattern. She would apologize to everyone she met. And she would cry until she dehydrated herself and ran out of tears.

Scott came out of the bar and handed her sweater to her. She reached for it with her right hand and dropped it. He picked it up and put it across her shoulders. Then he unlocked the sky-car and helped her into it.

“Your wrist’s swelling up fast, baby. I brought you some ice from inside.” He handed her a bag of ice wrapped in a bar towel. “Your eyes look more red than green right now, and you’re so pale your freckles really stand out on your nose.”

He was oddly supportive this time. “I know you’re taking your meds. I’ve been giving them to you myself. And you still went off.”

“W-why?” Katie sobbed. “W-why? I’m s-sorry. I’m s-so s-sorrrrreeeee!”
“I don’t know. I don’t think the meds’re working,” he said. He reached over to pat her hand, but she was holding her right wrist, trying to cushion it and keep the bag of ice steady.