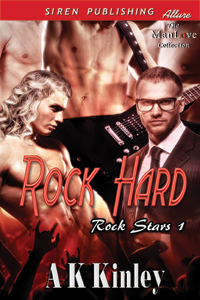 Heat Rating: Sextreme
Word Count: 61,588
8 Ratings (3.5)
Contemporary Multiple Partners Alternative (M/M, Gay)
In Bookshelf
In Cart
In Wish List
Available formats
PDF
HTML
ePub
Mobi
Cover Art by Harris Channing
Reviews
REVIEW: The story of a rock band Rock Hard, they are band mate and husbands. The past year they have been slowing falling apart due to Deuce substance abuse. They finally come through that love is the stronger feeling to survive as a family. To help Deuce enters Zane and he commits to Adam and Deuce as husbands. It is a great start to a great story. Can't wait to wait use in the next book. Hope to find out what happens with Jamie


OVERALL IMPRESSION OF THE BOOK: This is a must read book

virginia lee
The dynamics and scenes in this book were amazing. By the end of the book you feel like you know these men and want to see them happy. I laughed, I cried, I rooted for them. A hot hot hot book that also has a story line you want to keep up with!
Siannaj
Read more...
Professional Reviews

4.5 RED STARS:“I know I have said this before, but I really do love when a book and author take me well out of my comfort zone and make me enjoy it! I really haven’t had much experience reading menage romance, and especially not m/m/m/m, but I really liked this book! It was hot, it was gritty, but most of all it was heartfelt and passionate! I would strongly suggest you read this one, you won’t be sorry, and you will more than likely find yourself with a whole new comfort zone just like I did!” ~ Bec, Bike Book Reviews 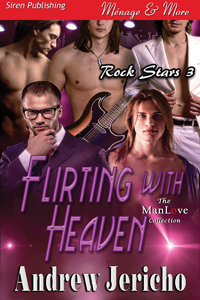 “OK, what is it?” Adam asked, approaching Deuce in the hallway outside his bedroom. “It’s after midnight! You’re going to wake Jamie, plus L.T., if you haven’t already!”

“I’m just trying to have a good time, too!” Deuce responded sarcastically as he blared one of his signature riffs.

“You’re drunk again. I can smell it! I can’t talk to you like this!” Adam said, turning to walk away. “Go to bed and sleep it off!”

“Fuck, I obviously can’t sleep it off in our bed! Or maybe it’s just become your bed now? Well, all except for that fucking little bitch who’s sharing it tonight! Then you have the balls to send me off to the guest bedroom whenever you want to fuck him!”

“I see you’ve been drinking whiskey, too!” Adam said, crossing his arms across his bare chest, glancing briefly at the half-empty fifth on the hall table. “It makes you loud, and mean!”

“No, Adam! I’m loud and mean because of the little bitch in our bed!” Deuce responded with a heavy slur in his speech. “I can guarantee you wouldn’t like my definition of bitch! Maybe whore would be more appropriate!”

“Deuce, you’ll always be my first love. Why are you so blind that you can’t see that?”

“Shhh, better not say it too loudly! We wouldn’t want the little bitch or the bastard to hear?”

“They already know my feelings for you, Deuce! I don’t keep secrets!”

“Yeah, the bastard already knows Deuce!” A third voice spoke from a door a few bedrooms down. “Go to bed, you’ve said enough for tonight!”

“Not when you’re disturbing everyone else,” L.T. replied. “Besides, you’re hurting Adam with your behavior.”

As the tall, dark-haired drummer moved closer to Deuce, Adam noticed that he was immediately taking charge of the situation. While his anger flared for Deuce, his love continued to flourish for L.T. Jamison. It always struck Adam as odd that the two men could be very similar in appearance, but so different in personality.

Deuce and L.T. were almost the same height, six-foot-three. They stood at least three or four inches taller than himself and Jamie. Dark-brown hair and dark eyes were probably their best features. The only real difference in appearance between the pair was that Deuce’s hair flowed straight to the middle of his back, while L.T.’s curly locks stopped at his shoulders.

As for their personalities, Deuce was dominate, high-strung, jealous, and had been fighting his addiction to alcohol for almost a year. It had been a rough journey not just for Deuce, but for them all. His drunken episodes had resulted in hateful, bitter words, and had been the cause of the band being asked to leave their hotel room during a performance in Chicago last week. L.T., or dom, his partner’s public name and private title for when they were alone swirled through his mind, as he compared his personality to the drunken stupor of a man in front of him.

The remainder of L.T.’s personality was something that Adam had sought solace in more frequently in the last year, as Deuce grew further away. While Jamie opened up to him, Adam found himself confiding to L.T. in much the same way. In the tender moments after lovemaking, L.T. would hold him quietly as he talked about what he felt was a failing and worn-out marriage with Deuce.

“I don’t take orders from you, or Adam!” Deuce yelled, pulling Adam from his thoughts. “As a matter of fact, I was thinking about going to bed in my room! That way I could fuck the hell out your little gay boy, Adam! Little bitch likes it rough!”

“I know you can handle it, Adam, but you shouldn’t have to. He’s hurt you enough in the past year.”

“Sharing our relationship problems with him, Adam? Is it not enough that you fuck him, too?” Deuce replied sarcastically.

“Deuce, your attitude is affecting all of us! Remember, we’re a family! Sometimes I don’t think you comprehend that! After you sleep it off we’re going to have a private discussion, and then we’re going to talk to Jamie and L.T.”

Adam pushed the knee-length gown up around Jamie’s waist, as he teased his partner’s hole, moistening the entry with lube.

“I don’t fuck you. We make love, surrounded by our commitment, in the warmth of my bed. I think we’re always bonding, regardless of where our bodies are.”

“That’s why I’m the front man. I have a natural ability to woo people with my voice and my words. It seems to work pretty well on your fine ass, too.”

“What, little bitch? Is this what you wanted?” Adam murmured, gently slipping two fingers simultaneously into his partner’s ass. “Another part of our lovemaking routine is making sure that you’re completely aroused and ready to be penetrated. Holy shit, you’re still so tight!”

With Jamie cuddled close, it was easy for Adam to slip his arm under his partner’s knees, bending his legs back, “Now you’re in the right position.”

“For what?” Jamie asked innocently rubbing a finger across his bottom lip.

Feeling the warmth and tightness of Jamie’s ass opening around his fingers, sent a rush of desire through Adam’s veins. As his lover’s cavity expanded, the smoothness of the internal flesh was going to feel damn good around his dick. It was as if every drop of his own blood was pumping toward his cock, filling his hard erection. Adam’s swollen rod was only half of the evidence of his love for his partner, the other was Jamie’s pleasure. Much of Adam’s orgasm would result from his dominate lead. Just hearing his lover’s sexually submissive words was sometimes all it took to deposit a load of cum into Jamie’s ass.

“I’ll do whatever you want, Adam. I always do.”

“Why did I know those sweet words were next?” Adam asked as he continued to swirl his fingers inside Jamie’s body trying to loosen the tight cavity. “I’m always so afraid that I’m going to hurt you. That’s why I make sure my little bitch gets his extra attention.”

“What? I know I’m not hurting you. There’s too much slick for that. Besides, I think your feelings for me are taking over now. I know what I feel, baby. I love you.”

Nodding Jamie replied, “Fill me with your love, like my heart has filled you.”

Adam covered Jamie’s body with his own, wrapping his partner’s legs around his waist, “In my book, this is the most romantic and submissive position that I could ever get you in. Don’t forget to breathe, baby. Relax.”

“Put it in!” Jamie whined, thrusting his hips against Adam’s body.

“I thought I’d make you beg a little. Maybe I’ll let the sexual tension build between us. It’s always so fucking hot watching you become aroused.”

“Dammit, Adam! Put your hard dick inside me, now!” Jamie said slightly above a whisper hissed into Adam’s ear.

“In a minute, impatient little bitch,” Adam whispered back still rubbing Jamie’s shaft, feeling his partner’s pre-cum coating his hand. “We’ve got all night, it’s barely ten. In a few days we will have reached a milestone. Five years is very special to me.”

Jamie continued to grow restless beneath him, as Adam stopped teasing. He pulled his partner close, removing a gold band with five diamonds from a finger on his other hand.

“To give you this. Now open your eyes. I brought it to bed with us because this is where we really connect. In my bed is where I first got you to open up to me, remember?”

Adam watched Jamie’s expression as he laid the band in the palm of his lover’s hand.

“It’s beautiful, but I didn’t need this as proof of your love,” Jamie replied, smiling. “I’m already your partner.”

“Partners? We’re deeper than that, and you know it. I still remember that afternoon when Deuce and I were holding auditions. First you, and then L.T., walked into our lives.”

“I love all of you, but there is just something—”

“Special between us,” Adam interrupted. “I can’t explain it either.” 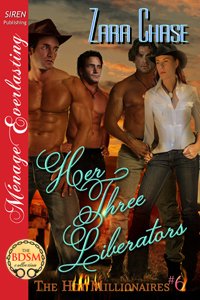