A lifelong sanctuary of home bliss suddenly comes to a halt when Alexandra Stone discovers her parents lied and kept secrets about their family heritage. The discovery comes after a silly chant transports Alex and her best friend Sarah, along with her two pets, to the outskirts of Rock Kingdom.

Now faced with the dangerous elements of Dread’s Forest, Alex is determined to fight the man responsible for their predicament – her uncle.

But is he responsible?

She will risk her safety and trust her instincts when thrust alongside him to battle the Braks, skeletal creatures that project thorn-infested slime encasing their victim before plunging them deep within the caverns of the earth.

Readers will discover that ‘‘things are not always as they appear to be’. 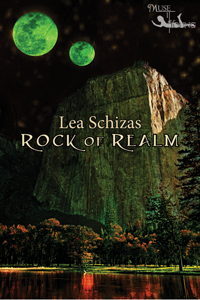 As a teacher I'm exposed to some of the finest fiction available for todays youth and Rock of Realm is way at the top of my list. This incredible fantasy adventure teaches us about friendship, loyalty, courage, wisdom, and that not everything is as it seems. - Amazon reader 5 star review

Rock of Realm is a delightful, fast paced tale you want to, really, really want to be naughty and read ahead, but because it's so good, you don't. You read on, eager for every juicy moment, catch-phrase and antic of Alex's journey. -Five Gold Stars Lins Own Horn Tooting

Lea Schizas has created a delightful, fast moving tale that will enchant young and not so young. I highly recommend this book...Amazon Review 5 Stars

Thesan bid them a peaceful sleep as Larok walked them up the marble staircase, guiding them to their rooms when Alex stopped abruptly. “I want my friends with me, in the same room,” she demanded, her request a measure of desperation not to be separated from her companions.

Larok did not oppose. His features and nod acknowledged an understanding of her apprehension.

Motioning to their room, Larok reassured them the Braks couldn’t gain access to the Marble Chamber; he then closed the door behind him.

The chamber was somber, nothing compared to the cheerful, poster-decorated room of a teenaged girl. There were two twin-sized beds, one for each girl. The air was clean unlike the musky, dank smell of earth in the tunnels. The animals snuggled comfortably on the floor.

Alex settled under the warm furry blanket, falling into a deep sleep almost immediately. Images of large, sinister waves capsizing a boat with her in it filled her dream. Skies darkened. A magnificent yellow Blooper-like fish, the size of a yacht, smiled at her with every wave that came crashing down. Two Oracles by the foot of Rock Kingdom warned her to turn back.

“Approach, and he will die,” the Oracles said.

“Alex! Alex, wake up.” She opened her eyes and stared into Sarah’s worried gape; then swept her gaze across everyone’s worried faces. “You okay?” Sarah asked.

Hearing the screams, Larok burst through the door, frightening them all.

“I’m…I’m sorry. I was dreaming.” Alex wiped the daze out of her eyes, continuing to stare into their befuddled gazes.

“About what, princess?” Larok asked. He stood by the bed clenching his cloak; his face intense, his eyes not daring to blink as though afraid he would miss her answer.

“These huge waves coming down on me, and… and this fish, and statues coming up from the waters…”

Alex stared at Larok for the longest time before she slowly nodded her head. “They said if I approach, he would die. Who’s going to die, Larok? Which of my friends will die?”