Roll In The Hay

It’s Chad’s busy time of the year at the High Mountain Feed Store. But when he turns out to be the only able-bodied member of his staff, he finds himself making a large hay delivery to a new client. What he doesn’t realize is the client is a shifter like himself. He’s about to have the time of his life and find more than he bargained for. 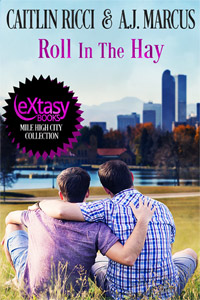 Roll In The Hay

Chad Hargrove stretched behind the counter of the High Mountain Feed Store. It had been a long day and he was ready for it to be over. It was the busy time of the year, and it seemed like everyone who owned a horse in Teller and Park counties was coming through to see what the newest crop of hay looked like and place their orders.

The chime on the door rang, and he turned to look around the shelves full of vet supplies toward the front. A big man stood there. His hair was dark brown, almost black, and it fell down to his broad shoulders. A tight green t-shirt clung to his chest but hung loose at his narrow waist.

He was new to the store—there was no way Chad would’ve forgotten this unknown stud. “Can I help you?”

The big man turned in Chad’s direction. “Hey. I was told you guys have some of the best hay around.”

“I like to think we do.” Chad didn’t bother adding he’d grazed through a few bales once in a while. As a bull shifter, he wasn’t opposed to a bit of grass and alfalfa from time to time.

“Do you deliver?” The man walked over to the counter.

“Sure. Might be a day or two, depending on how much you need.” Chad pulled up the scheduler on the computer.

“Let me take a look at what you’ve got, but right now I think a thousand standard bales will feed my herd for most of six months.”

“Six months. You know the price might go up before then.” Chad knew how the market could fluctuate. They’d just received the first cutting, and if something happened to stop a second cutting, the price could go through the roof.

“Then let’s go take a look at it.” Chad locked the computer, thus locking the cash drawer. “It’s back here. I can hear the bell if anyone else comes in.” It was late enough in the day he hoped the store was about done.

“I’ll let you know if I hear anyone pull up,” the man said.

There was something about the way he said it that made Chad wonder if he was a shifter of some kind, but he wasn’t a predator. He didn’t have the right feel for that. Chad sniffed as casually as possible. All he could smell was cows, horses, hay, grain, manure, and sweat. Nothing out of the ordinary for a rancher.

Chad opened the door that led outside and toward the two barns where he stored the hay. The far building still had the dregs of last year’s crop, and he doubted the man wanted any of that, so he walked into the nearer barn, half full of the fresh stuff. The fragrant alfalfa and grass mix filled his nose. Chad took a deep breath, savoring the aroma.

Beside him, the big man did too. A broad smile crossed his rugged features. “Smells great. But what’s it look like?”

“We had a bale bust this morning while loading a truck, take a look at it.” Chad walked over to where a broken bale lay on the concrete floor. The fresh green of the alfalfa along with a few small purple flowers shone between the lighter green strands of the grass.

The man bent down and ran a hand over the open front of the bale. He lifted his hand up to his nose and inhaled. “Delicious.” He stood and brushed his hand on his tight, faded jeans. There was a thick bulge at his crotch that hadn’t been there a few minutes earlier. “Can you fill an order for two thousand bales?”

“We’re getting another delivery from this field tomorrow. Six thousand bales. I can put you down for two thousand.” Chad might be tired from all the work that was hitting him, but he liked the money that was coming in. The way it was going, he might be able to expand his storage buildings to hold even more hay during the winter and help keep the prices down, which his customers would appreciate.

“When can you deliver?”

“Let’s go back in and check the schedule.” Chad gestured toward the store building.

“So you’ve been working hard, I bet,” the man said as they walked back.

“It’s that time of year.” Chad crossed the parking lot.

“Having a good business can be hard some years.”

“It can, but I’ve got a fairly steady customer base.” Chad held the door open for him.

“If this works out, you can add me to that base.” 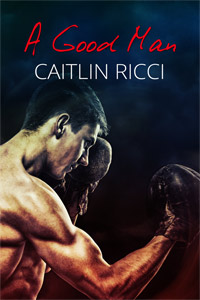 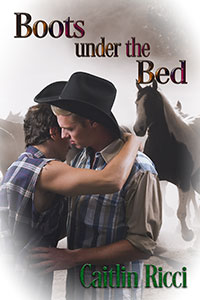