Joe Barnes is infatuated with fellow college freshman Ron Driscoll. Ron is in the ROTC program and Joe starts to dress in military clothing to emulate his idol. But apart from discussions in philosophy class, Joe is too shy to speak to Ron, and Ron doesn’t break away from his circle of admirers long enough to notice that Joe is alive.

Joe all but throws himself at Ron during a discussion of Kant’s views on beauty. But Ron remains unaware of Joe’s feelings.

One Friday after class Joe visits the bathroom and finds himself blindfolded and put in handcuffs. Having a secret kink for bondage Joe is by turns scared and aroused.

Ron has planned a romantic and kinky weekend with Joe in the Allegheny mountains where soft rope will be needed, but clothes will not.

Gathering his books, Joe put them in his backpack and left the classroom, his mind still amazed at how he’d managed to daydream through an entire session. He’d have to see if he could get the notes from someone, but that would mean asking, initiating a conversation. Joe quailed at the thought.

As was his usual custom, Joe paid a visit to the bathroom at the end of the hallway. He was nothing if not consistent in his behavior, a fact that he would soon learn someone else had bargained upon.

Closing his eyes as his stream began, Joe felt someone take his hands and pull them behind his back. “What the ...!”

Joe felt cold metal surround his wrists and heard the snap of a lock being closed. This was immediately followed by a hand clamping itself over his mouth, muffling his further protests. Joe began to struggle, but the man’s other hand had a firm grip on him.

“Quiet,” a breathy voice said in his ear. “You won’t come to any harm if you do exactly what I tell you.”

Joe began to turn to see who was ambushing him.

“No, eyes front and center.”

“Hum, um.” Joe mumbled unintelligibly into the man’s palm, and recommenced his struggles.

But all his senses told Joe to fight, to run away.

Somehow the words penetrated Joe’s feverishly racing brain, and much to his surprise he began to relax. The rest of his stream flowed into the urinal.

“Great, man. I’m gonna take my hand from your mouth now. Will you promise not to yell? I promise you won’t be harmed.”

Joe considered the question. There was a certain element of kinky enjoyment mixed in with his fear. He slowly nodded his assent and the hand was removed.

“What’s going on? Who are you?” Despite everything Joe remembered to talk quietly.

“It’s okay, little one. I know you have questions. All will be revealed soon. All I ask is that you trust me a bit longer. Can you do that?” The voice sounded odd, as if its owner was trying to disguise it by talking gruffly.

“Uh, yeah.” This was seven kinds of weird, but oddly Joe didn’t feel scared. He was miffed the guy called him little one though. Joe may have only been five feet even, but that didn’t give him the right to ...

“Thank you, little one.”

Joe ground his teeth. Where did this dude get off calling him that? He was about to say something when the guy’s next words froze the comment in his throat.

“I’m going to put a blindfold on you.”

Joe tried to turn around, but the hand went back to his mouth and held him still. An arm wrapped around him to prevent the rest of his body from moving.

“Joe, don’t fight me. I repeat what I said earlier. If you cooperate, you won’t be harmed.”

Joe’s struggles slowly began to lessen, and the man loosened his hold.

“You’re being very brave, and trust me, this will be rewarded.”

A strip of cloth fell over Joe’s eyes and was tightened at the back of his head.

“Doing great, bud. Really great.” The voice never lost any of its calm reassurance or its gruff disguise.

Joe’s mind, now it had had time to process things a little, began to wonder as to the identity of his attacker. The guy was certainly strong, but from what he could tell, wasn’t much taller than he was.

Joe felt a warm, dry, gentle hand take hold of his dick. The hand stroked it a few times, then after a couple of quick shakes, Joe felt his equipment being put away. Once his fly was buttoned up, he felt a tender pat on his bulge. All of this diverted Joe’s mind from its previous task of trying to identify his assailant.

“Now the adventure truly begins. I’m gonna lead you out of here and to the parking lot. Then we’re gonna go on a long ride to somewhere real special. Somewhere where we can spend the weekend together.”

“I don’t want you to worry about a thing. It’s all been taken care of. I’ve called the restaurant and told them you’ll be, uh, tied up all weekend,” the guy laughed softly at his joke.

Joe shivered; he’d long held secret bondage fantasies, of being bound with rope. Could, would this guy do that to him?

“I’ve been keeping an eye on you, watching you real close. Oh, almost forgot.” Joe heard a zipper then rustling. He felt something being draped over his shoulders. “It’s to cover the handcuffs, we don’t want to draw too much attention to ourselves.”

Joe nodded uncertainly. And walking around with a strip of cloth over my eyes and being guided like a blind person wouldn’t draw people’s attention?

“Now we’re ready,” the voice said close to Joe’s ear. “Don’t make a fuss, and I promise you’ll have the most wonderful weekend you could ever imagine. Draw attention to us, and I’ll just release you and it’ll be over before it’s really begun. Capiche?”

The rest of Joe’s words were cut off by a pair of lips closing over his. A hand cupped the back of his head and pulled him in closer, increasing the pressure of the kiss. After a moment the hand and the lips were removed, leaving Joe reeling and breathless.

“That’s just a taste of what’s ahead for you if you’re willing to cooperate.”

“I ... Uh.” Joe couldn’t remember the last time he’d been kissed so completely, so passionately, so ...

“You want this weekend to happen?”

“Uh,” Talk about being in the Twilight Zone. “You promise not to hurt me, or --”

Joe felt the guy wrap an arm around his shoulders in jock casual fashion. 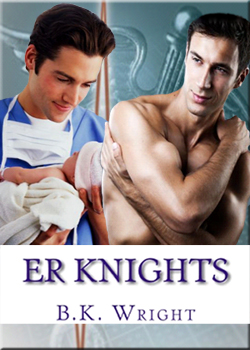 The Dark Side of Love (MM)
Lynn Hagen
In Shelf
$2.99
Tweets by
sirenbookstrand