Jason Mann needs a vacation, badly. A psychologist, he feels like he works all the time and plays very little. Honestly, he just wants to go away with his ruggedly handsome boyfriend, policeman Dillon Snyder. He doesn’t care where, but hopefully soon.

A vacation isn’t easy to plan in their lives, though. Jason has his string of patients he helps, and Dillon cleans up the streets as an officer of the law. Plus, their friend Gillian pulls them in different directions, always demanding. Something has to give, and quickly. Before Jason loses his mind over his job and friend, he desperately needs to get away.

When Dillon has an opportunity to fly south for a vacation in Florida for eleven days, Jason’s on board. But with every treat in life comes a price. Will this adventure and a colony of nudists rip the two men apart, or will their days of fun in the sun only bring them closer together? 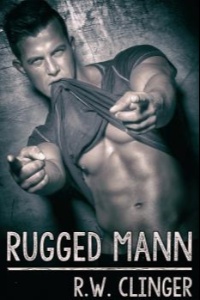 Jason waits a minute before he follows the kid out of the office. He decides to check his text messages on his phone. Zero. Gillian’s life isn’t falling apart ... yet. Good for her. He’s glad she has it together at the moment.

He snags his coat off a hook, slips into it. Before he realizes, he stands on Third Street and feels snow kiss his eyelids, cheeks, and forehead. Crosses the street and enters the coffee shop.

High tables with no chairs line the walls of the coffee house. The faux wooden floor looks like cherry. The Brew’s busy, Jason notes. Always busy. He’s never seen it empty of patrons. A million-dollar making establishment, no doubt. Young businesspeople huddle together and discuss their jobs, politics, movies, books, religion, lovers, liars, vacation spots, trendy drinks, pets, and families. They share tales of lust, deceit, courage, murder, and goals. He hears conversations about catty girlfriends, cheating husbands, boyfriends with big dicks, priests who lie, wives who like their dildos more than their husbands’ dicks, and mothers who won’t stop nagging at their adult children. As the public’s chatter continues, Jason visually notes that everyone looks down at their phones, even when talking. Old and young. Cyber activity has taken over their lives, tuning their brains into mush. Facebook, Tumblr, Etsy, Instagram, Snapchat ... they all control the world now.

He orders two regular coffees. Nothing fancy from Madagascar. Nothing too sweet. Nothing with cinnamon or hazelnut. Plain coffee is the best coffee in his opinion.

The second coffee is for Dillon. They meet here almost every day at this time. Since the police station is only two blocks to the east, Dillon’s a sweetheart and makes an effort to see Jason during their workdays, when possible, of course. Today just happens to be one of these days. Seeing and visiting Dillon will put some energy into Jason’s life, a smile on his face, and get Jason through lunch. Dillon’s like an upper of sorts in man form for him. A buzz. A lift. Just what he needs to get by.

Wendy waits on him: a nice girl in college, blond, pigtails, bright-wide eyes, Suicide Squad looks, always smiling. She’s famished for attention, always intrusive, outrageous, shocking and needing to be the center of attention. She says to Jason while he pays with plastic, “You’re rock-hard, superhero of a cop-husband is sneaking up behind you. Better watch your bottom. He looks hungry for some homo-sex.”

Does Jason blush? Maybe. A little. “He’s my boyfriend. We’re not married.”

Wendy declares, “That’s too bad. You should be married to him. The cop is gorgeous. Someone you can ride every night. Everyone drools over him. Wagging tongues all the way. Chiseled pig of the century. Everyone here at this coffee shithole wants to eat him up, even the straight cocks who fill the orders.”

“Thanks for the information, Wendy. An interesting pleasure, as usual.” Jason spins around with the coffee and here Dillon is (rock-hard, superhero, chiseled pig), his rakishly handsome man, boyfriend, lover ... someone of importance in his life.

The man of his dreams glows with a big grin: dimples, unshaven today, sexy as always. Handgun clipped at his right side. Silver shield glimmering on his navy blue uniform. Hair mixed with some product and sporting the perfect wave. Porn-stuff for all the right reasons, Jason thinks. No wonder everyone drools and becomes open-mouthed over him.

Dillon kisses him: nothing over-the-top and alerting because they are in public. Something simple and sweet, semi-discreet among the crowd. More like a peck than a kiss. No dicks grinding. No chests gliding together. No man-palms on bottoms. He asks Jason, “How’s your day going so far, babe?”

“The normal. Two patients in a fucked up world of weirdness and a dictator as president. How’s it going for you?”

“One domestic violence call first thing this morning. We arrested the boyfriend. He beat the hell out of his girlfriend. Two black eyes. A broken wrist. It was horrible. I hate shit like that any time of the day.”

They walk towards the coffee shop’s exit, lightly tap fists together like superheroes with extraordinary powers. Dillon says, “Saving the world minute by minute and day by day, aren’t we?” 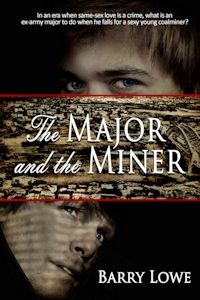 The Major and the Miner MM
Barry Lowe
In Shelf
$5.99
Tweets by
sirenbookstrand