In the Yucatan Peninsula of Mexico, anthropology grad student Kate Ferguson and Paul Rodriguez are on their honeymoon. Dark secrets lurk around Paul, locked in the shaman stone he wears. They beckon especially to Kate who reads psychic impressions left in objects. Paul’s search for answers leads them and Dr. Juan Vasquez from the Museo National de Antropologia in Mexico City into the jungles of Mexico, the heights of Machu Picchu, and the art world of Lima and beyond.

When Paul launches out on his own, leaving Kate in Juan’s care, the anthropologists follow, hoping to reach Paul before old enemies from his past with murder on their minds find and kill him.

But the journey reveals disturbing answers and hidden secrets about Paul and Juan and a dark legacy for Paul’s heir. Kate is the key to the answers but finds herself very unsure where to place her trust. 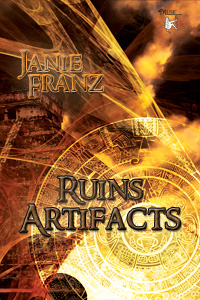 Kate wasn’t sure what awakened her. Had it been the clatter of a lizard across the wood floor of the inn? Or had it been a snatch of disturbing dream that only vanished upon awakening? She stirred under the thin sheet covering her sweating body. As she rolled onto her back, the yards of mosquito netting swathed over the bedposts filled her vision in the dim light. Thin, gauzy, and delicate—how like bridal veiling it looked! But it was deceptive—not only did it protect her from flying pests, but it trapped air so well, breathing became a chore. Kate began to wonder if the netting, like a giant web, had not trapped her, too, to be offered up as sacrifice to a primal god like those just outside the window.

She shivered even in the muggy heat and squeezed her eyes shut, trying to keep memory from breaking into reality. But images leaked out—images of a blood-drenched stone, a bird figure, and an obsidian knife.

Kate reached across the pillows for Paul, needing to feel his healing presence. Her hand found only heavily starched muslin, coarse under her fingertips. Rising on her elbow, she continued to feel beside her. Empty. She was alone again. Where was he now?

A slit of moonlight stabbed the darkness across the bare floor. Her eyes followed it toward the balcony door, which was slightly ajar. Was Paul meditating outside? At least he could breathe there. She envied him that.

Rising, she slipped on the white silk robe Paul had bought her for a wedding present. It was part of a delicate short peignoir set, trimmed in white lace. She smiled remembering how he persuaded one of the customs officials at the airport to keep her talking about the Chichen Itza ruins while a colleague carefully unwrapped and rewrapped the wedding present hidden in his luggage. He had orchestrated it as smoothly as this impromptu honeymoon.

Tying the satin robe cord about her waist, she walked out onto the terrace. Paul was indeed there, though not in meditation. Sometimes, he concentrated so completely Kate couldn’t rouse him. Yet, when he emerged from that state, he was centered, empowered, able to concentrate fully on her. She had only seen a ghost of that ability a few weeks before. As it reached full strength when he finally integrated his dual heritage, she often found it overwhelming; sometimes in a most delicious way and sometimes slightly frightening.

Kate smiled at Paul’s back as he leaned over the balcony railing. Though a fit man with a well-formed body, he never seemed at ease with his bare skin. Even here in the steamy Yucatan jungle, he still wore a shirt with his jeans. The ends of the tan bush shirt lifted behind him in the night breeze, revealing he had merely stuck his arms through the sleeves. The garment was like a necessary reminder of civilization as if he would lose himself to his more primitive heritage without it.

Paul had only recently reconciled the two different parts of himself. One was the refined European-educated architect of Spanish lineage. The other held the ancient role of shaman to a people far older than those who had built the ruins he now stood before. Both parts had finally found peace within him in modern Phoenix, Arizona.

He turned; his smile was slow and guarded. “Couldn’t sleep,” he said. “Jet lag, I guess.”

Kate studied him closely, frowning. His dark eyes were brooding again above his hawk nose. His late-thirties face was framed by black hair, bearing premature grey at his temples. She hadn’t seen him like this since he chose to accept his full heritage and the incumbent role as shaman. She had seen him relaxed but controlled around her the first weeks she shared his house after the ceremony binding them, strangers really, as a married couple and created her role as his people’s Spirit Woman. While she occupied his guest room, Paul carefully avoided touch or even innuendo that she might misconstrue as pressure while she made her own decision about her life with him. Finally, she had come to his bed, and he began to mute the horror she had experienced on the sacrificial stone.

It had all been necessary, she told herself, as was this marriage. Perhaps, it had all been fated, as well. At times, she had felt in the grip of something beyond her, something that wouldn’t let her go.

Paul frowned as he faced the ancient city again. He was silent a moment before he answered. “I thought I was doing this for you.”

When she saw he would reveal no more, she came to his side. “What is it?” she asked in low tones, keeping her own eyes fixed on the ruins before them.

“I feel a stirring here.” He turned away from her to face the jungle toward the south, a blackened mass in spite of the moonlight.

Kate suddenly felt a chill. What would happen here now? Would she lose him again to the reined control he had once practiced or to a new spirit possession?

She stepped around him to search his face, to see if she could read what troubled him. His brown eyes remained fixed on the south. Hesitantly, she reached out her hand toward his chest, hoping her contact would bring him back to reality. Yet, she paused inches from his open shirt, uncertain still what psychic messages her touch might pick up when he was in a state like this. She remembered all too well the wash of personalities she experienced when she lay on the sacrificial stone while Paul’s bird-god figure smothered her with his body. Even the tiny bit of rock she first held there had sent ancient images of horror rippling through her.

But Paul was a man, not a stone shrouded in blood.