Anthropology grad student Kate Ferguson is in Phoenix studying the connections between Aztec/Mayans and native cultures in Arizona when she meets architect Paul Rodriguez. Embracing ties with the Hispanic culture and a maverick native group that is supposed to be older than other Arizona peoples, Paul is haunted by more than trying to reconcile his mixed heritage. He has deserted his position as shaman and leader of his people because of the group’s use of blood sacrifice. Kate has her own secrets. One is her gift of psychometry (being able to read psychic impressions left in objects) and the fact that she’s still a virgin. As Paul’s enemies draw nearer, Kate becomes embroiled in a power struggle between Paul and his twin sister Mala for the leadership of his people. Kate must learn to trust Paul, not only with her body, but with her very life. Can she do that? 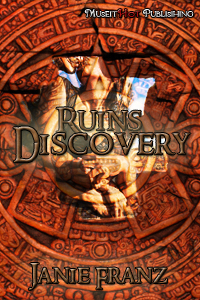 Kate frowned at that miserly response. He was native. He should recognize spirit beings. She almost held back the confession she was about to make but chose to plunge ahead. “I’ve been told I’m sensitive. My ego gets in the way sometimes—and, maybe, it’s really only heightened observation and intuitive skills. But I do feel things at times, especially when I touch objects—or people. Perhaps that’s why I like handling the remnants of ancient cultures. I get echoes, feelings, whispers.”

For the first time, Paul laughed—not cruelly, but with a heartiness, nonetheless.

Kate was confused and hurt. She had shown him a private part of herself, and he laughed. Her anger began to fire. She narrowed her eyes into slits and prepared to let her tongue rip into him.

He held up a hand and shook his head. “If you have that kind of gift, why did you have to resort to cross-examination?”

Kate relaxed a little. He wasn’t mocking her ability. “It’s not like a computer. You don’t get specific answers to specific questions. And even when you get something, it’s often erratic impressions, not in big neon letters with explanations. It just comes.”

“Yes,” he answered quietly with meaning. Studying the rock she still held in her hand, he added, “Untrained gifts are erratic.”

Kate was moved by his statement. “You sound as if you really understand.”

He raised his gaze to hers again. His eyes looked burdened. “I do,” he said, yet didn’t explain further.

After a moment, he asked, “Is this what you wanted to tell me, or is there something more?”

Kate glanced down, steadying her breath as she placed the little stone onto the path. Looking up, she said, “There are things I haven’t asked, Paul. Maybe things it’s better I don’t know. You’re the best judge of that.” She took a deep breath. This wasn’t going to be easy, she thought. Paul’s unknowns made it more difficult for her to develop a strategy with him. Continuing, she looked deep into his dark eyes. “We’re being thrown together this weekend where we’ll naturally discover answers to questions we both have about each other. But I need to explain—maybe I should have before. I don’t know what you expect, but I’ve never—”

Paul placed the forefinger of his right hand across her lips. “I know,” he whispered. “I think you’ve made that clear.” For a moment, he seemed to relax, focusing his full attention on her as his gaze wandered over her features. She saw it begin as speculation and grow quickly to interest. Slowly, he brushed his finger across her cheek, letting it slip under her hair to her neck where he rested his whole hand, his thumb brushing her cheek near her earlobe.

Watching Paul’s face soften, Kate mentally cursed Greg for playing on her doubts. She began to realize just how attracted she was to Paul. For the first time, she seriously considered the possibility of making love with him in the tent that night.

When Paul finally leaned to kiss her, Kate nervously met his lips. They were warm and moist, sensual but not threatening. His kiss verified the intensity of her attraction to him. She released a shaky breath as she pulled away.

He waited, his hand still on her. When her gaze shyly met his again, he said quietly, “You’ve nothing to fear from me. I’ve nothing to prove. Well,” he admitted with a slow smile, “at least nothing that I haven’t just proven.”

Kate started to protest, unsure about what, but feeling somehow subordinate to his experienced virility.

“You’re very proud,” he said with seriousness. It was a perceptive statement.

“And so are you,” Kate whispered, impulsively, from the fleeting impression she was forming of him.

“Yes,” he admitted with sadness, “perhaps too proud. Intimacy makes us vulnerable, not only to each other but in my case, to my pursuers.”

“They would find me,” he answered.

Kate wondered if that were some paranoid delusion of his. “Are you wanted?”

“That’s the waiting I feel around you here.”

“The waiting and…oldness,” Kate continued. She closed her eyes. Something vague like a forgotten memory entered her. She felt it, sorted it as familiar therefore identifiable, but she couldn’t name it. She shook her head and looked at Paul. “Oldness,” she repeated. “Something about you is old—not years, but centuries. It’s not just this ancient place.”

From under his pale blue shirt, Paul fished out a stone bas-relief hanging on a delicate modern silver chain. It was a smoothly worked face rather like an Olmec head but whose features weren’t as broad but more refined.

“It’s been with my people since the beginning. It’s older than these ruins.”

Kate quickly calculated. The earliest occupation of Wupaki Ruins was perhaps fifteen hundred years ago. From the bas-relief’s design, however, the effigy was probably closer to 3,500 years old.

Reaching to take a closer look, Kate asked, “Why do you wear it?”

Abruptly, before she could touch it, he replaced it inside his shirt.

“Why do you hide it?” Kate persisted.

Paul took both her hands into his. “Kate,” he said tightly. “I won’t ask you to share this. Maybe some day. I haven’t been able to fully share this will anyone from the outside…You’re in no danger from them.” He paused as she frowned at his statement. He looked down at their hands, took a breath, and explained. “We’re on land belonging to my people. Part of it is holy. Because we’re so near them here, I can’t risk putting aside my control for very long. I’ve eluded them for many years this time. I won’t lose that freedom for a dalliance no matter how pleasant it might be.”

Kate reacted to his obvious sincerity, though his words were fantastic—but just about as fantastic as her own admission. His words, like hers, were sanely said. Something in them, though, sparked her logic and her bluntness. “Is it freedom to be bound by strained control all of your life?”

Paul released her hands. He seemed discouraged, almost angry. He stared at her steadily for some seconds, and finally said, “I could ask you the same question.”

Kate winced. She could see her verbal defenses—the ones that usually got her out of pursing men’s arms—were useless with him—as defenses. He was too skilled in his own observations and retorts. She was well aware if he hadn’t chosen not to pursue sex with her now—for whatever reason— she would have probably slept with him that night.