In Sacred Stone and the Singing Bone, G.R. Richards weaves tales of humor, horror, and white-hot paranormal guy-on-guy sex. This mini-anthology consists of three works of fiction specifically assembled for readers who love a good horror story as much as they love sweaty male/male erotica. If you can’t get enough shudders, shocks, and shapeshifters, Sacred Stone and the Singing Bone is for you!

In Sacred Stone, Tuul is acting like a total asshole. Why do Alex Wood, Alex Knudson, and Bear hang out with him? Mostly, it's a matter of keeping friends close and enemies closer. The last straw comes when Tuul gets drunk in the cemetery and starts smashing monuments. The group can't possibly forgive his behavior. When the rock spirit living within a stone angel awakens from his slumber, Tuul and the gang discovers hard stone's incredible ability to uncover soft spots.

The Singing Bone is an erotic adaptation of a Grimm tale. When two brothers set out to capture a wild boar, the king is rooting for the younger of the pair. After all, the reward is his daughter’s hand in marriage, and Ardent is sweet and giving, while Mirrus has a reputation for being a vain prick. Before long, Ardent comes across Bruce the gentlemanly boar. They fall for each other and Ardent promises no harm will come to him. Mirrus has other ideas. As he prepares to slaughter the boar and claim his prized princess, Bruce discovers he has no problem sticking it to the prick...

The third story in our collection is The Wishing Wall. What is a Wishing Wall? Jesse soon finds out when he snaps up a tiny three-euro hotel room. In the small bed between two narrow walls, four hands arouse his naked body. When he opens his eyes, there's a marble man on either side of him! They are Nostou and Ven, two mystic masons whose souls live on in the wall, and they're ready to fulfill Jesse's every wish. 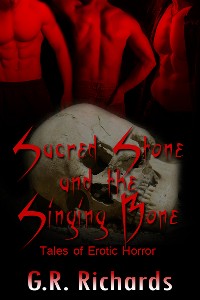 "...an incredible mix of humor, horror and hot MM loving. This mini anthology gives us three stories to enjoy and relish."

The guys gasped in unison as Tuul leaped down from the Celtic Cross. He landed in a crouching position, sending up the heavy scent of decomposing autumn leaves. If it had been any other guy, the fall would have killed his ankle. Tuul had the luck of the devil. That, or he was so perpetually wasted he couldn’t feel pain. The ground was muddy and wet beneath the leaf layer. He slid as he ran up the hill, but seemed to consider the journey worth the effort. “I’ve found her, guys—the girl of my dreams!”

“That’s a dude,” Alex Wood called. Though the angel’s robe draped down his androgynous form like a woman’s dress, his hair was slightly shorter than the average female angel’s. A dead giveaway. Plus, “Look at the chest. No tits.”

Tuul halted on the spot to stare up at the statue. With a shrug, he finally said, “Whatever. Chick, dude, I don’t care. Cemetery angels are hot.”

Wandering in the statue’s direction, Wood chuckled, “Yes, but does he realize it’s made of stone?”

“I used to think he’d fuck anything with a pulse,” Bear replied, following Wood up the hill. “I think he’s reached a new low.”

Alex Knudson almost tripped over an orb as he focused his attention up the hill. He ran to catch up. “I don’t know. Cemetery angels are pretty hot,” he said. “At least, I think they are.”

Following the kid’s gaze, Bear had to wonder if his doe eyes were more set on the angel or on Tuul. As much as Knudson joined in the banter, Bear always saw a flicker of awe in those young eyes when the idiot was around. They soldiered on up the hill. By the time they’d reached the top, Tull had an arm and a leg around the statue. “Don’t we make just the prettiest little couple?” he asked in a drunken falsetto.

The Alexes looked on in disbelief as he dry-humped the angel’s thigh. “Come on, get down from there,” Bear called.

“Yeah,” Wood joined in. “If you need to act like all crazy, do it at home. Bear doesn’t want to get haunted because of you.”

A grin broke across Tuul’s lips, and Alex Knudson followed suit. “Give it to him!” the kid laughed. It broke Bear’s heart to see a sweet young guy so taken with an asshole, but what could he do? They’d all been down that road at one time or another. It was the fate of every young person to fall for a bad boy. Bear only hoped the kid wouldn’t get hurt too badly.

As the idiot on the monument licked the stone figure’s cheek, Knudson egged him on. “Show him Tuul’s tool!”

Wood shook his head, lowering his eyes. “We’re all going to get haunted for this.”

“Hey, yeah!” Tuul shouted. Laughing like a drunken monkey, he unwrapped his leg from the stone angel’s body. He undid his jeans and let them drop to his ankles. Against the dark night sky, his tightie-whities glowed blue. He squirmed out of them. When they fell nearly to his ankles, his limp dick hung down almost that far. Bear half understood why a kid like Knudson would appreciate Tuul. His cock made frequent and random appearances. If he didn’t act like such an assface, Bear might even find himself interested.

Tuul’s cock pulsed as he ran his palm along the underside of his shaft. His flesh, which usually seemed darker than theirs, appeared almost as white as the stone sculpture. Bear didn’t have to look at the other guys to know they were mesmerized by dick. Tuul was pretty awe-inspiring. In fact, they were caught in such rapture they didn’t notice the greater miracle. Beside Tuul, the angel awoke. Bear noticed first. His movement was slow. Maybe that’s why they missed it. His head inched upright and turned to the guy jacking it—or, at least, drunkenly attempting to.

The stone angel rolled his shoulders. A thunderous crack resounded across the cemetery grounds as his carved wings broke from his back. They fell down to earth, planting themselves like giant lilies in the ground.

Bear’s feet planted themselves every bit as firmly. If fear could turn a man white, he was sure his skin would be forever pale after this insanity. A sense of awe overtook him as the folds of the angel’s robe rippled in the wind. His chest felt very warm and full, but he still would have run if he could. It was no use. He was paralyzed with terror.