After thwarting a traitorous member’s plan to steal the crown, an overwhelming number of enemy forces surround the alliance, forcing them to flee into the bowels of Cragspeak. Their route of escape forces an encounter with a vicious band of Vorghans, towering canine bipeds dripping a most foul disposition.

Despite enduring relentless hardships and heartbreaking losses bent on crushing the alliance’s resolve, a series of unexpected clues coaxes them to continue their treacherous journey eastward into the dark realm of Rhöengard.

Their treacherous journey takes them to the ancient ruins of Griffin’s Peak whereupon they discover its dreadful guardian, a frightful Dymwren and his minions. When several of their disciples are murdered by the enemy, the Bloodfist Monks, religious outcasts known for their disciplined teachings and unrivalled battle prowess, willingly join the alliance in accomplishing their dreadful task.

As Rhöengard collapses under dark rule, the alliance evades numerous enemy encounters in time to warn the gathered allies in Mhoren of a massive foulskin black tide to the north. With steely determination, Nanthara prepares for its most epic battle. 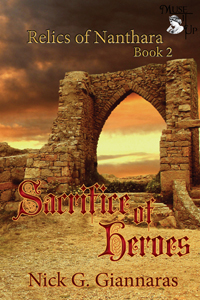 Vindicar peered through the gap. “This breach descends down close to one hundred feet to a waterway. It looks to serve as the Itunns’ water source.”

Sir Angelo inspected the skull and rope, running his hand along the tatty threads and dipping his fingers into the small puddle of water in the thick cranium. “This skull might be our only avenue of escape. If not, we can use the rope to lower ourselves down.”

“You intend for us to escape down there?” E’Umae asked with a fearful glance through the gap and into the blackness.

“If there are any other avenues of escape, I, for one, would be all for it,” Sir Angelo said. “Let’s go.”

Vindicar grabbed the bulky rope and threw it over the edge to the bottom of the drop.

Boren checked the strength of the knot around the giant bear skull and threw Azin an irritated stare. “Will you quit yer selfish grabbin’ and nabbin’. I don’t mind leavin’ you here.”

“My apologies, Boren. There is such a plethora of interesting objects here, my mind is in a tizzy.”

“Tizzy?” The irritated Dwergen ran a thick hand down his face, over his beard, and off the bottom tip in disgust. “Yer flip-floppin’ personalities are confusin’ me, Alkanien. Make up yer mind as to who yer goin’ to be.”

“Your admirable request is not so easily filled, my fellow adventurer. Unfortunately, it is

simpler to speak than to do.”

Before Azin could finish stuffing his pockets with silver and gold coins, Courtar noticed Vindicar standing motionless as he leaned toward the tunnel.

Courtar felt the unmistakable vibration, pointing a shaky finger toward the entrance. “I told you the lying comes back.”

“Hurry,” Sir Angelo said, motioning to the others to start shimmying down the rope.

The tremors grew heavier as Sir Angelo glanced at the entrance, waiting for the Itunns to appear. Vindicar’s voice broke his concentration.

“You are the alliance’s leader. You must stay with the group,” Vindicar said.

Azin stepped between the two disagreeing paladins. “You two cackling hens can stay. I’m getting out of here.”

Sir Angelo and Vindicar both grabbed the assassin by the collar and yanked him backward.

As Sir Angelo went to reprimand the assassin, a low, drawn out guttural growl rumbled the knight’s belly. Everyone eased their heads toward the entry where they stared at a hunched Itunn, both heads snarling in a primeval rage, each fist clutching their wicked clubs.

Sir Angelo’s steady breathing was unable to slow his rapid heartbeat. “Everyone spread out. We’ll only have a moment to retaliate if it charges.”

Infuriated, the Ituun roared and stepped into the lair as the second beast entered the opening, growling with a similar hatred at the intruders.

“Any other bright ideas, Mr. Leader?” Azin asked in a sardonic tone.

Sir Angelo gave a slight head shake. “Uhm, no. Not at the moment.”