Darius set out tonight to meet his end. Instead of meeting true death and seeing the sun for one last time, he stumbles upon a reason to live. After a millennia of being held a sex slave by the Vampire Queen, he finally finds his mate, but she lies dying on a park bench. Will Darius be able to sacrifice her soul to save himself? And will he risk going back to the one person he desperately wanted to escape, to help his mate through the change? 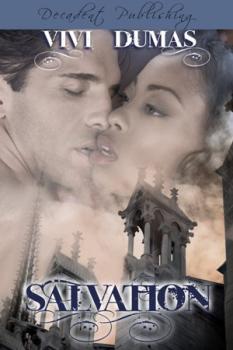 She ruined him to love, turning him into her sex slave, diminishing his strength as a male. When the Vampire Queen came to him, he’d been honored to be chosen, but after an eternity of being chained to the wall in the damp, dark crypt, honor was no longer a word he understood. Shame and anguish were his brands. His lust for all things, including blood, left with his will to endure long ago.

But today, the day he planned to take his departure from this world, the thirst returned, calling to him from this exquisite creature waiting at Death’s door. Darius’s harsh laugh echoed amongst the trees. Fate was a tease. She played with his emotions and tempted him further into condemnation, searing his torture just as the straps of silver singed their pattern into his flesh.

The iron-tainted smell of blood permeated the air. Darius stared into her angelic face. With her eyes closed and lips slightly parted, the childlike innocence of her expression pleaded with him for mercy, but not the kind of mercy he struggled to administer. The death she wanted was not the kind he was prepared to give. He reached out and fingered a lock of her golden brown hair, then caressed the side of her round face, wiping the dried blood from her mouth. She was lovely. Could she accept him as he was— a broken monster?

The Billionaire and the Cleaner (MF)
Sam Crescent
In Shelf
$4.99
Tweets by
sirenbookstrand