All three books in the popular Sandbridge M/M romance series by Elizabeth L. Brooks and Lynn Townsend are now available in one box set! Contains the stories:

Daybreak in Sandbridge: Scooter's life is definitely on the upswing: his business is successful and he's engaged to the most amazing man he's ever met. But when Andy is called home to attend his dying father, Scooter is forced to realize that he knew less than he thought about Andy's past. How can Scooter compete with the sizeable fortune Andy is set to inherit or the lovely and stylish girl Andy left behind?

High Noon in Sandbridge: Life takes a sudden turn for Scooter and Andy when Scooter's sister meets an untimely end and they're suddenly guardians to a niece they've only met a handful of times. Billie is stubborn and hot-tempered and not remotely interested in making a life in the one place that her mother had sworn never to return. Will she ever learn to call Dockside and Sandbridge home? 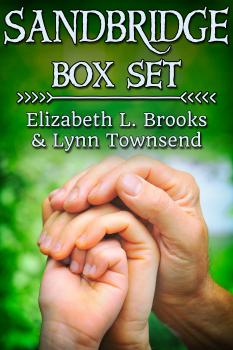 FROM "Nights in Sandbridge"

Grinding was easy, the body took over the rhythm without too much coordination. The only easier dance Scooter could show him was slow dancing, stupid spinning around in tiny circles. Everyone who'd been to middle school could slow dance. But grinding had the advantage of also being sexy, let him put hands on Andy. And it was fun to do, in clubs, feeling another warm and willing body pressed up against his. God, he hadn't been out dancing in a long, long time, not since -- not thinking about that, no.

Both hands on Andy's hips now and Scooter moved, rocking his pelvis, his fingers tapping the beat out against the skin between Andy's tee and the waistband of his jeans. "There you are," he said, encouragingly. Every third beat, Andy's perfect backside brushed against Scooter's thigh, and Jesus Christ, Scooter was going straight to hell.

The song was nearly over when Andy's spine ... undulated was the only word that could possibly apply, rolling Andy's body up snug against Scooter's, and then he twisted and his chest was pressed against Scooter's, his arms curling sensuously around Scooter's neck, one leg hooking lightly over Scooter's hip. "Did you know the tango is considered a ballroom dance?" he asked, all wide eyes and faux-innocence.

You little tease. And Scooter was almost angry at that, how much he wanted and how little he could actually have. Andy had come into his space, had mocked him and tormented him - never mind that teaching Andy to grind had been Scooter's idea in the first place -- and now he was challenging Scooter's skills? The fuck. Scooter shifted his weight and took Andy's hand, pushing him into an aggressive stance. "You know the girl's part?"

Something sparked in Andy's eyes then -- challenge or anger, Scooter wasn't sure. "I can follow," Andy said. "Can you lead?"

Jace Everett's "Bad Things" probably wasn't the best music for a tango, and Scooter hadn't done it in a long time, but Andy probably didn't weigh much more than a keg of beer. Scooter spun Andy out until only the tips of their fingers touched, brought him in on the beat and drew him into the salida, their feet flickering as Scooter walked Andy backward around the sofa.

Scooter was fine, he was good, he was letting anger push him through the music, his motions precise and yet fluid. Right up until he dipped Andy backward and ran a caress, not touching, but pretending to, down the side of Andy's face, along the line of his chest. Andy brought his foot up, rubbed the top of his sneaker against the back of Scooter's calf and then Scooter was on fire.

He wanted to shut Andy up, shut him down, make him tremble with desire, listen to him beg to be kissed.

Scooter remembered that stupid movie, one of his girl friends back in high school (he was her mandatory gay best friend) had loved it, they'd watched Strictly Ballroom a dozen times, or seemed like it. "The tango," he said, not quite breathless, "is telling a story about love. Look at me like you're in love."

Andy laughed, the little ass, throwing his head back and showing off his delectable throat. "You've actually seen it!" he crowed. "Though it's the rhumba, in the movie. But I don't know that one."

"'Course I've seen it," Scooter said, moving with the demands of the dance. "Had to get that stamp on my gay card before I could get my license."

Andy spun, out and then back, winding himself into Scooter's arms. Scooter dipped him, and they were close, almost too close, nearly cheek-to-cheek, and Andy's arm was around Scooter's shoulders. "I've been looking at you for weeks, you know," he whispered into Scooter's ear. "But it takes two to tango."

He shouldn't. He shouldn't. But oh God, he was going to. He lowered his mouth toward Andy's 'til there was room for one or two, but not three sheets of paper between them, then stopped. He couldn't. Not without permission. "Andy?"