Knox Fort only wants to be left alone. Eight years ago, his world crashed when his mate walked out on him. After a stint in jail for a bar fight, he did the only thing he could. He emotionally closed off to everyone and everything. Now he is content to act as a sentinel for his pack and work at his auto garage.

When Emerson Kingston returns home to deal with her mother’s estate, car trouble and ex-lovers aren’t in the plans. But opening old wounds is sometimes the only way to move on, if moving on is possible with a man who has closed himself off to the world.

Fate is a wicked bitch who doesn’t always care what you want. Can Knox and Emerson figure get their second chance, or will it kill them in the end? 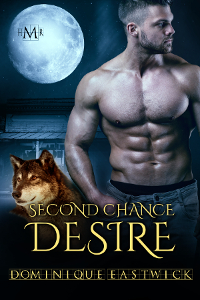 Picking up his pace, Knox entered the garage, slammed down the bay door, and ripped his shirt over his head, wrapping it the best he could around the wound. He needed to rest and let the damn thing heal. In the bathroom attached to his living quarters, he found an ice pack and an ace bandage to hold it in place. He had just snapped the ice pack, activating it, when he smelled her behind him. “I said leave me alone.”

“Well, I fucking implied it.”

“That you did, but as a medic, I can’t very well let you bleed to death, no matter how stupid you’re being.” She reached for him again.

She had left his heart bleeding once. This small cut was nothing compared to the havoc she had left in her path. He needed to shift and heal. And he couldn’t with her here. “Leave. Me. Alone.”

“Knox, please.” She took a hesitant step forward. “I get it. You hate me. But if you pass out from loss of blood, I have to call EMS to take you to the hospital.”

She was right. If he didn’t stop bleeding, eventually he would pass out; the pack didn’t need him shifting in the ER. “Fine. Do what you need to do.”

“I’m not going to the hospital, so it’s here or nowhere.”

She blinked. “I need to see what I’m doing and this is what…a forty watt bulb? Perhaps out in the garage where the light is better and I have actually space to work.”

“Fine by me.” He had wondered where she planned to set up her first aid station in a room that had one pedestal sink, a shower, and an industrial toilet with no tank.

She rummaged through the medicine cabinet and held up a bottle of rubbing alcohol. “Is this all you have?”

“I didn’t make out my shopping list with getting stabbed in mind. Let’s get this over with.”

She followed him down to the shop. “Where are my car keys?” He waved her to the lock box and tossed her the key to it. Reaching in, she lifted out the pink chain. “I have my medic bag in the trunk. Be right back.”

Something Wicked (MF)
Jenika Snow
In Shelf
$2.99
Tweets by
sirenbookstrand