They say your first love is unforgettable, but Allison Southby would love to forget. Thankfully, she’s always had her work to keep her mind off her non-existent love life. But when her boss and mentor dies mysteriously, and a rival company threatens to steal their customers, her focus should be on preserving her mentor’s legacy and the company she loves…and yet, she can’t keep her mind—or her hands—off her late boss’s son, Adam. Who just happens to be the same man who left her heart in pieces when he ran from her bed after a single night together, and has kept her at arm’s length ever since.

Detective Adam Byrnes needs to get back to the life he’s built in Phoenix. Sure, it’s far from his family, but it also keeps him away from Allison…and temptation. But between the questions surrounding his father’s death, and keeping Allison safe, he can’t seem to leave the city of Chicago.

With danger swirling around them, can they find the love they once shared? 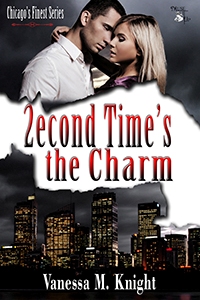 Loraine had asked her to attend.

Herb would have wanted her here.

Allison Southby’s stomach churned, and her hand grasped the gold Celtic knot necklace around her neck. Calm washed over her as the familiar texture of the rope design slid through her fingers. She stared at the entrance of Loraine’s massive house in the Chicago suburbs, where Allison had received the necklace so many Christmases ago. In fact, it was where she’d spent every Christmas for more than ten years.

She drew in a deep breath and rang the bell next to the double wooden doors. A hay-like scent wafted from the fall Crocus lining the portico. Maybe it was cancelled and no one’s home, she hoped as she stood before the placid home, the music of finches and sparrows cutting through the tranquil morning.

Hope faded as the house shot to life, noise erupting behind the door right before it swung open. Instead of the butler Allison expected, Adam Byrnes stood before her, his short, brown hair disheveled. His chiseled cheekbones and angular face were the perfect backdrop to his provocative green eyes.

Her gaze moved down his strong neck to his form-fitting black sweater. The rolled sleeves gave her a perfect view of his bulging forearms. His dark straight-leg denim jeans hugged his hips, and, Heaven help me, other parts of his anatomy. Her mouth watered in appreciation. Apparently, a cop’s life agreed with the man. He looked amazing. Dammit.

Was it too much to hope for a paunch and receding hairline?

Her eyes held their position until she heard an amused, “See anything you like?” from the sex-on-a-stick trance-inducer before her.

Damn. She blinked as the mortification crawled up her neck. “Not at all.” She prayed she said that with conviction. She might like what she saw, but she refused to admit that to him.

A cleansing breath left her lungs as she raised her eyes, set her chin, and met his stare. “Do I…know you? You kind of look like Loraine’s son, but I haven’t seen him in years. Wait” —she snapped her fingers— “I know. You’re the new butler.”

She could feel Adam’s amused eyes stare right through her. She hated that about him. He had this annoying way of seeing everything she was thinking, especially her main weakness—him. But this time, she was ready. She was not about to let him affect her. She was way too strong and smart for that now.

That wayward sex-on-a-stick thought was a momentary lapse, but easily overcome. After all, it didn’t count since she didn’t say it out loud. Yeah. No matter how flimsy, that was the story she was sticking to.

“How was your drive out?”

“Fine.” She looked past his shoulders into the house. A strong desire to run far, far away overtook her. But her feet wouldn’t move. They were plastered to the ground, which was probably best. She needed to be here.

She could handle it. After all, she was a successful businesswoman. She could do this. She could be an adult and have a civilized conversation. She managed to pull that off in spades as the Vice President of Byrnes and Company.

“Fine.” Why wouldn’t he just move out of the way and let her in? Just because she could have a civilized conversation didn’t mean she wanted to.

His face fell as he reached for her arm. Sadness crept into his eyes as he asked. “How are you?

The muscles in her jaw ticced as she fought them down. The relaxed-no-worries smile would not leave her lips. She wouldn’t let it. She was fine… well… she would be fine. No one needed to know the extent of her sadness, especially him. She did not want, nor need his pity. “Fine.”

“That’s a lot of ‘fine’.” His eyebrows furrowed in concern. She should have known that emotion was temporary, and sure enough, the concern left his eyes and a mischievous glint took its place. “Perhaps you know a different word?”

A different word. There were so many words she would have liked to call this man, share with this man over the years, and yet there were so few appropriate places to say them out loud. In fact, the day of his father’s will was read was definitely not the place to share those words. Jerk, joker, jackass… and those were just the Js. There were so many more letters in the alphabet.

“Since you’re not going to answer me, would you like to come in, or should I have everyone move outside?” He motioned her into the foyer. Despite her annoyance, Allison found herself following him through the ornate hallways to the Byrnes’ family library. She could practically taste the blood from biting her tongue. The man drove her crazy.

Allison now remembered why she’d managed to evade Adam over the years, which wasn’t easy since she worked for his father. But, somehow, she’d done it. She’d avoided dealing with the arrogant, pompous, annoying, cocky assh… oops. She was thinking all of those non-sharable words, again.

Unfortunately, he didn’t act like those non-sharables all the time. Sometimes, he was sweet and kind and caring. Of course, those momentary lapses in assholism had led her to drop her guard, and ultimately her panties, before he ran away screaming for the hills. She’d known he wasn’t the staying kind, yet she fell for his charm. The man exemplified her idiocy.

She hated reliving that painful betrayal over and over again. So anytime she’d been faced with an opportunity to see him, to dredge all that up, she’d find something—anything—more important to do, which usually included her sister and ice cream.