Claire Sawyer's life is about to change in a way that she never could have imagined.

Blind since a terrible childhood accident, she dies for the second time in her relatively short life only to find herself in the arms of an angelic being.

Is he her guardian angel, or the monster responsible for the death of her parents so many years ago?

Claire will search for her answers as she is swept up into events involving the divine and their relation to the vampires and werewolves that she encounters in her extraordinary journey to discover the truth.

Warning: Please be advised that this story of 4,600 words contains graphic sexual scenes that are described in an explicit manner. It is intended uniquely for those persons of 18 years of age and older. 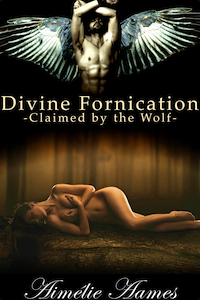 In the emptiness, she heard a voice and instantly, Claire knew that it belonged to a man she had seen just once before, a man clothed in a skin of gold with a smile that shone with the light of the sun.

His voice was musical and light, almost humorous.

With no warning, Claire felt warm hands upon her face. His touch was gentle as he intoned, "Have no fear, little one. I am here, as I always have been."

The scent of exotic spices filled her nose. His odor was a rainbow of citrus and sandalwood. Cinnamon and ginger. And under it all, there was the scent of a man in his prime. Youthful and powerful.

Claire could not have said why, but it was as though she could smell heavy muscles sliding under golden skin.

Then, in the darkness, there was a growing light. She gasped and understood that she was falling to her death. Or, had already fallen and lay bleeding the last of her life's blood out at the bottom of an elevator shaft.

With no sense, in the rational illogic belonging to the dreaming, all Claire could think of was the terrible ache that his voice had awakened between her legs. She had never known a man. Damaged goods, as they say, and her sexual experiences were limited to furtive touching, alone in her own bed, that finished in weak tremblings that left her unsatisfied and unaccountably sad.

But now, in her last extremity, the warmth of his golden hands upon her face, Claire felt an itch deep inside.

The light grew to suffuse everything around her yet did nothing to relieve her blindness. She saw nothing, but felt those warm hands, gentle as ever, slip down the sides of her neck to rest briefly upon her shoulders.

Her own smile stretched her lips. Of that she was sure and she thought that if this is what it was to die, then it might not be so bad.

The scent of spices accented in a man's rich musk filled her nostrils. Then those wonderful, hot hands drifted down to cup her breasts.

Claire laughed. It was ridiculous to be at death's door and discover that she was ticklish. A soft chuckle answered her and thumbs she could not see stroked across her nipples.

The laughter in her throat died away to become a low moan, then her breath caught as unseen fingers rolled her nipples between them, pulling tenderly with a slow motion that felt as though it went on without end.

"Yes, Claire. We have all the time we need. All the time that is necessary.... 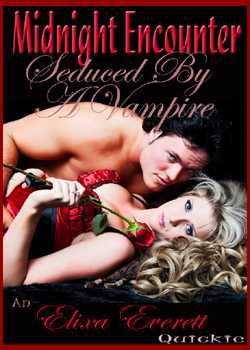 Ready or Not (MF)
Josie Shea
In Shelf
$3.50
Tweets by
sirenbookstrand