In this uncertain world full of lies and deceit, who doesn’t long for a mate that embodies solid values? Who doesn’t want a friend you can trust?

Jake Stone is searching for a woman whose values match his, a woman who will be Semper Fi—always faithful. When he walks into a bar one night to propose to his fiancée, he has no idea that he’ll be going home with two women he’s never met before.

Connie Woods has a thing for Marines, so both Jake’s looks and personal code draw her. She and her best friend, Amanda Foster, decide to spend a wild night in a hot ménage with Jake, determined to cheer him up after he is stood up and two-timed by the woman he planned to marry.

But a non-ménage sexual encounter with Amanda, and an upsetting first date with Jake, makes Connie think she’s lost both of them. Meanwhile, Amanda is hurt that her best friend won’t talk to her about what happened between them. And, Jake thinks he’s screwed up his chances with Connie. Can each of them find the love and happiness they are seeking?

Semper Fi, all about finding faithfulness and friendship in our uncertain world, reassures us that values still matter. 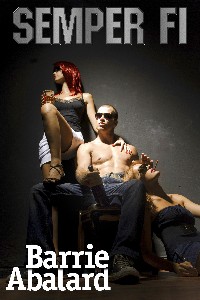 “...a good story...the plot keeps you turning the pages.”

Amanda laughed her fabulous laugh, threw back her fabulous hair. If Connie’s eyes weren’t already green, she would have sworn they’d turned that color.

Just because I want Jake, but he wants Mandy, is no reason to be jealous of her beauty. She’s always been there for me.

“And you know, what you did was so yummy.” Her friend laughed again, squirming in her seat. “Not many men know what to do down there. Sometimes it takes a woman to know how to please another woman. Want to get together with Jake again?”

Now it was Connie’s turn to squirm in her seat as she recalled his probing, his gentle sucking, and his flicking tongue’s tip. She wanted to rub herself right here, right now. She closed her eyes, feeling herself grow wet as she replayed sensations in her mind.

Amanda’s voice was husky. To Connie’s surprise, her friend had pulled the vehicle over while she was fantasizing. Now, Mandy was staring at her as if she were a tasty morsel. A hand landed on her knee, making Connie swallow hard.

Mandy stroked her thigh. “We don’t have to include the Marine in our games, if you’d rather not.”

Connie said nothing, watching as her friend unsnapped her jeans. She felt her nipples harden, her arousal making her ache down below.

Leaning back, she closed her eyes while Mandy’s hand slipped inside her panties. Her elegant, slim fingers were as talented as Jake’s large blunt ones.

“Wow, you’re so wet,” Mandy whispered as her index finger teased Connie’s clit until she was ready to come. Then her friend slipped two fingers inside to massage Connie’s G-spot, her thumb working on the clit.

Connie’s thigh muscles trembled as her friend’s fingers teased her, only to stop just short of orgasm, once, twice, three times.

“Come,” Mandy crooned. “Come for me, Connie. Scream for me.”

This time, Mandy’s fingers did not stop. Connie felt thrills emanating from her core, and that funny pit-of-the-stomach feeling you have when you ride a roller coaster. She gasped as the orgasm broke over her. It was almost as good as the one she’d had when Jake had fucked her the first time, from behind, while Mandy had sucked her nipples.