The complete series, now available in a boxed set!

Kira’s life is forever changed the day a lusty war band of Vikings raids her village. Taken as a prize by the Northern King Barek, lovely Kira’s innocence is roughly stripped away before she is carried off across the sea to serve her new Viking master. Barek is a harsh disciplinarian, demanding complete submission from his nubile bed slave, and taking great pleasure in the punishment he inflicts on her tender flesh. Despite the king’s jealousy, one man plagues Kira’s dreams and leaves her breathless with need—Drengr, the fierce warrior who stole her heart with an act of kindness. As Kira finally gives in to her desire and takes the massive Northman as her lover, she is faced with the consequences of their stolen pleasures when she learns the sinister plan King Barek has in store for her. 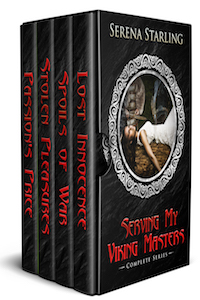 Riona and I picked up our skirts and sprinted for our lives. I heard footsteps behind us, the sounds of someone crashing through the brush, as my gaze focused on the terrified eyes of little Neasa at her mother’s shoulder.
Then I was knocked headlong into the debris of the forest floor with a large body on top of me. The force of the fall stole my breath, and I gasped for air as I was roughly turned over to face my attacker.
A young Northman stared back at me. The ends of his long hair brushed my face as bright blue eyes bore into mine. His cheeks were smooth, not yet boasting the heavy beard of a full grown man.
“Run, Riona!” I wheezed. The Northman seemed to be alone. If I kept him occupied with me, there was a good chance Riona and Neasa could make it safely away.
Riona hesitated, sobs wracking her body as her terrified gaze turned from me to the Northman. He made a move to rise, reaching for her. I wrapped my arms around him tightly to hamper his movements. “Run!”
The urgency in my voice seemed to compel Riona to action. She turned and ran, not looking back, as the Northman struggled to extricate himself from my tight embrace. He managed to loosen one of my arms, and my fingers brushed against the hilt of the dagger at my hip. I pulled it from its sheath and attempted to drive it into the back of the Northman.
The blade didn’t sink deeply into his flesh as I’d expected, instead deflecting to the side as though I’d hit a rib. But the young man cried out in pain and reared backward, his hand fumbling to reach the dagger. He grabbed my wrist, forcing me to release the weapon where it was stuck in his body. I struggled against him with the strength of terror.
Another Norse voice rang through the night. “Tannr! Where are you, boy?”
“I am here,” the youth replied, voice shaking.
My heart sank as a very large Northman approached where we lay on the ground. Full grown, he seemed twice the size of the one who held me down. He knelt, grumbling, when he noticed the dagger protruding from Tannr’s back. He examined it closely, then pulled the blade out in one swift motion. Tannr cried out as his body tensed atop mine.
“Stop your sniveling, it’s naught but a flesh wound.” The large Northman pulled Tannr away from me. “What do you have here?”
I rolled quickly and made to bolt, but the man grabbed my shoulders and pushed me back to the ground. A face resembling my attacker peered down at me, the same bright eyes and golden hair, but with a bushy blond beard. As the Northmen studied me at length, the lusty glint in his gaze reminded me of the men I sold my uncle’s catch to at the docks.
“It seems you’ve finally done something right, boy,” he chuckled. “Even if your lovely prize did stab you.”
His rough hands moved over my body as if assessing an animal for sale. I squirmed in his grasp to no avail; he held me easily. I shrieked in protest, eliciting a laugh from the big Northman. He ran his hand down my side, then squeezed my buttock with an appreciative growl.
The Northman raised my skirts, sliding his hand up my leg. “Yes,” he ground out, his touch rough against my flesh. “She will do very nicely. And if she’s still a maiden, she’ll fetch a high price indeed.”
His breath was ragged as I writhed in his grasp. Furious tears sprang to my eyes as the Northman stared down at me. “I might decide to keep this one for myself, after all. She is quite lovely.”

Claimed by the Viking Warrior
Georgia Fox
In Shelf
$2.99 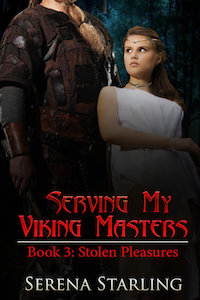