Rachel’s heart stopped when he entered the restaurant. He was rugged and sexy. His smile lit the room, but the darkness in his eyes hinted to more. Drawn her into his sports car, he sped her away to a world of luxury and privilege leaving all of her troubles behind. Rachel breathed in his passion like a drug. To leave him was like death; but to be with him was to dance with the demons.

Rachel practically ran down the wide dimly lit hallway. Pausing at the door, her hand shook as she reached forward. Pushing on the door she entered the doorway to find Brick holding a glass of what looked like scotch. He stared at her intensely. She melted under his gaze. And unable to move past the door frame, Brick stepped to her, grabbed the back of her neck and kissed her hard.

Rachel's mind swam as her body tingled. Lust bubbled through her veins as if it were life itself. And feeling him cradling her head, she lifted onto her toes and pressed against his firm lips as he pried open her mouth.

Twirling and tugging on his wide tongue, Rachel reached up around his neck and let her knees weaken. Brick, holding her with one hand and the scotch with the other, moved her to a side table. Releasing the glass, he grabbed her on the small of her lower back and pulled her stomach onto his clothed c**k.

Brick's wide hand spanned her tiny frame. Gliding it down past the curves below her a**, he slid his hand to the back of her thigh and lifted it. Pushing his throbbing bulge onto her tight uniform pants, she could feel him against her pelvis. And when he lifted her off of the ground lining his c**k with her engorged lips, a pulse shot through her loins. Rachel moaned.

Dancing with their tongues, Brick pushed his groin harder onto hers. He was amazingly hard now, and wrapping her legs around his waist she wanted him more than she had ever wanted anyone. She inhaled him like a drug. And immediately needing another hit, she breathed him in again.

Brick turned the two around and headed for the bed. Standing in front of it, he grabbed hold of her by the ribs and ripped her off of him sending her small body flying onto the sheets. Rachel had never been so manhandled and was confused when she looked up from the satin. Quickly reconnecting with his eyes, he stared at her as he yanked off his shirt and shoes then unbuckled his pants. Rachel's chest heaved with passion. She wanted to remove all of her clothing and lie naked for him, but she couldn't move.

Brick, his lightly hairy, toned chest in full display, stared down at her like prey. Rachel, still propped on her elbows, tilted her head back showing him her neck. And when she felt Brick’s teeth lightly tighten around it, her body trembled in pleasure.

Brick tore at her clothes as she entered the pangs of orgasm. She couldn't stop herself. His bare chest pressing against her clothed nipples were enough. And when he stripped her of her pants and pushed the tip of his hard meat against her still throbbing lips, she screamed. 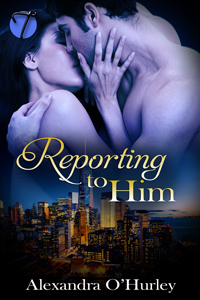