Andrew's days are numbered. With less than a year left, he delays destroying the next demon so he can enjoy time with his wife. He also aims to secure a home for Emily and their unborn child, but they must move around frequently to avoid running into the enforcer from heaven. Their dear friend Matt arrives to spend Christmas with them and offers to help. The holiday seems perfect until the person they've been dodging shows up.

Emily feels responsible for Steven's appearance. To avoid more trouble with him or the people in charge upstairs she encourages Andrew to pursue destroying the next demon. Together, they leave to search for the evil man. When they find him, she suspects he is a terrorist.

Andrew and Emily's faith are tested. Love comes with great sacrifices. Loss leads to overwhelming misery. They were destined to fall in love, but will they get to share a happily ever after?

He tugged her to the far side of the pews instead of going down the center where most people were heading. Attendance for mass ranked high. Row after row had few spaces left. Andrew found a pew not quite halfway up from the back and with enough room for three people. He paused to allow Emily to take a seat first.

She tugged her jacket away from her shoulders. “This place is huge. I can barely see the front.” After she removed her coat, she set it across her lap.

Andrew took off his jacket too. “You don’t need to see much. There are speakers, so we can follow along.”

Emily removed the hymnal from the shelf in front of them. He set his coat to his other side to save a spot for Matt. His red tie dangled in front of his chest. He’d picked the color to match her dress. Arm behind her and resting on the pew, he glanced around. So many people had colored auras. They out-numbered the white ones.

The service began with the sound of the organ. Even at a distance, the music was overpowering and called all to give it attention. A group of kids strolled out from the back and stood in rows near one corner. When they started signing, everyone watched and listened intently. People streaming into the church hurried to find a seat.

Andrew looked over his shoulder and scanned near the entrance for Matt. He found him standing on the far other side of the room. His arms were crossed and his expression seemed tense. He’d seen that look on Matt before when they’d been security guards for the country music singer Andrew killed. It was as if Matt were watching, waiting, and studying. He tried to follow Matt’s line of sight, which was directed at a section of people sitting in pews on the opposite side of Andrew. Everyone had their gazes forward as the children’s choir sung. But one person with short, dark hair and wearing a leather jacket had his attention elsewhere.

Alarm shot through Andrew when he saw Steven sitting at the end of a row. Heart gearing up for a marathon, Andrew jerked his head forward. How did Steven find them? Did he follow them from the concert? Had he been following them longer?

Emily put her hand on his thigh. She gave him a slight smile. Andrew swallowed hard and forced his lips to move, if only a little. He had to protect her. He couldn’t let Steven near her. They were in a church on Christmas Eve. Surely, the enforcer wouldn’t try to hurt her. 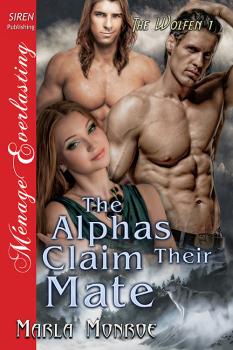 The Alphas Claim Their Mate (MFM)
Marla Monroe
In Shelf
$3.99