“Sit tight.” Baron snatched the garage opener from the sun visor and shot Patience a stern sideways glance. “And I’m not asking.”

Before she could respond, he left the car and aimed the keys in her direction. With the wok wok sound, the locks were engaged in an instant. Apparently satisfied, Baron walked ahead, sliding on ice before he paraded up the driveway and around the exterior of her home.

Patience scanned the yard, certain someone was watching them. Then again, that particular feeling wasn’t necessarily new. With collected family enemies, she’d learned to live with danger.

Baron reappeared. Tall and built like an indestructible machine, he carried himself with the confidence often exhibited by a Navy SEAL or perhaps a Marine. At the very least, he looked like a badass with some serious attitude.

He pointed the garage door opener at the house. Assuming he must’ve thought it was safe enough to enter, Patience immediately unlocked her door and hopped out.

“Patience, I didn’t ask you to get out of the car. Go back.”

“Look, Mr. Man, I know you think you’re in charge of me, but just because Mark and Spenser called in their favors, doesn’t mean…”

Pow! Puppow! Pow! Pow! Bullets ricocheted off the tin roof, covering her next door neighbor’s shed. The impact from the gunfire made the ice and snow skip across her front lawn. Even more disturbing was the proximity. Several rounds had been fired right at her feet.

“I’m okay!” Pivoting left, she swung the car door open and ducked behind it, aware then of Baron’s heavy footsteps as he ran toward her. Fighting the violent tremors shooting through her body, she crawled inside the sports car.

Before she had a chance to gain her bearings, Baron was there. “Scoot over.” He didn’t give her time to respond. Instead, he scooped her up and tossed her over the console, propelling her body to the driver’s seat. “Damn it, woman! I told you to wait.”

Now the passenger, Baron clutched his pistol in hand. At the same time, he aimed the garage opener at the vacant space before them. As the door lowered, he yelled, “Go!”

She stepped on the gas and hauled ass forward, only to barely brake in time to miss crashing into the house. Behind them, another round of shots pummeled the back of her car.

“Damn it, Patience! I meant get out of here!”

She’d failed to notice the closing door. In the past, she’d managed to put on brave fronts. She was seconds from blowing her courageous act. “How was I supposed to know you were shutting the garage?”

“Doesn’t matter. Go! Drive!” Baron rolled down the window and hung out of the car, firing his automatic weapon. “Anytime now, baby!”

Jolting out of her debilitating angst, she threw the car in reverse and wheeled out of the driveway. Baron never stopped shooting into the trees that lined the vacant lot between Patience’s house and another neighborhood.

A second later, they were hauling ass toward Fletcher. Shaking like a limb, she tried to pull it together, but it was no use. Someone had been waiting for her. They’d scoped out her home and treated her like a target.

Baron placed his hand on her wrist, apparently under the misguided impression that one touch would calm her in some way. “I won’t let anything happen to you.”

She pulled in the emergency lane and slammed the gearshift in park. Then, she buried her face in her hands and took a few deep breaths. How could he promise to protect her after what he’d just seen?

“Patience.” Baron took her hands in his. “Listen to me. As long as I draw air, nothing and no one will ever hurt you. Do you believe me?”

She searched his eyes, needing to believe him, wanting to take stock in everything he told her, but also realizing they were too close, dangerously close to betraying all sorts of trust. After an uncomfortable silence, she reluctantly nodded.

Never one to step over the line between friendship and an intimacy shared only between lovers, Baron brushed her fingers with his kiss. “All right then. Let’s get someplace safe and give your fathers a call. Let me talk to them and see how they want to handle this. Can you drive?”

“Can I drive?” She tried to make light of the situation when she stepped on the gas but the car only made that revving sound.

She was in neutral.

“Guess I have my answer,” Baron said, exiting the vehicle.

Patience watched him walk in front of the headlights and for a moment, she was as lovestruck as she’d ever been. Baron was there for her. He’d fight for her and he would definitely try to keep her safe. Where were Mark and Spenser when she needed them? Her lovers, as usual, were playing gigs.

Thanks to hit singles, they were always on the road.

Like Baron had just casually mentioned, she had her share of answers, too. The answers were never really a problem for a woman in love. The questions were the issue. In her current predicament with Baron, neither one of them bothered to ask them for fear of the responses. More often than not she found herself asking why she and Baron were wasting time dancing around with the idea of something more than friendship.

Once she crawled over the console and collapsed against the bucket seat, Baron reached above her shoulder and secured her seatbelt over her trembling form. Her breath hitched in her chest and she stared into his baby blue eyes.

“For what?” He cupped her cheek and it was one of the more intimate touches they’d shared. “I care about you, Patience. You know I’ll do anything to keep you safe.”

She couldn’t help but turn her face to his palm, nuzzling him. “Baron—”

“Don’t worry.” He dropped his arm abruptly. “I know my place.”

Wrought with guilt, she grabbed his forearm. She clung to him until she felt him relax. Then, she said, “You don’t know your place any more than I do. And I’m pretty tired of trying to figure it all out.”

“You have three hours,” Patrick told him, aggravation lingering in his tone.

“Three hours isn’t a lot of time, even when a man uses it wisely.” He disconnected the call and tossed the phone aside. “You’re beautiful.”

“Baron, you don’t have to compliment me all the time.”

“I don’t have to. I want to.” Didn’t Spenser and Mark tell her how pretty she was? Didn’t they let her know how extraordinary she was, how beautiful and sexy? “What do you propose we do with our time, Patience?”

“I still want to talk to Mark and Spenser.”

“Which is perfectly understandable.” Now would’ve been an appropriate moment to let her know precisely what he’d discussed with them, but for now, he was content to limit their sexual activities. He wrapped his hand around his cock and pumped his erection, pulling it up and down at leisure while admiring the hazy look in her eyes. “You don’t have to fuck me.”

“You?” He opened his hand, palming his erection. “Is this what you want?”

“But you want to talk to them.” He was ready to move beyond the Mark and Spenser discussions.

“Then stop this,” she said, her wet lips parting and her little tongue darting out long enough to sweep across them. “Because I’m not strong enough to resist you.”

She seemed surprised then but didn’t say anything more.

“I want you down on your knees, sub,” he whispered, deciding then how he would appropriately punish her. The rewards would come later, but for now, he wanted her mouth surrounding him, her cheeks swelling with his size.

“You want me to suck you off?”

His cock stood straight up with the suggestion. “Yes, sub, but you’ll ask in the most provocative way you can think of and if it doesn’t turn me on, I’ll spank you and when I do, you’ll know my hand is the one that’s been popping that sweet ass. You’ll wear my handprint.”

She grinned but quickly looked away.

“Surprised,” she replied. “You’ve never talked to me like this.”

Which he was starting to believe may have been part of the problem. “Do Mark and Spenser talk to you like this?”

She seemingly thought about her reply before she said, “No, they don’t. Not like this.”

“Like how?” She liked it. If he had any doubts, her tells gave her away. Her pink cheeks and moistened lips were telling but not nearly as much as those aroused nipples. “Tell me what you mean, sub.”

“It’s not necessarily what you say, but the way in which you say it.”

“And how do I say certain things?”

“I do want you.” He scooted to the edge of the mattress and parted his thighs. “And I want you to ask, sub.”

She stepped forward. “May I fuck you with my lips? Can I suck you off until you come, Sir?”

“You sure may,” he replied, motioning for her to drop to the floor.

Once she was on her knees, he dragged his tip around her lips, circling the shape of her mouth until his excitement was oozing from his tip. “Take your tongue across my slit.”

She slowly ducked her head and pressed her tongue to his tip. She dragged it back and forth over the moist head and he might have let her go down on him, but his damned phone started buzzing and ringing.

Her mouth widened and he placed one hand over his cock and the other at her chin. Dropping his lips to hers, he whispered, “I wanted you to know my taste so you can crave it. The next time you’re on your knees for me, I will have you here for a very different reason.” 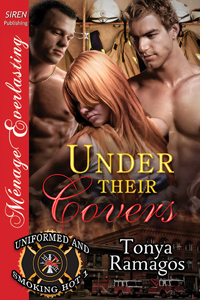