Little did Ben Randall know when hired Grace Traynor to design the décor of the main buildings of Paradise Ranch he would meet the dream woman of his middle years. Sure, he’s dated women over the years, but none of them turned into relationships. And Grace’s mature figure calls to him in a way that has every inch of his body standing up and taking notice.

The attraction between them escalates, and Grace worries it’s been too long since she’s been in a man’s arms. Can Ben ease her fears and convince her she’s exactly the sexy design he craves?

A goal he knew would not be easy to achieve.

“Let’s do one more walkthrough,” she said to him. “Make sure we’ve got the feel you want for the townhouses before we start on the first detached villa.”

Ben was sure she’d nailed it, but it gave him a chance to spend more time in her company. “Sounds good. Lead the way.”

He had to concentrate on what she was saying as they moved from room to room, mesmerized as he was by the musical lilt to her voice and the tempting sway of her hips.

He stopped, almost bumping into her as he realized she had paused and turned to him.

“Sorry. Did I miss something? I was just enjoying the feel you’ve created here.”

She laughed. “I don’t think you’ve heard a word I said. We’ve spent a lot of time on this today. I think you need a break.”

“What I think I need is a cup of coffee,” he told her. “Or, better yet, a glass of wine. Thistle Creek Winery wants to open a retail outlet in the first town center we’re building, and they sent over some bottles for us to try. Let’s see what they gave us.”

She took a step back, holding her briefcase tightly. “Oh, I don’t think so.” She made a show of looking at her watch. “It’s actually later than I thought. I should get going.”

“One glass of wine won’t hurt.” He winked. “To celebrate what we’ve done so far. Come on. I won’t take no for an answer.”

She stood there, frowning.

“Come on,” he urged again. “You’ve done a terrific job with the model townhouses. Kept right to the theme without being excessive in your designs. And I want to see what you have in store for the villas and the first clubhouse. The wine is locked up in the model we’re using as an office. We can sit outside and enjoy the late afternoon sunshine.”

He considered it a major accomplishment that when he took her elbow to guide her along, she didn’t protest. By the time they reached the offices and he’d taken down a bottle of cab, she actually appeared slightly less tense. He urged her outside where a small café table and chairs were set upon the patio. The air was heavy with the scent of new shrubbery and flowers and freshly mowed grass. There was no one else behind the row of townhouses, but in the distance he could hear the sounds of construction. The signs of the ongoing development always excited him.

Ben couldn’t take his eyes away from her graceful neck or the smooth movement of her throat muscles as she swallowed some of the wine. Jesus! He was besotted with the woman. That was the only explanation for it. Probably had been since the day he’d met her. 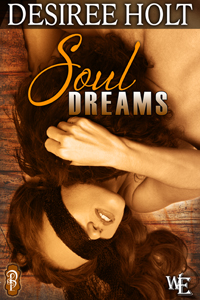 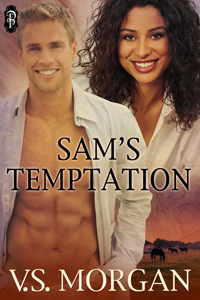 Double Down
Desiree Holt
In Shelf
$2.99
Tweets by
sirenbookstrand