Time is running out.

Lumos must survive a battle against an army of soulless Shadow Walkers and rescue Thalia from the hands of the Boars.

Will he return to Drakka in time to meet the final challenge and release the Dragonfae from the clutches of the dark Magus?

Or will he die trying? 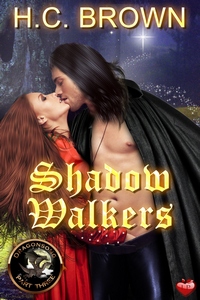 Thalia and Lumos are in the last leg of their journey to save his kingdom. After all that they have been through will a jealous ex lover be what finally breaks their new and tentative bond? The two continue to fight their way back to Drakka so that Lumos can fight for the kingdom. As the mage continues to hamper their return it only helps to strengthen their bond. I enjoyed watching their relationship continue to grow. Lumos loves Thalia and will fight for her in any way he knows how. As scared as Thalia gets at times she knows and believes in Lumos and his love. The two are a great couple and together nothing can stand in their way.

We may have come to the end of this trilogy but it is only the beginning of Lumos and Thalia’s story.

Not only did I enjoy watching Lumos and Thalia find their way but the secondary characters also endeared themselves to this reader and I hope that this is not the last time we get to visit this world. 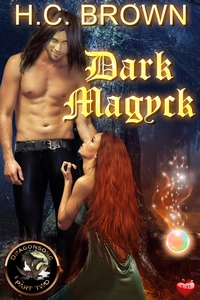 Thalia straddled Lumos’s lap and gripped Argos’s mane to avoid pitching forward. The pathway down the cliff face to the sandy beach below dropped away unnervingly. The narrow chalk trail beneath the horse’s feet crumbled at every step. Lumos curled his large hand around her waist, pulling her against the solid strength of him. Under her bottom, his coiled thigh muscles gripped the horse’s sides. She lifted her chin and drew in the clean delight of the salty breeze. Below, a stretch of white sand snaked away into the distance. An expanse of aqua ocean surrounded the island of Trill beside dense rainforests and untouched beaches with swaying palm trees. It would seem the realm of Trill bathed in the warmth of a tropical paradise.

Troubled, Thalia stared into the distance in fear of what the Magus of Fullmount might do to prevent their progress. She sighed and leaned into Lumos. How could evil lurk in such beauty, surely this place is ruled by Cymbeline? Blinking into the sunlight, she gazed at the beach and the knot in her stomach relaxed. Under a cloudless sky, white-capped surf pounded the shoreline, crashing in a spill of foam. The shore breaks rushed over the sand and turned to liquid silver in the blaze of the late afternoon sun. As the waves retreated, the wet sand glittered as if turned to the finest gold dust. She absorbed the beauty around her, and observed the gulls hovering on the thermal updrafts.How would it feel like to hover like that?

The steep pathway curled down to the sand. Her stomach dropped and she gripped Lumos’s hand. “I am a little afraid of heights. Do you believe I will be able to fly?”

“First, you must have wings.” Lumos nuzzled her neck. “Today, your ears have become most delightfully pointed, so the wings will come soon.”

She growled and pulled a face at him. “Oh, Lumos, of course, I know I must grow wings before I can fly.”

“I am teasing you, butterfly.” Lumos ran his tongue up to the tip of her ear. “We are all a little frightened of flying at first … but I will be with you, so you need not worry.”

She squeezed his hand and swallowed the lump forming in her throat. “I am more worried about your challenge in Drakka.”

“Then worry no more, little one. You have seen my dragon, he is very strong and highly skilled in battle. Indeed, he could fight two dragons of Kird’s age with ease. In truth, Kird is no threat to the Nightdragon.” Lumos shrugged then narrowed his eyes. “The Shadow Walkers are another matter. I must rely on my own skills and Pyro’s to defeat them. We are only two against an army of soulless creatures. This is why we must avoid this conflict, not because we lack the skill to fight them but because they will outnumber us by twenty or more to one. These are not good odds in any battle.”

In Thalia’s mind came the gentle voice of the Nightdragon.

“The Magus believes we are heading for the city of Tuntoch, so you must convince him of our destination. We will be traveling elsewhere. Pyro knows of a small village named Talltrees an hour or so from here. There is a tavern there to supply food and shelter for the night. Do not speak of Talltrees to Lumos but discuss Tuntoch and we will avoid the Magus’s meddling for one more eve. Lumos is aware of our conversation.”

She smiled and turned to look at Lumos. “How big is the city of Tuntoch?”

“It is the main trading city of Trill. The people here are a race called ‘the Boars,’ a tribe that deals in suffering and closely related to a race known as the Rams.” Lumos gave her a squeeze. He had immediately recognized her deception aimed at the Magus. “They run slave ships along the coast to the port of Tuntoch. There are slave auctions every day.”

She snuggled against him and inhaled the Fae’s delicious scent. Her stomach quivered. Goddess, she wanted to be alone with him. Her mouth watered at the thought of tasting him and sliding his cock against her tongue. The though heated her swollen nipples and they dragged unmercifully against the rough material of her shirt. She forced herself to concentrate on the conversation. “And the Boars, what are they like?”

“They are pigs.” Lumos’s breath hitched in his throat and he moaned then bent his head close to her ear. “I can smell your arousal. Gods, I am so hard for you, little one.” He lifted her shirt. “I am dying to suck these hard little buds.” He caressed her breasts with his rough fingertips driving her crazy with lust. “I want to bury myself deep inside that tight little ass of yours.”