Both stories in Gareth Vaughn's popular interracial fantasy gay romance series Shadows and Spell Light are combined together for the first time! Contains the stories:

The Officer and the Thief: Benen Trelayne has worked hard to make Assistant Detective by age 27, but protecting the city of Jewylle on Ilben is no easy job. When Benen removes a mysterious puzzle box from a murder scene, he isn’t expecting to have to deal with anything more than cracking the case.

But while attempting to stop a robbery, the curious box is activated, and Benen’s stuck trying to figure his way out of a puzzle spell with only a thief who calls himself Gus for help. Benen is sure Gus knows more about the murder than he’s saying, but can’t arrest him unless they can work together enough to escape.

The Doctor and the Addict: Graden Fallswenne has been struggling to kick his sugardream magic crystal habit, thinking if he does, he might just have a chance again with his ex, Evander. But when he finds the man has already moved on, Graden returns distraught to old haunts and habits.

He isn’t expecting to catch the attention of Dr. Louk Reeves, a man in a class Graden has been kicked out of. Louk is competent and is going places with his career, while Graden can barely take care of himself. Still, he isn’t about to pass up the chance to get his life back together when Louk offers.

Soon he wonders if moving in with Louk is just another of his poor choices. The doctor’s house is old and unsettling, the medical regimen difficult, and the nurse is competing for Louk’s affections. But when a ghost begins haunting Graden, he isn’t sure what he’s gotten himself into. 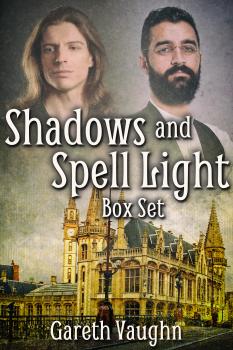 EXCERPT FROM "The Doctor and the Addict"

“There’s medicine for a lot of things. Now, how are you feeling today?”

Graden sighed and set aside his glass, still a third full.

“Like shit. Not sure I’ll keep breakfast down if I finish that concoction.”

“Choke down what you can, but the more you manage, the more it’ll help. I can’t stop you from leaving here if that’s what you choose, but I will be around if you need me for anything.” When Graden looked up at Louk quickly, the doctor smiled. “Anything but that.”

“I can’t help it,” said Louk, putting his head in his hands. “It’s been so long, and it’s all I think about when I’m not focused on the sugardream.” He wondered, briefly, why he was so readily admitting this, but if Louk had already decided not to sleep with Graden, there wasn’t much to lose. And he was beginning to think he did need to talk about it.

“So it’s nothing personal,” said Louk. He stood and moved to sit opposite of Graden, crossing his legs at the ankles, calm and comfortable.

“No!” Graden looked up, then caught and composed himself, looked away. “It’s ... I’m not interested in Patren. It might be. Personal. A little. You’re ... Why am I telling you this?”

Graden sighed, rubbed his head. He wanted to go back to bed and sleep, but he doubted he could get back to sleep now that he was up. Instead he reached for his glass -- if nothing else, he could punish himself with the foul taste. When he glanced at Louk, the doctor was smiling.

“It’s amusing?” asked Graden, suddenly angry at how pleasant Louk was being in the face of Graden’s desires and struggles. “That I’d want you?”

“Ah, no, sorry,” said Louk, wiping the smile away. “I don’t mean to leave you with that impression. I can’t help but feel strange you appear to be begging, like you aren’t a decent partner yourself.”

Graden snorted, let out a single sharp laugh. The pain in his nose gave him time to tug out the cloth before the bleeding stared, but he couldn’t keep himself from chuckling at that. Louk thought he was someone to long after? He doubted even Evander -- his longest, most adequate relationship to date -- had felt that way. Graden was standard, a bit boring. Unmotivated. And now, after the sugardream ...

“Have you had a good look at me?” he asked. “Even before the magic crystals, I was no catch.”

“Hmm,” said Louk, and tilted his head. He let the silence linger long enough for Graden to grab up the glass and choke down the last of the medicine. “I wouldn’t discount yourself so soon. Everyone I’ve met has something to offer.”

Graden stood, heart beating hard. Shit. This was why everyone liked this man, trusted him. He was so much more ... understanding than most people. Even a doctor who cared was so rare. And this was only going to make Graden want him more. What someone that responsive would be like in bed ... He went for the door. Shakily, but without needing to support himself on furniture.

“Graden,” said Louk as he rested his hand on the knob. Graden paused. “I do understand. It’s been long for me, too.”

Graden yanked the door open and left. He wanted to be frustrated alone.