Shadows on the Border (MM)

Sequel to Lost in Time

Newspaper reporter Lew Tyler and his lover, Detective Alec Carter, are working out the parameters of their new relationship. Meanwhile, time traveler Lew is trying to decide whether he wants to stay in the 1920s or find a way to get back to 2016, and Alec doesn’t know if he can bear the vulnerability of being in love with someone who uses such dangerous magic.

Fenn is a Hunter from the Outlands, come through the Border to search for the murderous Creature and its offspring at the behest of the Ternants, who maintain the balance between Fenn’s world and ours. Fenn strikes a bond with Sergeant Will Grant, Alec’s second in command, who is keen to learn more about his own magical abilities. As time goes on, Will grows keen to learn more about Fenn, as well.

Fenn has their own painful secret, and when they appear to have betrayed the team and goes missing in London, Will is devastated. He has to choose between following his heart or following his duty.

Moving through the contrasting rich and poor areas of post-First World War London from West End hotels to the London docklands, the men need to work together to capture the Creature ... and choose who – and what -- is important enough to hold on to and what they may need to give up to make that happen.

Shadows on the Border (MM)

More From Lost in Time

That cloud of gold around Fenn and Mira ... that was what Lew experienced all the time? It was both marvelous and terrifying. He knew, intellectually, that the only reason Mira was alive after being savaged by the Creature when it escaped in the winter was because she had been able, in some way, to Pull magic from the Border to heal herself enough to survive. It was completely another thing to actually watch it happening.

Her skin had changed under his eyes from an unhealthy grayish tinge to the radiant brown of a healthy woman. That was the thing that had been the most amazing and terrifying to watch. He was sure that other things had happened as well -- it was supposed to be a healing for her damaged voice, after all -- but that was the visual marker he had taken away.

If Fenn could do that, if Lew and Grant could do that, what else could they do? Over the last few months, Alec’s main fear had become losing Lew. But over the last week, he had also had moments of being scared of him as well as for him. His emotions were all mixed up and it wasn’t a comfortable feeling.

It seemed to Alec as if all the Workers surrounding him were in the dark about the limits and boundaries of the magic they used so blithely. Alec felt like a man trapped in a darkened room with dangerous things moving around him that he was unable to see to protect himself from. And the people he cared about could see the danger. But they didn’t perceive it as the danger it was.

Alec was angry. He was angry with himself, for not being able to see what the others could see. Were their lives always lit up like the hospital room had been downstairs just now? Why wasn’t Alec’s world lit up like that all the time? How come none of them had told him how beautiful it could be? Why should Alec be missing out on that when the people he cared about could share it? Just with each other. Not with him.

And he was angry with Lew. Lew had all this power. All these abilities. Why should he want to stay with Alec? When he could use all that beautiful golden magic to travel back to his own time, to a place where he wouldn’t have to hide that he wanted to be with a man?

Alec was angry with Grant. Grant had been his friend since Alec had come home from France in ‘18. They’d had an immediate bond. But Grant had failed to tell him that this other, ephemeral world of magic existed. And now Grant seemed to be obsessed with Fenn ... this fey, liminal creature who was able to act as a focus for all this power that flowed through the people Alec loved. And whose motives Alec didn’t understand and didn’t trust.

He allowed Max to steer him out of Miss Fonteyne’s room and to his office upstairs. It was a largish, comfortable room that doubled as a consulting room. Max guided him all the way with a hand in the small of his back, not allowing him to stop, opening the door with one hand whilst the other grasped Alec’s elbow and then steered him to one of the armchairs around a low table.

The room smelled of smoke -- Max had a predilection for obnoxious cigars -- and there was a brandy decanter and cut-crystal glasses on the table. As Alec sank in to the low chair, Max let go of him and reached for the brandy bottle. He didn’t bother to ask who wanted any, just filled five glasses with two fingers each and passed them out.

Alec watched as Fenn slumped into the armchair she had chosen. She tilted her head back and closed her eyes. Alec’s perception shifted. One minute there was the woman Alec usually saw Fenn as, sprawled in the chair, at rest. The next, a tall, elegant man with strong features and long lashes that fell against his cheek sat in the seat opposite. Alec blinked and the feminine Fenn he recognized was back again. He turned his gaze away and looked at Lew. 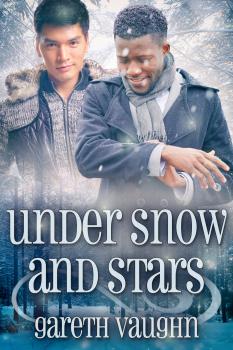