It’s love at first sight for rock star Colin Dunlow when he runs into sultry jazz singer, Jenna Lindstrom, with a few complications. The woman of his dreams hates rockers and there’s someone who wants him dead. 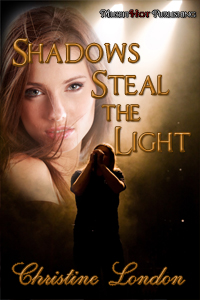 I really liked this one. And maybe it was because some of the plot points hit pretty close to home (no, I don’t think anyone has ever tried to kill me), but I thought that Christine London did a remarkable job with capturing the intricacies of emotional turmoil and struggle. -One Hundred Romances Project 4 stars

He heard the pop of a gun. Diving behind the mailbox bolted to the edge of the curb, heart racing in his throat, he rolled back into a crouch. The silver coupe had turned and was now coming at him along the sidewalk. He bolted across the street and ran, full tilt into a side street bordered by old twenties houses interspersed with more modern apartment complexes. Craning his neck for a brief backward glance, he spilled over the tire of a bicycle and into a row of similarly parked bikes outside the entrance to an apartment building. Tumbling onto the grass easement between sidewalk and street, he scrambled to his feet, looking for the coupe. It was turning the corner from 32nd Street parallel to the Shrine, onto his side street. Searching frantically for someway, something to slow the vehicle down, he picked up one of the bicycles, now flattened in a domino effect against the others and flung it into the street.

He looked back toward the approaching coupe: a maelstrom of jacaranda blossoms swirled in its wake as it accelerated toward him. He took off down the sidewalk again, this time not looking back. The centrifugal force behind the speed of his flight projected him out into 30th Street as he flew around the corner toward Figueroa. At an all out sprint, he dashed across the major artery, dodging the still clogged traffic exiting the Shrine toward the freeway. Running past Carl’s Junior, he headed for the overpass just the other side of Flower Street.

Shite. Who the hell? His mind raced on ahead of him as he pumped his arms in Olympic exertion. Having the green chain link mesh of the overpass fencing in clear view, he risked a glance back. The coupe was weaving around the cross traffic of Figueroa in perfunctory fashion, nearly clipping the bumper of a black SUV. Only one way out; he bolted toward the fence, leaping in upward propulsion, reaching for the top crossbar, propelling himself over with raw strength, determination and adrenaline.

His body slammed against the freeway overpass sign, dangling like the condemned from the gallows. Hands clamped tightly to the crossbar, teeth gritted, he lowered his chin to look below him. A catwalk of sorts, supporting lights for the sign, was but a few meter drop. He stole one more glance toward the street, just catching a blur of silver going north around the corner on Flower, toward downtown, the freeway flyover and against traffic. The metallic clunk and reverberation up his legs as his feet landed on the catwalk jarred him into a contracted crouch. Looking behind and down, he saw the rooftops of lethargic traffic scooting forward in preemptory battle to get ahead.

The unmistakable sound of large masses of metal being compacted came from the direction of Flower Street. An ivy cover fence screened any view of what had occurred. It wasn’t thirty seconds later, as Colin assessed the distance to the pavement, that he saw the form of a man catapulting over the ivy clad fence, leaping onto the overpass.

Head and face covered with a black ski mask, the identity of his pursuer was impossible to detect. Judging from the agility and muscularity of the man, Colin was in for some serious trouble. Damn! He timed his descent to coincide with the eighteen-wheeler passing under him. Pulling in a resolute lungful of air, he leapt.

The roof of the truck gave slightly with the impact of his weight. Its forward movement was slow enough, that it jolted him from his feet onto his knees, but did not propel him head over heels. Palms flat, he braced himself in anticipation of greater force. Shooting a glance at the receding over pass, he saw the darkly clothed athletic figure of the man in the ski mask land on a truck with a short red trailer, not two lengths behind him. Colin searched three hundred sixty degrees, twisting his crouched body to obtain the widest possible panorama of the rapidly degrading situation. His options were narrowing.

As the red truck moved forward, its driver signalled a lane change toward the left. Traffic was beginning to pick up speed as the effects of the merging onramp were diminishing. Wind now played a factor in not only his stability, but his ability to see as his long hair whipped about his cheeks and eyes. He moved along the roof toward the cab, remaining crouched to preserve what advantage a lower center of gravity might afford.
He felt, rather than saw, his assailant landing on the cold reflective grey of the truck’s roof; vibrating shockwaves caused by the weight of his body striking the rear of the trailer telegraphed through the metal like a seismic shock. Colin turned to see the man leaping across the long surface of the roof. Who is this…f**king Spiderman? Colin’s racing thoughts jumbled in an upset of twisted incomprehension as he tried to force his mind to cooperate through the serge of adrenaline-laced resolve coursing through him.