She and He and Him Box Set (MMF)

For Pete’s Sake: Sheila has always known her husband Pete is bisexual -- his attraction to guys is part of what attracts her to him in the first place. But since they've been together, he hasn't been with anyone other than her, male or female. She wants to reward him for being so loving and faithful ... and she'd be lying if she didn't admit that the idea of watching her husband have sex with another man turns her.

Swing Both Ways: The only guy Jenny is interested in is her coworker Eric, but even though he seems interested in her, he’s in a committed relationship with Mike. The way he flirts with her only makes matters worse. Does he like her, or is he only being nice? When they invite her along to a Halloween party, will she be a third wheel, or will she discover the guys swing both ways?

She and He and Him Box Set (MMF)

EXCERPT FROM "For Pete's Sake"

A few years after our wedding, we lay together in our bed cuddling and I asked him, "You married a woman --"

"And a sexy one, at that," he teased, easing a hand down my stomach to cup my crotch. We were nude, and comfortable with each other's nakedness in a way only seasoned lovers could be. His middle finger parted my pussy lips and rubbed my clit.

A zing of desire raced through me, and I snuggled closer to him. "So do you still think you're bi?"

The finger between my legs pushed gently, making me gasp. "Of course I am," he said. "It's the way I was born. I like both sexes."

"Who doesn't?" He rubbed my clit in a series of sensuous circles, each rotation driving my libido up another notch. "You can always tell me to stop, you know."

He grinned and kissed my chin. I turned towards him, and his next peck landed on my lips. Before he could pull back, though, I wrapped an arm around his neck and held him close. "That didn't count. Kiss me like you mean it, mister."

He did, his mouth pressing to mine as if he were dying of thirst and I was the only thing that could save him. His tongue dipped between my lips as he fingered the sensitive button between my legs. Now it was his thumb on my clit, and his middle finger slid along my wetness to slip into my cunt. My muscles tightened, drawing him in, as my lips crushed his.

When he pulled away, I didn't let him get too far. "So if you're bi," I murmured playfully, "do you miss dick?"

He shrugged against me, then ducked his head to kiss my neck. "I have you," he said into the hollow of my throat.

"I'm not exactly hanging, in case you haven't noticed," I pointed out.

He pinched my clit and I squealed with delight. "This will do," he joked.

Sitting up a little, I held him at bay. "No, seriously. Do you miss doing it with a guy?"

Pete rolled his eyes and extracted his hand from between my legs to roll onto his side of the bed. "Sheila," he said, drawing my name out in a long sigh. "Can't we just make love without talking about this? Please?"

But it bothered me that I might not be able to satisfy all his needs. I caressed his chest, my fingernails scraping lightly through his fluffy hair, and curled up beside him to kiss his jaw. "Petey, baby," I cooed. I could feel him relax beneath me, and my hand strummed down his belly to dip under the covers and find his cock. One stroke of my forefinger, and it jumped to attention. I toyed with it as I kissed his shoulder. "I'm just wondering if you miss fucking a man."

I gave him a sardonic look. "Baby, it's a rubber dick. You and I both know nothing compares to the real thing."

For emphasis, I gave his stiffening cock a squeeze. He bit his lower lip and moaned, his hand rubbing my back. But he didn't argue. He knew I was right. 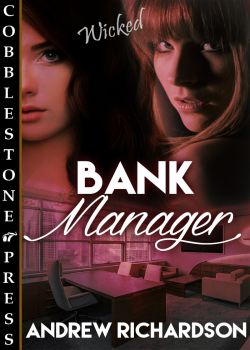 Not in the Game
Laura Tolomei
In Shelf
$4.99

Lady from Boston (MMF)
Jovana
In Shelf
$3.99
Tweets by
sirenbookstrand