Nine years ago, Cassian witnessed the assassination of his father, which left him to lead the desert clan. Growing up, he had relied on help from those around him; now an adult, Cassian wants to prove his own worth.

His first task -- securing the love of his bodyguard, Yashiv. Though the two have been inseparable since Cassian’s childhood, he fears Yashiv won’t let down his walls of propriety.

Then Cassian finds a child, the only survivor of the king’s caravan procession. Wen claims to be the bride for Prince Manoel, the ruler of the nearby city, but underlying currents of her story raise Cassian’s suspicions. 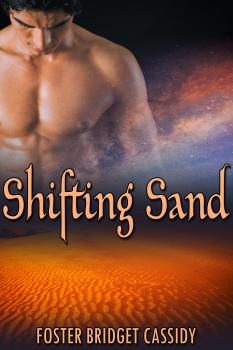 Yashiv nodded to Maarav and Uffe before letting the rug fall over the doorframe -- with him on the inside. Acid roiled in his stomach, a mixture of apprehension and anticipation. He turned to face Cassian and found Master standing just a few feet from him. He nearly stepped backward, to put more distance between them, but his legs wouldn’t move.

Cassian raised his bright eyes. The oranges and reds of the dancing fire reflected in his gaze.

“I learned something interesting today,” Cassian said, his voice low and soft.

Yashiv wanted to look away, to break the tension of their eye contact, but he couldn’t. Cassian’s gaze paralyzed him. “W-what was that, Master?”

“Maikoda assumes that you and I are lovers.”

Yashiv gasped in surprise. “What?”

“Master Tiago assumed it, too.”

“So I thought about it, and I realized that everyone believes it. The elders. Rafiq. Even Nenet and the kitchen helpers.”

Instead of listening, Cassian took a step closer. Yashiv smelled the heavy scent of Master’s lavender soap, fresh and clean.

“And I realized,” Cassian pushed on, “that they only believe that because I let them believe it. They see what I let them see. And all this time, Yashiv, I’ve loved you. That feeling is reflected in everything I say and do. It’s only natural they would catch on.”

Yashiv gulped audibly. Master loved him? No, it couldn’t be that kind of love. That was where this conversation headed. Master was saying the clan’s assumptions were all wrong, and Master must change the way he acted so people didn’t conclude that anymore.

“I can have someone else take over as your bodyguard,” Yashiv said, glancing away so Cassian wouldn’t see the hurt in his eyes. “That would stop the rumors.”

Yashiv felt warm flesh on the bare skin of his arm. He looked down and saw Cassian’s fingers lightly touching him. “That’s not what I’m saying, Yashiv. I’m saying that I’ve held back for so long, afraid of what the clan would think. Relationships like ours aren’t uncommon, I know, but as the Master, I would be expected to have an heir to lead after I’m gone. I thought the elders would be upset with me for acting on my urges. Don’t you see? They aren’t upset. They even accept you and listen to you as more than just my bodyguard. Even Vada today was content with speaking to you because she knew the position you hold here.”

“No,” Yashiv said, looking away again. “I’m an adopted member of this clan. The elders would not see me as worthy to be with you. It would dishonor you to be with someone as low as me.”

Master’s fingers left Yashiv’s arm -- his skin prickling at the sudden lack of heat -- and trailed up to his chest. They rested there, over his heart.