Emma keeps her Thoroughbred horse, Wisdom, at Blakewell Stables, where Ms Larimar is the barn instructor. But Emma has a major problem. Wisdom rushes his fences, which stands in the way of Emma’s ambitions to compete with him in events one day.

The other riders at the barn ask Emma and her wild horse to leave their group lessons. Emma is already riding on a shoestring and her finances are severely stretched by expensive private sessions with Ms. Larimar, yet Wisdom doesn’t improve and the instructor gives up on her. Enter horse trainer and television star, Jason Etaloni. Will Jason's knowledge and experience be able to reign in Emma's wild steed? Or will she be forced to put Wisdom out to pasture for good? 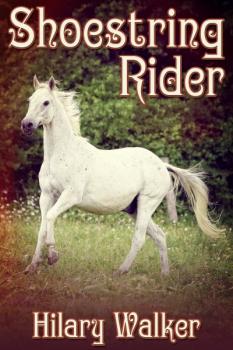 Emma asked Wisdom to canter. She sat as still as possible in the saddle, but when the little grey saw the fence, he launched himself at it as usual. After the jump it took Emma a few seconds to bring him back under control.

“You really must check him in front of the fence, Emma. That was awful!”

Emma swallowed the urge to suggest Ms Larimar try ‘checking’ the horse herself and see if it helped. As soon as he was lined up for a fence Wisdom stopped listening to his rider.

“Maybe you should use a stronger bit?”

Emma had thought about this, too. “What do you suggest?”

“I have a Pelham you could try. I’ll go and fetch it.”

There goes most of my lesson time!

Emma rode around by herself for ten minutes. Ms Larimar came back, bit in hand, and the switch over took another five minutes.

Finally they were ready. Please make this work!

“Canter a couple of large circles in the jumping position to get him used to the feel of it.”

Emma did as bid, being careful to balance herself on her heels and not catch her horse in the mouth. He seemed totally nonchalant about the change.

“Okay. Approach the fence with a relaxed yet active canter, and give a slight half-halt if he speeds up.”

At the beginning of the approach Emma was able to keep Wisdom in front of her leg, in a balanced canter. It felt lovely! She’d never had this feeling from him coming towards a fence. He really respected this bit.

Five strides out she felt him get strong, and squeezed the right rein to rebalance him.

The power died underneath her: Wisdom tucked his head into his chest and ground to a halt.

Emma was aghast. Her horse had never stopped before! She landed half-way up his neck, grateful that he at least stood still to let her scramble back into the saddle.

Ms Larimar was scratching her head. “Well, that was the last idea I had for helping you. You’re just going to have to accept that your horse will always rush his fences. “

Emma couldn’t believe it. She was just giving up on them? After everything Emma had gone through to find the money for her obligatorily private jumping lessons!

She wanted to cry. “Let me try one more time.”

Come on, Wisdom, please! She patted his neck and rode more determinedly at the fence.

This time she was ready for his stop.

Emma found it hard to hide her tears. Not only had her trainer not solved her problem—she’d made it worse! And Emma was expected to pay for her bad advice. She dismounted, handed a check to Ms Larimar, who didn’t have the decency to refuse it, and gave her back the Pelham.

“You need to get rid of that cheap animal and buy yourself a proper eventer.” Ms Larimar turned smartly on her heels and walked away.

“Don’t listen to her,” Emma told Wisdom, dismounting. “You’re a good horse and we’ll find a way to make this work.” She put her arms around his neck and cried into his soft coat.