When Kelly accepts an invitation to her boss's mother's wedding in Sicily, the last thing she expects is to fall for the groom, playboy Luca Amore. But that's exactly what happens. And she soon realizes the feeling is mutual as he can't seem to stay away from her either. Fighting their feelings is not easy, but for the bride's sake, they must.

As Kelly gets to know Luca better, she realizes he is nothing like they describe him. But when Luca's fiancée is murdered and he is the number one suspect, Kelly understands that he is much too dangerous for her to handle.

Mike stirred on the beach next to Kelly, rolled over, and began to snore louder. She glanced at him in dismay, sighed, and went back to her paperback, but the glare of the sun bounced off the pages and she decided to give it up and go for a walk. She pulled her sneakers on and picked her way along the edge of the cliff among the juniper plants, careful not to slip. She wasn't particularly fond of heights, but as she moved ahead, something down below caught her eye and she moved forward to get a better look.

A couple lay embraced on a large mat, their bodies in deep contrast, hers pale and his the color of burnt caramel. He was clearly a local, with a lean, powerful body. His black hair was drenched and fell over his face in soft waves.

He was also entirely naked.

And the woman was writhing in ecstasy as he slowly unbuttoned her shirt. She was clearly older than him, with a bob of silvery-blonde hair.

Kelly pulled back, her sense of decency scolding her. She knew many gigolos made their fortune world-wide on tourists, but pay a younger man for sex? Not her style. Who was she kidding? She couldn't even get a guy her age to kiss her.

But this place was so isolated. What if this gigolo strangled the woman and stole her money? It would be days before anyone found the body.

A prolonged moan made her take yet another step forward for a closer look. They were kissing deeply, his hands roaming over her hips, bringing them closer, as her fingers tugged on his hair in response. Nope, he was definitely not murdering her. He gently pulled her up so they were seated facing each other. Without interrupting their kisses, he pulled her legs over his thighs so she was straddling him. They gazed into each other's eyes as he slowly brought them together, his kisses so passionate Kelly forgot to breathe.

Her cheeks on fire, she decided to turn and go for a real walk this time, when the man whispered something that made the woman moan even louder. Kelly rolled her eyes. She couldn't believe she was spying on someone else's sex scene. She also couldn't wait to tell the girls at home! And maybe find a substitute for Mike. Although not necessarily someone this handsome—she was flexible. Speaking of flexible, the man seemed to be made of rubber, tilting and swerving to impossible positions. Kelly's head bent to one side as she studied his technique. How could he even manage to do that?

Even if it turned out that this woman was found dead tomorrow morning, she would have died a happy cougar. But how on earth could Kelly ever justify such a detailed description of them to the police? Oh, yeah, I saw them very clearly because I was taking notes and making diagrams?

It was the murmur of his soft, urgent whispers that kept Kelly glued to the spot, straining her hearing. This was going on forever! And yet, mesmerized by the most ancient dance in the world, she watched as he caressed the woman's body and clutched at her hair, snapping his hips rhythmically. Kelly could feel every delicious chill running up and down her spine with each thrust of his pelvis.

Now try and beat that, the couple seemed to say to her, and Kelly realized her heart was pounding. She would have given anything to be in that woman's place.

When it was over—and Kelly hadn't missed a minute of it—the Sicilian pulled the woman against his chest and murmured something that made her laugh as she snuggled up to him. His eyes were closed against the glare of the sun, but his mouth opened in a wide smile, nearly blinding Kelly. He was so tempting, so mesmerizing, like a snake—no, the devil in the sand.

"Hey, Kelly, what are you looking at down there?" came Mike's voice from behind her.

She froze and turned to look at him over her shoulder as the couple started and looked up. Aw, hell…

"Oh my God!" the woman gasped, her face whiter than her gaping shirt.

Mike glanced down and took in the scene, his eyes widening in horror as the woman stood in shock. The Adonis was calmly pulling his shorts back on. That's a shame.

"Nothing like a bit of local color," Kelly attempted to joke as Mike opened and closed his mouth several times, unable to articulate the word properly, although it should have been easy to say, given that it's usually the first word one learns. 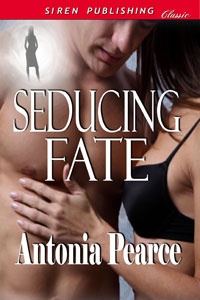