Signed with a Heart

Leo, a cheetah shifter, knows he will be married off to a man of his parents’ choosing. He won’t have any choice in the matter. When his father informs him Antonio will be his mate, he doesn’t exactly like the man, but is determined to make the best of it. Knowing he’ll be cut out of the life he’s known before, he wants to go from Spain to Washington state so he can have a last few days with his best friend Cam. But Cam and his mate are out on vacation and Leo finds Taruk at their house instead.

Taruk doesn’t exactly understand the recent trend in the elk herd he belongs to toward having arranged marriages, but he’s not overly worried about it, since he’s not high on the pecking order. After seeing how happy his best friend Jenner is with his mate, Cam, Taruk wonders if it’s not so bad. When Leo shows up while he’s house sitting, he responds to the fear and sadness emanating from the young cheetah. The two are drawn together only to be torn apart when Leo’s promised mate arrives and takes Leo away.

The two struggle with the feelings their brief encounter has awakened. Then when disaster strikes, only that new love is enough to hold them both together.

Signed with a Heart

Leo sat in a hotel room in Spain with a glass of sangria, which was mostly just juice and fresh fruit, in his hand, as he looked out over Madrid. He shivered despite the heat and wished he could call Cam and talk about what was going on. But this was only to be a meeting, and he didn’t want to worry his best friend. Across from him, a bodyguard stood watch. Maybe to make sure he didn’t run. That was what Leo was assuming anyway. It made sense. But Leo wasn’t about to run, because this was only an interview with a potential mate, not an actual mating. If his father liked the man he had picked out, and if the man’s pockets were deep enough to please his father, then the mating would be arranged. But that would not be happening tonight. And so he sipped his sangria and looked out over the city. It was a very pleasant view, and the lights helped take his mind off things. Overall they reminded him of other cities he’d visited with Cam, places like Rome, London, and Rio

His father opened the hotel room door without knocking, and Leo turned to him. He was scowling, but Leo hadn’t done anything wrong that would warrant his father’s sour expression. Not lately, anyway. There was plenty he was planning to do, though. Sometimes he wished he could be the good son Cam had been before his mating, but as much as he tried and as often as he was reprimanded, it did little to settle his innate wild nature.

Leo looked down at the glass in his hand, and at the red liquid within it. “I am.”

“It’s only half past noon!” his father scoffed.

He sighed and put the glass aside. He wasn’t drunk. He wasn’t even buzzed. He’d only been drinking so he could remain calm and placid as they met with yet another potential match. Maybe this man would be the one. Probably not, though. His father always seemed to find something wrong with the men who were interested in him, and it usually had to do with the amount of money they were willing to pay for him.

“It’ll be fine,” Leo told his father as he got out of the chair he’d been resting in. He stretched his arms over his head. He’d been ready for hours, but Antonio apparently hadn’t been. So he’d waited, patiently, for his father to come get him. “I suppose we’re going to his room then?”

“You are,” his father confirmed.

Leo frowned. That hadn’t happened before. Whenever he’d met with his perspective mates, his father had always been there to accompany him and oversee the meeting. “Why am I meeting him alone?”

“Because I’ve just met with him. I approve. All that’s left is for you to meet your new mate. Your mating will take place a month from now, here in Spain. I suggest you hurry up. And also that you put a smile on your face. You need to pretty yourself up a bit to impress Antonio. At your age, just being a virgin won’t do it for these men anymore.”

Leo’s heart sank as his stomach twisted into a tight knot. “I see,” he said darkly. He felt betrayed and tricked, but there was nothing he could do about it. He just had to go meet his mate-to-be and get this over with.

“Remember to smile!” his father called after him as he headed toward the door. “He’s two doors down on the right. Make sure to knock.”

Leo nodded to his father and walked out of the room. With a heavy sigh, he straightened his back, squared his shoulders, and lifted his chin as he walked down the hallway. He was a cheetah—lean and fast and absolutely powerful. He didn’t want to show his fear or his nervousness at meeting his mate, but it was nearly impossible for him to hold his expression in check as he knocked on Antonio’s door.

The man who opened the door, one who was at least a decade older than him, didn’t give him a smile. He gave him an assessing once-over before bringing his gaze back to Leo’s face. “Turn around. Slowly.” 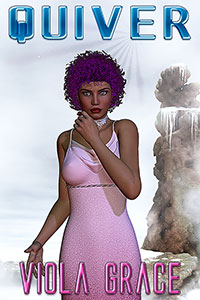 Delivered to the Boys
A.J. Marcus, Caitlin Ricci
In Shelf
$4.99
Tweets by
sirenbookstrand