Sinati and Druid are two entirely different beings--with a common goal. First and foremost is stopping Caedion, a power-hungry wraith, from taking over their world and destroying their people.

Thrown out of their world and dimension, the Scythian and the Myrian, last of their race, struggle to find their true status in life and with each other. 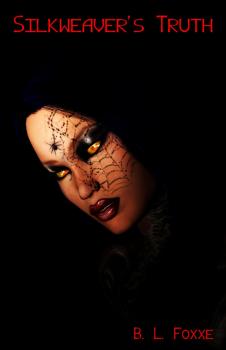 Druid was furious when he rammed into something delicate, silken and so tough he couldn't cut through. He remained still, after shouting twice to be heard. Druid kept from thrashing about, though it was something he wanted to do instinctively. However, he knew it would be disastrous.

He suspected there were other reasons, but he didn't want to find out right then. Instead, he concentrated on becoming fully back to normal and hoped that whoever cast the damn net would free him from it. Otherwise he'd become waterlogged, and he really didn't like it when that happened. Bad enough that he'd not tended his wounds while still dry. Hopefully the burn wouldn't become too bad before he got out of the water.

He hadn't been submerged for that long in human form, so the change took little time. His eyes searched the shore while he shouted intermittently and fought to keep his head above water. Druid had nearly drowned twice when he spotted a figure running toward him from the caverns. He closed his eyes in shock and fury when he realized who had set the damned trap.

Man, he hated it when he got stuck in embarrassing situations like this. With an irate sigh, Druid waited patiently for her to get to his side. Later, he would likely remember it as a funny tale. Now, though he just hoped he wouldn't die from too much water entering his bloodstream, especially saltwater. He grimaced at the logy feeling he gained whenever the stuff got into him, and wondered why saltwater affected him the way it did.

"You." Exasperated, Druid glared at Sinati with mingled irritation and lust. "I might have known that you were the net weaver."

For a moment he lay on the ground as he regained his strength, watching her with mingled respect and appreciation as she pulled in the net, fighting the waves that would drag them all back into the depths of the sea.

With swift tugs of particular strings, Sinati loosened the net, freeing him. "You really pissed someone off out there," she murmured.

"Yes, I did, but then again, I always do. This time I think it was Zeus." Druid played along with her while he waited for his muscles to relax so that he could get to his feet. He looked down at himself to make sure he was back to his original form. All seemed well, from what he could see, though his sodden clothes covered most of his frame.

"No, it was the god that controls the seas, Poseidon. You were lucky he didn't get you." Sinati cast a jaundiced eye towards the ocean. "We'd better get moving. The cavern I picked won't get flooded. You can walk?" Sinati bit her lip.

Scowling at her, Druid growled beneath his breath and responded politely, "Yes, I can walk." His mood turned ironic as he realized she was teasing him. "Thank you for offering to cart me around, though."

Druid watched her hide a smile behind one of the veils that partially concealed her features, and finally got to his feet. "Please do lead the way." He watched the silken, fluttering cloth wrapped around her body, both concealing and revealing her curves. Druid thought it was surprising that she could wear such garments and still walk easily.

Sinati ignored his appraisal for the moment.

"I take it you're prepared to bed down for some time in here?" Somehow Druid was not surprised. It smacked of her usual tendency, since she could hang just about anything from the different corners.

"Good, otherwise you won't survive what the gods have planned around here." Druid swiped an arm over his face, grimacing when the salt burned into his skin deeper than before.

She shrugged, as if wondering when he'd get to the point of his chatter.

He was sopping wet, while she, on the other hand, was bone dry. Sinati frowned at him. "Come to the fire." She headed for the small fire she had started earlier.

Druid felt a strange prickling at the back of his neck when he stared at the dazzling tapestry on the wall. "Is this the legendary statue of Zeus?" He was thinking of Kyriakas' so-called boss, and the fact that he'd never met him. Talked to him through a mental link, yes, but actually saw him?

"Well, yeah, what it originally looked like." She was watching him as he examined it.

Hearing the note of unease in her voice, Druid turned, noticing her eyes glittering warily at him. "Why do you still wear the veils of the temple?" He approached her with a puzzled frown.

"I chose to wear them out of habit." Sinati answered his question testily. She paused, checking on the food.

Druid sniffed appreciatively. "What can I help you with?"

"You can place the pieces of rock onto the fire. They'll heat up a wee bit and we can use them for dishes." Sinati smiled at him, but still kept out of his reach.

A smile curled his lips when he observed her graceful movements. Druid realized he rattled her more than she wanted to admit. "So where did you vanish from, Sinati, that I couldn't find you back in our world?" Druid observed her pausing her actions at his question, grinning at the look on her face.

Before she could answer, Druid frowned, his body stiffening. His head canted to the left as he listened.

After a time, he leaned over, kissed Sinati full on the lips and muttered, "I'll be back. We haven't finished talking, and I think we need to clear the air."

Sinati blinked and kissed him back just as hard. He savored her taste, dragging her into a corner and pulling her arms around his neck.

Sinati gave him a questioning stare. He didn't want to let go. She shivered as his hands roamed over her, prying his shirt open to touch his smooth chest.

Druid looked down nervously, then stared at his body with relief, his dark, ebony-moss-hued skin having returned to normal. He looked at Sinati, then kissed her neck with nipping teeth. "I hate to end this, but I really do need to find out what those voices are all about."