Sins of the Servant's Wing - Part 1

When, in a sequel to the novel “Sins of the First Eleven”, Michaela Francis, the author’s eponymous heroine of St Margaret Clitheroe’s Catholic Girls’ Boarding School reports to Castlebridge Hall for a work placement at half term, trouble is almost bound to follow. She has barely set foot in the Hall before she is ordered to the library for a salutary caning over the venerable caning stool. From there, things only get worse.

Pressed into service as a maid, Michaela is confined to the Hall and, prescribed a regime of strict discipline under the gimlet eyes of the Hall’s butler and Head of Housekeeping. Furthermore she faces another thrashing should the academic work she presents to Lord Castlebridge be less than satisfactory, she comes to the unwanted attention of the lecherous Marquis of Stansbury, falls afoul of the awful Priscilla Armstrong and becomes involved in a complicated amorous affair with one of her fellow maids. Most ominous of all, she attracts the notice of the beautiful and Machiavellian Lady Castlebridge with the prospect of becoming embroiled in her labyrinthine plots.

This then is the first part of Michaela’s hilarious misadventures at Castlebridge Hall in a fusion of two of the author’s loved series. Told in her own inimitable words, our irrepressible heroine leads us into a startling and engaging account of a maid’s life at Castlebridge Hall; sexy, intriguing, funny and completely crazy. For all those who have enjoyed the Castlebridge Hall stories and the St Margaret Clitheroe’s stories, this new episode is a must. 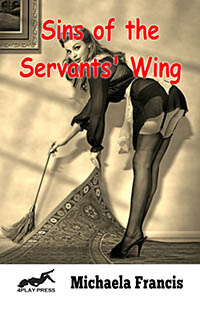 Sins of the Servant's Wing - Part 1

Well I was late and, to be frank, I didn’t have a very good excuse for being so or, at least any sort of excuse that was liable to satisfy sceptical butlers with a length of cane in their hands. Perhaps I am doing the vocation of butler a disservice but I can’t imagine that a man who makes a career of looking down his nose disapprovingly at unwelcome guests is a man whose sensibilities are likely to be moved by a tragic tale of youthful love and broken hearts. I might be wrong of course. There may well be some butler, somewhere, who spends his leisure hours closeted in his pantry dabbing tears from his eyes over a volume of romantic literature. If such an unlikely scenario had ever come to pass, however, then I am as near as damn certain that it wasn’t at Castlebridge Hall and did not involve the magnificent personage of Thomas Greenwood, butler of that establishment. The reason I was late, you see, was simply because I had tarried on the way, being inflicted with the painful pangs of love lost. The previous day, my Priya, my beautiful, brilliant and darling Priya, had ended her stay as an exchange student at St Margaret’s and shipped off back to India, leaving my heart hanging out to dry. To say I was devastated would be to put it mildly and it had driven all sensible thoughts out of my head. I had set off that morning for Castlebridge Hall under a cloud of gloom and despondency so thick it might well have featured in the local meteorological reports. I had had to change buses at some God forsaken little market town and, feeling quite unable to continue my journey without a cathartic break down, had paused for a couple of hours to take a later bus and to spend the interval feeling sorry for myself over a glass of wine in a pub’s beer garden.

Now a sensitive and empathetic person might well have considered those to be justifiable grounds for a lack of punctuality but a flipping great butler was unlikely to be one. A butler would have simply regarded me with the same distaste he might accord a blemish in the dining room silverware and intoned, “I see Miss Francis. If I am to understand you correctly, therefore, you felt it unnecessary to comply with His Lordship’s instructions regarding your arrival on the grounds that your girlfriend has dumped you and gone back to India. I fear His Lordship might regard that as less than adequate by way of an excuse I fear.” So I didn’t even think about pouring out my tales of woe and lament to this particular specimen. Instead I mumbled some feeble whimpering about poor bus services and uncertain connections and ended up sounding either like a poor equivocator or just plain stupid. Either way, the butler seemed deeply unimpressed and indicated his lack of impression by raising an eyebrow and tapping his cane against his thigh impatiently. I noticed a peculiar physical phenomenon at this point… the more unconvincing my excuses became, the bigger that butler seemed to grow and that from a stature and body mass that was already pretty imposing. What is it about sodding butlers that demands intimidating size and imperious authority? Is it part of the bloody job description or something? I mean when was the last time you ever heard of a butler described as medium sized and nondescript. They’re nearly always afforded such adjectives as, magnificent, imposing, stately, aloof, grandiose, pompous and so on. I mean what is it about English stately homes that requires them to have their doors opened by somebody who would scare the shit out of any visitor unfortunate enough to knock on them? Well I don’t know but, and you can take it from me, the specimen at Castlebridge Hall could pretty much be the original prototype for the model butler. Having said that, it must also be noted that Castlebridge Hall was the sort of edifice that demanded nothing less of its butlers. On my laborious journey through Southern England, I had been harbouring ever increasingly hopeful fantasies that my final destination would be somewhere modest, perhaps even a little cosy and quaint. My first view of Castlebridge Hall had dashed all these hopes to ruin. You stepped through a set of gates the size of the lock gates on the Titanic’s dry dock to face a tree lined drive, fully half a mile long, at the end of which loomed the terrifying bulk of the Hall itself. Now I’m not much of an authority on English stately homes but even I could discern that this was a pretty spectacular example of one. It wasn’t spectacular from any point of architectural beauty you understand. In fact had not age and the best endeavours of creeping vines contrived to impart a certain character to it, you would have considered it a blot on the landscape. The front facade was essentially an enormous great granite cliff, topped with decorative crenulation, which, had it been placed by the sea, would doubtless have boasted a nesting colony of gannets. There was an enormous great, square clock tower emerging from somewhere amidst its structure and the front door was a massive portal, atop a pair of balustraded curved stairs and surrounded by neo-classical Grecian stone pillars, that nobody with less than a peerage to their name would dare pass through. I hadn’t even thought about walking up and knocking on the front door. Instead I’d navigated my way around the side of the Hall and wasted more time becoming lost among assorted wings and extensions in search of a servants’ entrance. I had finally run some young maid to earth who, in turn, had passed me on to some lady I took to be the Head of Housekeeping. This woman had apparently never even heard of me and so she passed me along up the chain of command to face this butler. It was clear that my first impressions on this butler were leaving much to be desired. After I had finished muttering my entirely inadequate excuses, he sighed deeply in intense dissatisfaction. “I see Miss Francis,” he rumbled ominously. “However, if I may be permitted to offer advice, I suggest that you save your pleas of mitigation to utilise in explaining your tardiness to Lord Castlebridge.”
I swallowed nervously. “L… Lord Castlebridge?”
“Yes Miss Francis. His Lordship, I’m afraid to say, has been growing increasingly concerned about your failure to arrive at the appointed hour. Indeed, when I spoke to him less than half an hour ago, he expressed the fear that something may be amiss. He gave me explicit instructions to present you to him, the minute you arrived. I am sure he will be most interested in hearing how a favoured protégé, for whom he has high hopes, has proved herself entirely incapable of following a simple bus timetable. Doubtless he will have much to say on the subject and will address the matter in detail once he has assured himself that you have arrived safely. If you would care to leave your bags here for the time being and follow me, I shall take you to His Lordship.” 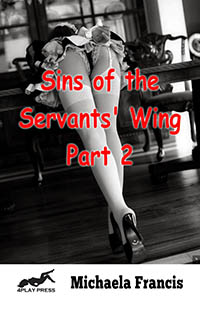 Sins of the Servant's Wing - Part 2
Michaela Francis
In Shelf
$6.95
Tweets by
sirenbookstrand