Caleb's Choice: Caleb Dodson has lived and breathed baseball most of his life. Playing in the Minor Leagues means he’s close to his dream of being in the Majors, and he doesn't want anything to mess that up. That means keeping his attraction to men a secret. But when new announcer Lucas Landry arrives at the stadium, Caleb falls hard and fast. Maybe it’s time for Caleb to figure out just what that dream is.

Eggplant Highlights and Mustard Yellow Jeans: Seth Robinson manages a local kitchen boutique and has his eye on sexy customer Chris Berger, but he’s too shy to start a conversation about anything other than kitchen gadgets. When they finally do get together, they are both dealing with a lot of changes in their lives. Are they strong enough to work together and find their happily ever after?

Evan's Fantasy: Evan is crazy about his roommate's best friend, Nick, but keeps it secret. When he's caught in a compromising position, moaning Nick's name, the cat's out of the bag, but it turns out Nick wants to play. Two sexy men share an unforgettable night of passion as Evan's fantasy becomes reality.

Motorcycle Man: Biker Ben Makowski is irritated when a student in his latest riding class doesn't even like motorcycles. Ben can see the man, Angus Winter, is dealing with something painful, and sets out to find out what it might be. Angus Winter is a writer and must learn about motorcycles for a book. He's afraid of bikes, but his sexy new teacher makes him want to reveal his burden and begin to heal.

Officer Charming and the Prince Who Wooed Him: Officer Chad Charming does not believe in love at first sight, or even true love. When Jeff Garner’s horse kicks him and he lands in the hospital, he is furious. When Jeff announces he believes they’re meant to be together, Chad tells him that it can’t be. While Chad recovers, the two men become close, but can Chad ever get past the idea that love isn’t real and allow himself to love his Prince?

The Great Pretender: Billy loses control of his vehicle on the way to the diner and ends up alone in a ditch. Will the sexy mechanic in the black leather jacket come to his rescue in more ways than one?

Bonus content! Read the first chapters of Sarah's novels, Holding On and The Promise of Hope Shelter, included in the back of this edition! 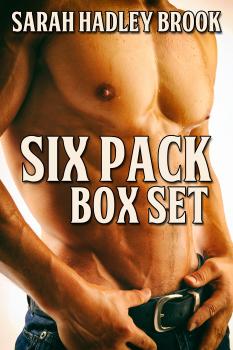 “I mean, according to my boss that’s what happened,” Lucas confirmed. “Anyway, they asked me to fill in for now.” He felt the blush begin to creep up his neck. What he had to say next was embarrassing and he was pretty sure they would be less than kind about it. “So, um, yeah. You might have noticed today that I ... I know very little about baseball. I was lucky to have some help in the press box today, but I need a crash course in baseball.”

Silence blanketed the room. For about ten seconds.

“How are you going to report a freakin’ game?”

“Are you shitting us?”

Lucas felt his face redden and he stared at the ground for a moment.

His head whipped up. Was that Caleb? Had his voice sounded like that earlier?

Caleb was staring directly at him. Lucas suddenly felt exposed as Caleb’s gaze deliberately dropped to his lips and then back up to his eyes. What the hell? Was he teasing him? Great. All he needed was some straight jock to start messing with him.

Lucas bit his lower lip, aware that everyone was staring at him. Think, he yelled inside his head. You can’t spend time with him. He’s too hot. And he’s a jock. Historically, he and jocks had never gotten along too well. But they were all jocks and he had to learn from someone.

“Thanks, Dodson,” Coach Newberry said, breaking into Lucas’s thoughts. “Touch base with Lucas here and then go home. That goes for everyone. Go home, get some rest. Be ready for the game tomorrow evening. I want you all here ready to work hard and have a good attitude. We’re not off to the best start in our series with the Lions.”

The manager, whose name Lucas had already forgotten, stepped up in front again.

“I expect my players to follow curfew, stay away from alcohol, and get rested. Now go!”

Lucas watched as the men all began talking and standing at the same time. It was chaos as he watched them all. His eyes scanned for Caleb, surely somewhere in the crowd, but he couldn’t find him. He sighed. Looks like he would have to try and talk with him tomorrow.

When someone tapped his shoulder he nearly jumped out of his skin and whirled around.

Lucas felt the blood drain from his face as he searched his brain for something to say. Anything. Really, he begged himself, anything at all!

“Sorry,” he said, not wanting to look him in the eye.

“Hey, I’m sorry, man. I won’t do that again. Promise.” Caleb crossed his heart and smiled at him.

Fuck. That smile did things to him. Lucas sensed trouble in his future.

“So, you want to start tonight?”

“Yeah. Unless you have something you have to do. I mean, we have a game tomorrow and you were a little hard on us out there today. You definitely need some tutoring.”

“Hard on you?” Lucas asked incredulously as he looked around the now empty locker room. “You think I was hard on you?”

Lucas threw his arms up in defeat. “For your information, this was one of the worst days of my life. I hate baseball. I hate sports in general. And I really hate jocks!” He knew he was losing his cool, but damn, he hated having some stupid jock think he was an idiot and was hard on the team because he just didn’t understand the game. “For your information, I was hard on you guys because you kept dropping the damn ball! You let the Lions destroy you!”

Caleb stared at him for a minute with those soft blue eyes. He looked ... confused.

“What?” he barked at Caleb, exasperated.

“How can you hate baseball?”

Lucas stared up at him. “That’s what you heard?” He rolled his eyes and pushed past Caleb. “I’ve got to get going. We can start tomorrow,” he huffed out as he strode across the locker room and out the door.

The Dragon Takes What's His (MM)
Marcy Jacks
In Shelf
$3.99
Tweets by
sirenbookstrand