CJ is a skateboarder who would rather spend his days boarding or customizing his deck and can't seem to hold onto a job now that he's officially "grown up" and graduated from high school. He lives with his lover, Richard, who wears a suit and tie to the office every day. Together they make an unlikely pair.

This story is a snapshot look at their relationship, how they come together and how they stay together despite society's negative attitude towards CJ's skating. Sort of a "day in the life" type of story, it follows CJ from a good dream through to convincing Richard to stop working long enough to meet for lunch.

Joyfully Reviewed:
"Richard and CJ are great guys. I wish Skaterboy were a longer story."

Rainbow Reviews: 4.5 out of 5.
"This story is sort of like a piece of watermelon, just a slice of their lives, with a few seeds thrown in, but mostly sweet, and firmly held together at the edge by the rind."

CJ liked the way Richard's sports coat looked pushed back behind his wrist. The fuzzy brown hair that covered the guy's cheeks and chin, a contrast to the receding line above his brow. The wire-frame glasses that made him look smart. And the way Richard glanced around the lot uneasily, saw him with his friends, looked at the gas pump and then looked back again. CJ had never gotten a second glance before, from anyone. That right there won Richard his heart.

He got a third look when Richard went inside to pay for his gas. On his way back to his car, CJ skated up behind him. "Hey," he called.

Richard turned immediately. "Excuse me?" he asked. His gaze danced past CJ to the other boys along the front window of the store, backlit by the lights inside, and for a brief second fear flickered behind those thin glasses he wore. This close CJ could see his eyes were a pale blue, like faded denim or the endless summer sky on a clear day. Sexy eyes. He wondered what they looked like without the lens refracting them, first thing in the morning or late at night. And he was staring, had to be, because Richard cleared his throat and asked, a little perturbed, "Yes?"

With a nonchalant shrug, CJ pointed past him and said, "I like your car." A BMW because Richard is a bang-up salesman, though CJ didn't know that at the time. It was an older model but still in top condition, shiny like wet latex in the overhead lights. Impressive really, even to someone like CJ who wasn't easily impressed. "I'm CJ."

Behind CJ his friends laughed, a childish sound in the empty parking lot, and CJ half turned to hiss at them, "Shut up." They were cramping his action here.

Richard glanced at the boys by the store, then back at CJ. The way he looked him over made every drop of blood in his body rush to his dick, and his baggy pants felt two sizes too tight when Richard's eyes met his. "How old are you?" he wanted to know.

Richard frowned -- CJ looks a lot younger, he knows he does, he still gets carded buying scratch-off lottery tickets. "You sure?" he asked. When CJ nodded, Richard started, "If you're shitting me --"

"I have my license," CJ offered. He dug into his back pocket to extract his wallet, the one he wears on a chain not so much to be cool but so he won't lose it. All of a sudden he wanted Richard to believe him, more than anything. I'm old enough, he thought, scrambling through the folds of his wallet, past movie tickets and business cards and receipts, crap he stuck in there and promptly forgot. "If you want to see it --"

"I believe you." Richard took a step closer and the boys behind CJ snickered. Looking over his shoulder, he saw his friends for the first time as the rest of the world did -- a bunch of rowdy boys looking for trouble. Skaters dressed in sloppy clothes with bad haircuts, kids screaming for discipline, headed down the wrong road of life. At that exact moment, he hated them.

Fumbling with his wallet, CJ tried to extract his driver's license but his fingers trembled and refused to work. His eyes stung, his throat burned, he wanted to take his board and go home. "Damn it," he muttered, yanking at his license. The thin plastic was caught in the billfold and he couldn't seem to get it free. His friends' laughter only made things worse. Beneath his breath, he mumbled, "You know I need to ditch them, right? I'm not ... this isn't really me ..."

A warm hand closed over his, and CJ blinked back tears of embarrassment as he looked up at Richard. Surprisingly, the guy was smiling at him, CJ couldn't imagine why. Unless he was laughing, too. But then, in a soft voice, he asked, "Want to go for a ride?" When CJ didn't reply, he winked. "Don't worry. I won't do anything you don't want me to. You said you liked the car?" 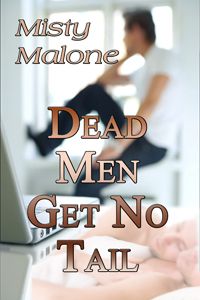 Dead Men Get No Tail
Misty Malone
In Shelf
$3.99