For more than a hundred and fifty years, the gray wolf has failed to roam the hills of Massachusetts, leading to the belief that they are extinct. But with a spattering of sightings across the Berkshires, the legend of the gray wolf comes to fruition. The product of that legend, Micah Sloane will go to great lengths to protect his kind from the threat of outsiders, who seek to exploit the legend for their own interests. One thing he didn’t count on, however, was finding his soul mate in the company of such men.

From the first time she predicted a stranger’s imminent death when she was little more than a child, Shiloh Beck knew she was different. Wishing to cultivate her gift, her parents made the fateful decision to enroll her in a private school for paranormally gifted children. Unbeknownst to them, the school was just a front for a research facility simply called the Institute, whose secret board members weaned gifted children from their families to exploit their gifts. Shiloh has spent the better part of her life trying to escape the Institute and reunite with the family she was told had abandoned her.

From their first meeting, Micah and Shiloh share a connection that goes beyond the normal to bond them in a way that love alone cannot. But before they can build a life together, they must deal with the fall-out when the legend of the wolves collides with the men behind the Institute. 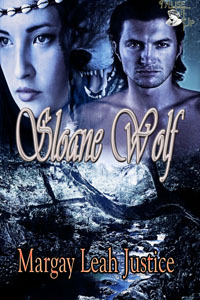 "No hiking trails where you live?"

Another odd expression crossed her face then, and once again, quickly masked. She favored him with an ironic little smile that zinged straight to his heart like Cupid's proverbial arrow. Damn, he was treading on dangerous ground here. If he were smart, he'd put an end to this nonsense and some distance between them. If he were smart.

"No," she murmured, looking ahead once more, "no trails where I live."

Not exactly? How could you "not exactly" live in the city? Micah shook the question away as he directed his attention, and the conversation, toward her friend, several feet in front of them now. "You know, I've got to wonder why you needed us," he said. "Your friend seems to know where he's going."

"I don't see how," she disagreed, her breath coming in little pants as she negotiated the rugged terrain that steadily rose into the azure sky. "I've never known him to go for the hiking thing, either. This is a first for us both."

"And how long have you known him?"

A telling pause, then, "Most of my life."

The question brought her up short. Literally. Stopping in the middle of their makeshift path, she turned to face him, a defiant expression on her face. Fascinating, he thought as he mimicked her actions. His brothers, he absently noted, didn't miss a beat as they strode along in a semi-circle behind Jon, their attention focused upon him and nothing else. And then it was just him—and her, standing beneath the hickories and oaks.

Shiloh waited for the others to put some distance between them, watching as they did so, before she turned her attention back to Micah. She was nearly undone by the headiness of standing so close to him. Did the man have any idea of his potency or was she the only one he affected this way?

"Okay, you want to tell me what this is all about?" she demanded, wrapping her arms about her waist in a defensive gesture and to control her wayward longings, a vain attempt.

"This." She waved a hand between them in indication of the topic. "The interrogation."

"It wasn't exactly an interrogation," he tried to deny.

The nerve of him!

"Oh?" she challenged. "You want me to count the questions? Let's see—"

"Just making conversation. Something wrong with that?"

The fight whooshing out of her, Shiloh glanced toward the disappearing trio before responding. "No," she said and, grudgingly, "Sorry."

"Yeah." He kicked the ground between them with the toe of his hiking boot, his frustration evident in the gesture. "You sound it."

"I'm not used to people—well, strangers—asking a lot of questions."

"More than a couple."

"I wouldn't have asked them," he continued as if uninterrupted. "What's your problem? Are you this skittish with all people?"

"No, just you," she answered before she could think better of it. She wanted to kick herself. What was wrong with her? Might as well confess how he affected her, at this rate. But at least he looked as surprised by her candor as she felt.

"Lucky me," he said after a moment in which neither one of them seemed able to talk. He looked away from her, toward the slope of the wooded mountain. "We should probably catch up with the others. Who knows where your friend is headed."

"Not me." She fell into step beside him, grateful for the less taxing pace he set. "He kept the map to himself. He wouldn't let me see it. Like it was a treasure map or something. Only thing I know is it’s hand-drawn. Well, hand drawn on the computer."

"Yeah. Jon is a total computer geek," Shiloh revealed, glancing his way. "Why draw with a pen what you can do with a mouse?" She looked forward again, gave a little shrug. "That's his motto, anyhow."

"And what's your motto?"

She didn't answer right away. No one had ever asked it of her before. At length, she shrugged and told him the truth. "I don't have one."

"No? I thought everyone had one.”

To diffuse her unease, Shiloh turned the topic on him. “So what’s yours, then?” She even managed a smile as she warmed to the subject. “What is the Sloane family motto? Live by the sword, die by the plague?”

With a chuckle, Micah said, “Not quite. Try again.”

“The acorn doesn’t fall far from the oak?”

“A bird in the hand is worth two in the bush.”

“What does that even mean?”

For the first time since they met, Shiloh shared a laugh with Micah. “I don’t know! I always wondered that myself.” She paused for a moment before she dared to ask, “So what is the Sloane family motto?”

“It changes depending on the situation, but the prevailing one is ‘Family isn’t everything; it’s the only thing.’”

“That’s nice.” Before she could stop the thought from reaching her mouth, she said, “I wish I had a motto like that.”

And they were right back to where they started.

Unease trickled down her spine at the question. She flinched before she could check her response. Relax, Shiloh, she cautioned herself, covering her reaction by feigning interest in a moss-blanketed rock they passed. She inhaled a few breaths before speaking again. “I don’t know—not something we talk about.”

Why was she being so cryptic? Micah saw the way she flinched at the mere mention of her family. He knew his question, which seemed harmless to him, wasn't to her. People didn't usually react like that, unless they had a good reason. And although he hadn't known her for long, Shiloh didn't strike him as the type of person who overreacted to things. Well, at least not something like this. The mystery of Shiloh Beck deepened.