Gabby was born and raised in small town Bandon, on the southern coast of Oregon. At thirty, she’s a cowgirl, volunteer firefighter, and out and proud lesbian. It’s hard to find love with another woman in such a small town, but she loves Bandon.

After witnessing an accident involving a local town drunk, Gabby helps the arresting officer by going to the hospital to return the other driver’s wallet.

The other driver is Aneko Watanabe, a computer programmer with a flexible schedule who’s looking for a small town to move to. When the car crash sends Aneko to the hospital. Gabby goes there return her wallet.

Something sparks between them. As things heat up between the two women, Aneko moves to Washington state a job. Will the distance come between them? Or can they find a way to make things work? 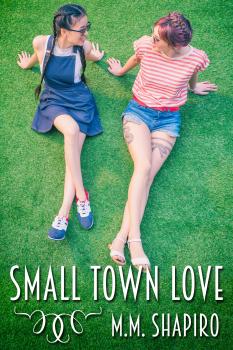 After work, Gabby stopped at the Chocolate Mart in Old Towne Bandon and selected a small assortment and had them gift wrapped. They were far from cheap, but it should brighten Aneko's day. She waltzed into the hospital.

The nurse on duty, Maria, stopped Gabby. "Gabby, you're a wonderful friend. Aneko can't stop talking about you, and she's not taking much pain meds. You should become a nurse."

That brightened her. "Thanks, Maria. May I see her?"

"Sure. Go on in." She began to turn and faced Gabby. "I haven't been able to find out her status, but she is beautiful and not married and no kids."

Gabby grew a crooked grin. "Thanks, Maria, you're a sweetheart."

She walked in. Aneko was asleep in bed with a book opened over her chest. Gabby put the box of chocolates on the table and picked up the book and read to kill time, and it shocked her. The cover was two women kissing, one in a police uniform, and the title was Lesbian Love in Louisiana. She was putting the book back when Aneko's eyes opened and stared at the book. Both were silent.

Gabby said, "Sorry. I was just curious what you were reading." She swallowed at her heart that jumped in her throat. "Lots of straight women read gay or lesbian stories."

Aneko's face went flat. "I don't hide who or what I am. I am a lesbian. I hope that doesn't upset you."

Gabby's head and face heated. "I came out in high school." She took her cowboy hat off. They stared. "I think you're very pretty, but that's not why I come back and befriended you. I think everyone in the hospital needs a friend to visit them." She handed the box of treats to Aneko. "And I convinced myself the odds of you being so bodaciously pretty and being a lesbian were greater than the odds of winning the lottery."

Aneko held her hand out. Gabby took it and Aneko reeled her in and down, kissing her cheek. She opened the box, and said, "Oh, I love chocolate. Thank you so much, and after all you've already done for me."

A tingle ran through Gabby's body and ended in her love tunnel, which moistened.

Aneko said, "I get discharged tomorrow. Surprisingly, my insurance company has talked with the tow company, which also does body work, and they have authorization to do the repairs. I called the body shop and they said four weeks to get the parts and do the work. I have to go to Coos Bay to rent a car. My insurance will pay for it."

"I can drive you there. A taxi would be too expensive. It's twenty-five miles one way."

"I also need to get a motel for the duration. Can you recommend one?"

"I like The Bandon Inn. It's off the main highway on a hill with awesome views of the river and ocean. Pretty reasonably priced, too. But there are less expensive ones, and-" She stopped talking. Their eyes locked.

Aneko hushed, "I think you are most awesomefully pretty. I love cowgirls. May I have a kiss, please?"

Gabby leaned down and their lips met, tentatively at first, and then they locked down. Aneko held the back of Gabby's head, and Gabby did the same. Gabby had stopped breathing and she huffed a breath in.

Maria the nurse walked in and said, "Oh" and walked out.

Time passed and they broke the kiss but held hands. Gabby said, "I love Japanese women."

"Thank you. I love cowgirls."

Gabby leaned down again and the resulting kiss ended in tongue use. When she stood, Gabby giggled. "We haven't even had a date yet, and we're kissing."

"I want to have a date with you. You're friendly, energetic, altruistic, and pretty."

"Thank you. I want to date you, too, but you won't be here long. I hope we don't fall in love." She lowered the side rail to be closer. "I don't even know what kind of work you do."

"I'm a computer programmer. I work from home a lot, but I'm due in Washington state in three weeks for a temporary job. It's supposed to take about three months, but things often run over. I left early so I could explore, try to figure out where I want to live. I know I want a smaller community, certainly under 25,000 people."