When firefighter Grady Ashcroft adopts his deceased sister’s son, he knows life will change. He never expected to be a dad, but he’ll give young Jamie his best, even if it means a celibate life in a new home. He does not expect to find the man of his dreams in the Colorado village where he takes a new job, either.

Sullivan Parker wanted to be chief of the Valle Vista fire department when the former chief was forced to leave. Instead, the town council hires a stranger from far away. Despite his resentment, Sully finds himself drawn to the newcomer. He also discovers a need to take Jamie and the spotted pup the former chief left behind under his wing.

Can the brotherhood of battling dangerous blazes morph into stronger feelings for the two men, or will conflict prevail?

With steadier movements, Sully jerked the oxygen mask of his face. “I’m good,” he rasped. “Save it for her. She don’t look good at all.”

He stood steadily enough and reached to turn off the connection for the hose to the mask he’d removed. Then he wheeled around to start toward the main truck, which still pumped out water. At the same instant, a sudden crash shook them. Sparks flew as the barn folded in on itself. For a short time the fire leaped. However it soon subsided, much of its fuel clearly gone, while the rest of the ruined building was now saturated and cooling.

“Sit down and give yourself a break.” Grady roared out the order. “Things are under control and you fucking well aren’t going to risk more strain right now. That’s an order, in case I didn’t make it clear.”

Sully stopped, looking back with a poisonous glare. “I know my limits. I’m not going to endanger anyone. Leave me be.”

Although most of Grady’s attention focused on the unconscious woman, he glanced up at Sully. “I said sit. Do it, or I’ll write you up for insubordination.”

Sully managed a raspy laugh. “Do I look like I care? You can’t fire volunteers, big shot. If you keep hassling me, I might just quit.”

Grady was saved from a reply that might have made matters worse by the distinctive whaps of the approaching helicopter. He left the woman in the care of another firefighter as he grabbed a flashlight and went to direct the chopper to a clear landing.

The EMTs lost no time bundling up the victim and getting her aboard. Grady thought about sending Sully with them, but when he looked around, the other man had disappeared. The chopper had lifted clear and headed away before Grady found his second-in-command in the cab of the truck they’d brought to the scene. Sully leaned on the steering wheel, resting his elbows in its lower curve and holding his bowed head in both hands. His helmet lay in the passenger seat. By all appearances, he was totally done in. Breathing smoke could do that to a person.

Grady gulped. The surge of sympathy and concern sweeping over him took him by surprise. It felt like more than the normal worry he should have for a member of his team. He’d always treated the firefighters under him like brothers and sisters, but he’d also maintained an insulating distance and never let any of them inside his protective shell. That was way too risky. He damn sure wasn’t going to do it here!

Sully made him mad as hell, although some sixth sense insisted the often-belligerent mechanic was a good man, someone he could trust and count on. Did he dare accept that intuitive assessment? Maybe now was a time to test it. Under the moment’s pressure, he forgot the other side of his feelings about Sully, the risky, incendiary tingle of attraction. Without giving himself time to analyze his motives, he reached through the open window and put his hand on Sully’s shoulder.

At the unexpected touch, Sully jumped. He didn’t think he’d fallen asleep, but then again ... even before Grady’s voice came, low and a bit rougher than usual, he recognized the hand still resting on his shoulder.

“Hey, bud, you okay? I’ll run you back to town before I come back to start tryin’ to find out the cause of this blaze. You really need to be checked out for smoke inhalation—you know how nasty it can be, even clean smoke from hay and construction wood.”

“I’m okay. Back off. I’m not your fuckin’ kid or something.” Hearing the harsh growl in his tone after the words came out, Sully cringed. Shit, the guy’s just trying to be decent. No need to take his head off. But he’s buggin’ me here, too fucking nice or something. Too close, too much like a lo -- Shit, no way!

“I’m okay,” he repeated, this time in a milder voice. “Tired, sure, but nothing more serious. I know what to watch for. If I still feel a little off after a few hours of sleep, I’ll go to the clinic tomorrow before I open the garage.”

“I’m driving back anyway,” Grady said. “Scoot over or get down and go around.”

Sully grunted, straightened, and slid across the worn bench seat to the far side. He knew when it was time to give in, perhaps with a touch of ill grace, but just do it. The five-mile drive back to town seemed to take a long time, what with both of them stiff and silent. A strange tension sizzled in the air between them. They both stubbornly continued to ignore that particular elephant in the parlor. 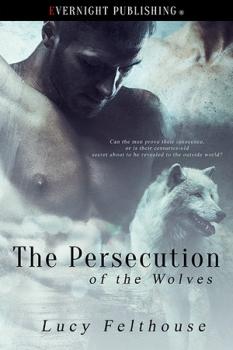 The Persecution of the Wolves (MM)
Lucy Felthouse
In Shelf
$5.99