Briana Redmond isn't best pleased when three tough ex-marines arrive at her Montana lake house, even if she does admire the view. Sabotage? No one's trying to sabotage her efforts. She's just had a run of bad luck, hasn't she? She absolutely doesn't need three bare-chested hunks crawling all over her roof, or over her.

Fergal Stanton, Gus Dalton, and Harley Osborne soon realize that someone doesn't want Briana living on the lake. But who, and why? Searching for answers gives them an excuse to hang around and make themselves useful. The guys can't resist the challenge of awakening Briana's latest sexuality, if only to prove a point to her. Engaged in steamy sex games, they take their eyes off the ball, leaving Briana in a life-threatening situation. Will they be in time to save the woman all three of them have fallen for?

Briana was pissed when she heard an engine approaching, figuring it had to be Greg returning to try and change her mind about dinner. She was so far off the beaten track that nowhere came here by accident. What was it about the Greg anyway? Hadn’t he heard of telephones? She didn’t want to be bad friends with him, but she could do without the interruption. She could pretend to be out, she supposed, but he’d know she wasn’t because her car was outside. With an irritated sigh, she put down her plaster tray and went to the front door.

What she saw there stopped her dead in her tracks. Three strangers had just climbed out of a truck and were focusing devastating smiles on her. The sight of all that masculine vitality—bulging muscles and hard, taut bodies—sent her stomach into free fall and, goddamn it, made her juices flow. It had been a while.

She moistened her lips and tried to speak, but her voice sounded like Minnie Mouse on steroids. She cleared her throat and tired again.

“We heard there was a B and B someplace around her,” one guy answered. “We’re looking for a weekend’s fishing.”

“You’re a year too early,” she replied. Please come back when I’m open.

Briana’s words trailed off, and a fulminating anger kicked aside the lustful thoughts that had slipped past her guard. These guys hadn’t come upon her place by chance. No way! Besides, how would strangers know she was thinking of opening a B and B sometime before she died of old age? They’d been sent here by someone to check up on her, and it didn’t take a rocket scientist to figure out who that someone had to be. Despite their casual clothes and long hair, the way they moved with precision and authority like a well-oiled machine screamed of the military.

“My father sent you,” she said through tightly gritted teeth.

“Busted!” the third guy said with a killer grin. “You must be Briana.”

“And you gentlemen must be leaving.” She folded her arms beneath her breasts and glowered at them. “I don’t know why my dad thought I needed anyone to hold my hand, but I can assure you I don’t.”

The first guy stepped forward, and she expected him to argue the toss. Given the state of the place when seen through a stranger’s eyes, she couldn’t altogether blame him if he did. Even so, she’d give him a piece of her mind if he dared to try it.

Instead he stuck out a large hand, and she instinctively took it. As soon as his long fingers curled around her palm, she regretted doing so. A disturbing thrill jolted her body as the warmth from his hand transferred itself to her entire body, creating a bewildering paradox of pleasure and longing to thrump deep within her core.

“I’m Fergal Stanton,” he said, still trapping her hand inside his. “This here is Harley Osborne.” The guy with light-brown hair and turquoise eyes waved to her. “And last but not least we have Gus Dalton.”

“Hey there,” Gus said, his dark-blond hair lifting in the breeze, soft gray eyes sparkling with something she couldn’t quite identify as they regarded her. “Nice meeting you.”

Briana snatched her hand back. “Nice meeting you all as well, but as you can see, I don’t have anywhere to put guests right now. So, if you’ll excuse me—”

“I have a suggestion to make,” Fergal said. “Your daddy’s real worried about you, and he sent us to check you’re all right.”

“Well, you’ve seen me and you can tell him that I’m just peachy.”

“No, you’re not,” Fergal said softly.

“Who the hell?” How could they possibly know things weren’t going as planned? “Ah, now I get it. Seth and Maurice. I might have known.”

“Two old guys who live in town. They were friends of my grandmother’s.” Briana tried not to smile but couldn’t hold it in. “Every day in the summer, they’re to be found at a table outside the barber shop, drinking coffee and shooting the breeze. In the winter they transfer inside the shop and it’s more of the same. Nothing, and I mean nothing, happens in this valley that they don’t get to hear about. Dad must be in touch with them. Hmm, I shall have words to say to those two interfering—”

“Isn’t it nice to have people who care about you?” Gus asked.

“Caring is one thing. Interfering is something else.”

“Why don’t we come in, visit for a while, and then, if you still want us to leave, we’ll go.” Fergal shrugged. “Thing is, we have to report back to our boss and tell him everything’s okay, so he can reassure your old man. Wouldn’t be doing our job right if we didn’t at least  go that far.”

“And who’s going to finish plastering my wall while we waste time talking?”

“We will,” Harley and Gus said together.

“That’s not what I meant,” she replied hastily. It would mean they’d have to stay. The lodge was large, but it wasn’t big enough for the three of them and her to cohabit without them invading her personal space. Besides, accepting their help would be a sign of weakness. “I don’t need your help.”

As though reading her mind, one of the guys slid his hand inside her panties and rubbed his palm teasingly across her mons. Briana moaned. Having three men touching her, exploring her, teasing her, was beyond anything she’d imagined feasible. Pulsating warmth tumbled through her, shards of pleasure blasting her body from all sides as Fergal dropped a sizzling line of damp kisses across her shoulders and continued to play with her tits. Her other stocking disappeared, along with her garter belt. Her panties fell around her ankles, and she was now completely naked.

“Lie down, Briana,” Fergal said. “This way, with your head closest to the fire. Lift your arms above your head. Harley’s gonna fasten them to the fender.”

“Oh.” She scrambled into position, glad that the only illumination in the room was provided by the fire and candlelight. Perhaps they hadn’t been able to see her well enough to notice the flaws. She was glad to delay the inevitable.

“Not oh,” Fergal said sharply, tapping her thigh. “You have to earn this. Ask Harley to cuff your wrists.”

“Please, Master Harley,” she said, biting her lower lip to stop herself from laughing or, worse, from her excitement becoming too evident. “Would you fasten my hands to the fender, please?”

Gus carefully placed his creamy dessert on a nearby side table, which is when Briana realized what they had planned. They hadn’t brought any plates from the dining room because they planned to use her body as a serving station. Her already sopping cunt leaked a little more and her nipples beaded. Bring it on, boys!

All three men removed their shirts but kept the rest of their clothing in place. She wanted to object but already knew better. It was a real turn-on being at their mercy and only being allowed to speak when spoken to. If they wanted to give her pleasure with their mouths and tongues before she got to see them as nature intended, who was she to complain?

She feasted her eyes on their gorgeous chests, wishing she could photograph them again at such close quarters. Gus took a large spoonful of cream and dropped it onto one nipple, sending all thoughts of photograph out of her mind. Harley did the same with the opposite one. Together they bent their heads and feasted on her tits, sending Briana’s body into sensory overload. They sucked and nipped, their hands kneading the ample flesh almost savagely. At first it hurt and she tensed up.

“Relax into it, honey,” Gus raised his head to say. “Let the pain work for you.”

Oh really? Well, she’d try anything once. Briana forced herself to breathe deeply and placed her trust in them. Astonishingly the pain gradually became pleasurable, and she gasped with surprise.

She couldn’t see where Fergal actually was since he’d abandoned her shoulders. His voice came from the vicinity of her feet. It sounded as though he approved, and she was ridiculously glad to have pleased him. Something flashed, causing her to jump against her cuffed hands. When her vision cleared she realized that Fergal had used her camera to photograph her in the nude, being used as a dining table by two randy hunks.

“Seems only fair, Briana. You photographed us without our permission, which, incidentally, will earn you a spanking later on.”

“Yes, Master,” she said, getting into the way of things and having a ball. “I was wrong and must be punished.”

“Bring your knees up and spread your legs wide,” Fergal ordered.

As soon as she’d done so, acutely aware that her cunt would now be open to them and on clear view, the camera flashed again. Several times. Well, if they thought her pussy was worthy of being recorded for posterity, that was fine by her.

She heard the camera being placed on a table and became aware of a large presence crouching between her legs, blowing softly on her clit. She gasped, only just managing not to elevate her body in her desperation to have the lips that were doing the blowing a lot closer. Was Fergal finally going to fuck her? It had to be him. She could see Gus’s dark-blond hair flopping over one of her tits and Harley’s light-brown crowning glory making itself at home on her opposite side. Her pussy lips were pulled apart and something cool was smeared over her pubic bone. Oh my, cream! More was pushed inside her. Then her legs were lifted and thrown over a pair of wide shoulders.

She felt more cream being rubbed into her midriff and lips and teeth assiduously removing it. Fergal’s lips latched onto her pussy, and she cried out, pushing her hips into his mouth. He immediately withdrew, and she protested with a cry of disappointment. She really liked his mouth. She especially liked what he’d been doing with his tongue, and she definitely didn’t want it to stop.

“Keep absolutely still, Briana,” Fergal said. “If you move your hips again, we’ll send you to bed. Alone.” They wouldn’t? “Do you understand?”

It appeared they would. Either way, Briana wasn’t prepared to risk it. “Yes, Master Fergal.”

“Good girl. Now keep still and let me eat my dessert. I’ve got a terrible hunger to satisfy.” 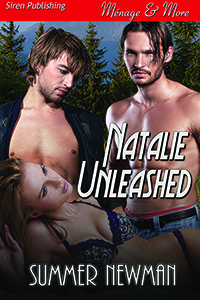