In the vast chasm of space, wRen defies a submissive heritage, braving the dark legends of the Asp to be with VeIper, enemy to the Kin, the protectors of her Nestling.

VeIper seeks to free his species from ethnic cleansing as well as win the awe of the beautiful and defiant wRen. Unfortunately, Mong, a slayer, has already claimed wRen and vows to destroy those of VeIper's kind.

With each seeking their own vision with insatiable intensity but with Mong's impervious power, is the surrender of wRen and the death of VeIper pre-destined? 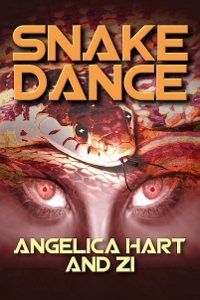 VeIper did not know this to be the dance of seduction of his species. He only understood the rightness of it, followed the lead of the inferno churning in his groin, and relished in the mounting need for what was to come. His flesh nearly meshed with hers, though unbeknownst to her and so apparent to him, he almost knew they had melted as one. Still, there was that whisper of air between them, yes, that distance that he longed to bridge, yet, did not. The pleasure was so grand, the harmony so perfect, and the dichotomy of pulls so odd. Touch her. Enjoy what he had. Run. Alas, they continued this yearning dance, her unaware of him, and he all too aware of her.

The wind became more intense, wrenching new and novel sounds into music. wRen’s humming switched to nonsensical notes causing the music within her to flow almost gush, resulting in her body hunching and expanding, to bending and whipping about, her hair and feathers alive with new tones, tones of wicked allure, and maiden sounds they were lifting, stinging VeIper, he reveling in that bite, it a sharp-toothy smile forced by instinct. Amidst the change in tempo he did not miss a shift, not a gesture or nuance. Whimpers of need, strangled breaths of longing seeped into her music and VeIper shadowed them as well but so perfectly in unison with hers that she did not realize, did not hear the echo. On and on the intoxicating lissome body waves continued, away from the stream, and then closer to it, through it and back, a winding wend, a slinking followed by a twist that reflected itself in a duet of shadows. Slow spins unwinding then tightening again, they a spiral helix of two bodies bound as one.

Lost in the cycle of fantasy.